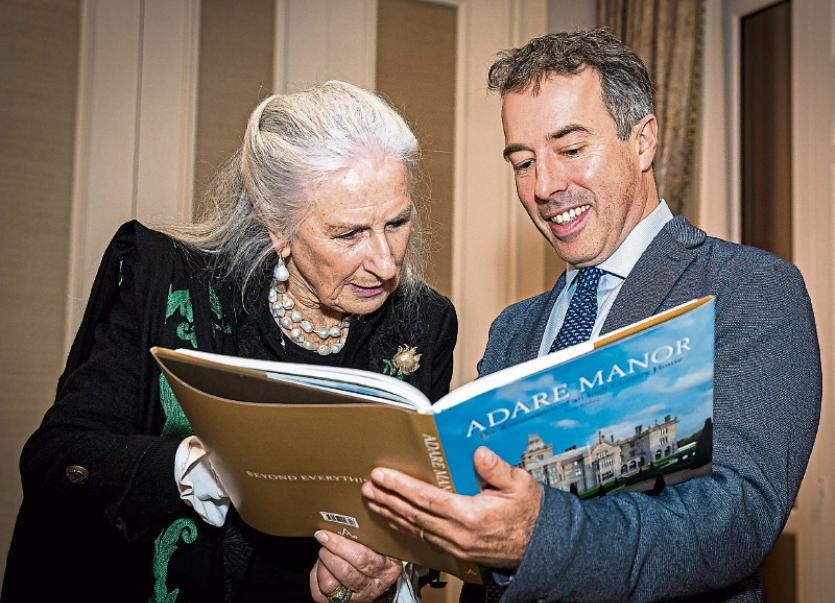 Author Turtle Bunbury with Lady Geraldine Dunraven at the launch

Above is one of the many striking quotes - this by Edwin, 3rd Earl of Dunraven - to feature in a new book just published, Adare Manor, The Renaissance of an Irish Country House, penned by Turtle Bunbury.

This quote along with many stories and illustrations in the book convey the great bond between the Dunraven family and the people of Adare, which continues today.

This remarkable cord is further illustrated during the time of The Famine and a report from the Dublin Weekly Nation in February 1848 which is quoted in the book reads: “Our correspondent states that none of Lord Dunraven’s people have gone to the workhouse - that all have employment - and that even the female children, in the well attended Adare school, are paid for their needlework.

He says there are three hundred labourers employed by his lordship, each holding cottages and ground from him, on easy terms, and between forty and fifty tradesmen kept constantly at work. He also speaks of the humanity of the Countess Dunraven, who distributed a vast amount of clothing to the poor people, not, he says, by way of charity, but as Christmas gifts.”

At the launch of the book last week in Adare Manor was Lady Geraldine Dunraven, the last of the great Irish family to live in the Manor, with the late Thady Dunraven, the 7th and last Earl of Dunraven. As a 17-year-old he contracted polio, but this did not deter his enthusiasm for life.

In 1969 he married Geraldine McAleer, a daughter of Air Commodore Gerald W. McAleer. He opened Adare Manor to the public in 1968 and he and Lady Geraldine twice offered the property to the Irish State before selling to Tom and Judy Kane in 1987. They converted it into a hotel and built a golf course on it, before selling to JP and Noreen McManus in 2014.

Fittingly, Lady Geraldine was present at the book launch and told me she had read the publication “from cover to cover”.

“The author, Turtle Bunbury, has been a friend of our family since he was about 10 and he absolutely loved my husband so he’s dedicated the book to him,” she said.

She said the general public always got to share in the beauty of the Manor.

The construction of the Manor was primarily overseen by Windham Quin, 2nd Earl of Dunraven and his wife Caroline, who had, the book reveals, travelled extensively through England and Europe in pursuit of ideas for their architectural dream.

But they ran into financial problems managing the ailing Wyndham estates in England and Wales and would not realise the scale of her inheritance until the mid-1820s when, like a Gothic fairy-tale, it emerged that the Dunraven estate in Wales was sprawled upon one of the richest coal seams in north-west Europe.

“The income from the coal would subsidise Adare for the remainder of the century, not least during the Great Hunger of the 1840’s when many other Irish estates went bankrupt. It also enabled Windham and Caroline to embark on the massive building project at Adare, where they lived together from 1826 until Windham’s death in 1850.”

Speaking at the launch, Colm Hannon, Adare Manor, chief executive said: “Adare Manor has always been an integral part of the local community and south west region, and we wanted to capture and share the rich history and story of this beautiful place. From the Dunravens who had the inspiration to create a neo-Gothic masterpiece modelled on the great houses and cathedrals of Europe over 180 years ago, to the McManus family today who believed this gorgeous setting had tremendous potential to become a world-class destination. They wanted to create a resort with all-year-round appeal for both Irish and overseas visitors that would also help to promote and develop the region.

“Turtle Bunbury, editor of this fine book and his team have spent two years researching, listening and learning all about the life of Adare Manor, to ensure the book represents the wonderful history of this magnificent property. We are delighted with the final publication.

“I would like to say a special thank you to the custodians throughout the years, from the Dunravens, to the Kanes, to the McManus family. Through their combined appreciation of the heritage and architecture, Adare Manor now stands among the top resorts in the world. This special book captures their contribution, and the contribution of everyone who has supported them through the years, safeguarding Adare Manor for generations to enjoy and visit, who will create the next chapter in Adare Manor’s history”.

In a foreword JP and Noreen McManus reveal their delight with the “great response from guests who have visited Adare Manor and from golfers who have played the course. Everyone here understands the importance of absolute attention to detail in everything that we do, whilst delivering the highest quality of customer service. Our aim is to constantly exceed guests’ expectations, ensuring that Ireland can compete with the best internationally.”

This elegant hardback coffee table book consisting of almost 200 pages is superbly woven together by the author, an award-winning author and historian, with excellent images going back over the centuries with enthralling stories about the Quin, and Wyndham Quin families, including the seven Earls of Dunraven.

Not only does Turtle Bunbury cover the fascinating story of the Manor but also encompasses the significance of many other historic buildings in Adare including The Desmond Castle, The Abbeys of Adare including, The White Abbey, The Franciscan Abbey and The Black Abbey.

Interestingly, the book also tells the story of the purchase by JP and Noreen McManus of the Manor in 2014 and the fascinating redevelopment of the facility including photographs during construction and the completed product which will host the Ryder Cup in 2026. The book at €60 is not cheap, but if you are from Adare or are interested in history this is value for money. You can only buy it by visiting Adare Manor or online at www.adaremanor.com