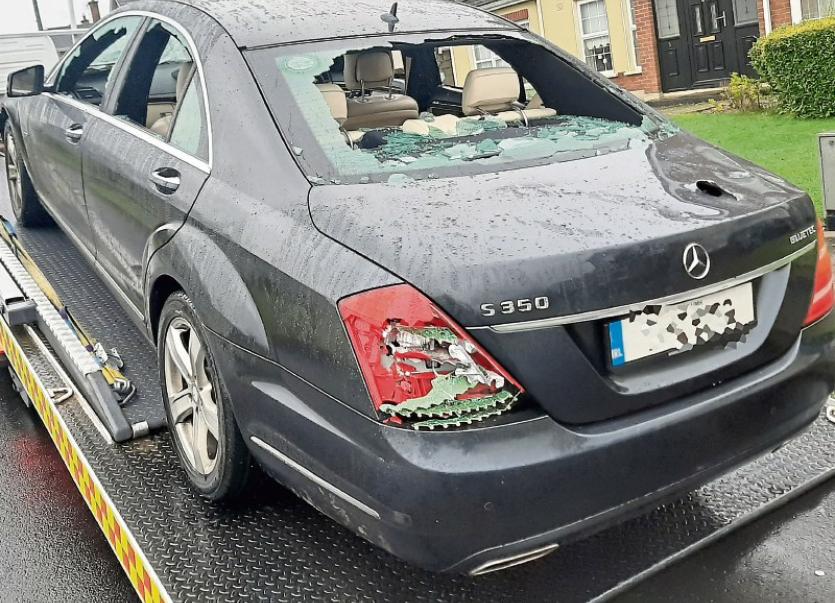 MASKED thugs have attacked the family home of a Limerick councillor leaving his wife and children “traumatised” and “fearing for their lives”.

The home of Independent councillor Fergus Kilcoyne, who lives in the village of Patrickswell was targeted in the early hours of Monday.

Cllr Kilcoyne’s front windows were smashed, while the vandals, who were wearing balaclavas also caused thousands of euro worth of damage to his car.

Gardai are investigating the shocking incident, which, according to local TD Niall Collins has left the local community “outraged”.

“An attack of this kind on a hard-working local public representative is an attack on the entire local community. This intimidation can not and should not be tolerated. I would appeal to people with any information that may help to contact the gardai in confidence immediately,” Mr Collins told the Limerick Leader.

While Cllr Kilcoyne - a publican in the village - did not wish to comment, sources close to the former Fine Gael man said his wife Josephine is so scared, she no longer wants to stay in the family home.

The incident took place at 4.45am on Monday of this week.

Cllr Kilcoyne and his wife were awoken by loud bangs on their house, as the thugs smashed eight panels in the bay window at the front of his house, one by one.

His stained glass front-door was also smashed in, before the vandals moved across to his Mercedes car.

All the windows were smashed in, while the boot was hacked with a tool. The body of the motor was damaged, while both wing mirrors were also smashed.

They then moved onto his wife’s car, a BMW, smashing the back windows, and the rear lights.

Chillingly, sources have said the vandals then walked slowly back to a getaway car, before making a getaway without their headlights on.

One of the councillor’s sons, who was in the house at the time, then made contact with the gardai.

A friend of Cllr Kilcoyne, who did not wish to be identified, said: “He’s lucky in a sense they didn't throw a petrol bomb inside his door. Is this a warning?

Cllr Kilcoyne, whose nephew is Munster star Dave Kilcoyne, is “deeply disturbed” by what happened, as are the local community.

“The people in Patrickswell are very disturbed and upset by what has happened here. He is someone who is highly respected in the community. He's a sitting county councillor elected by the people. The Kilcoynes are a tremendous family. They are so generous within themselves. They want immediate answers. We want the gardai to do their utmost. We do realise the guards will do their best,” the family friend added.

Gardai have confirmed they are treating the matter seriously and that detectives from Roxboro Road are assisting local gardai who are stationed in the village.

House to house inquiries have been carried out this and CCTV has been obtained as part of the investigaton.

Members of the divisional scenes of crime unit were also deployed and carried out examinations at the scene on Monday.

“Gardaí are appealing for anyone who was in the Barnakyle area between 4.30am and 5am on November and who may have witnessed the incident to contact gardaí in Roxboro Road on 061- 214 340,” said a spokesperson.

If you witnessed the incident, or have any further information, please telephone Roxboro Garda Station at 061-214340.