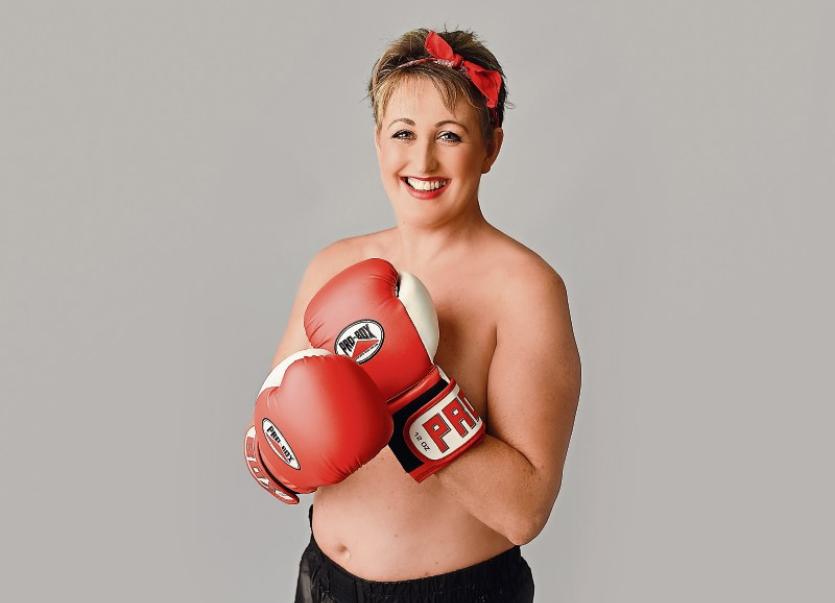 Meg Wiley in a pose from the upcoming calendar

TWELVE gutsy ladies have revealed their naked ambition to assist the Mid West Cancer Foundation by baring all for a fundraising calendar.

Kilmallock mother-of-two Meg Wiley Curran has been raising funds for the Mid Western Cancer Foundation through her successful events project, Pinkalicious by Megalicious.

It was a huge fundraising success with all proceeds again going to the Mid Western Cancer Foundation.

With a total of €30,500 handed over to Professor Rajnish Gupta and his team in 2019, Meg is ready for her second year of fundraising for the Mid West cancer Foundation.

But, this year, she’s changed things up a bit. In October, the screening took place of the movie, Calendar Girls, in Friars’ Gate theatre and at the end it was announced that Meg was looking for 11 women to bare all with herself for a great cause.

“The calendar is not in any way offensive, it's very tastefully done by a female photographer Aggie from justforyou photography,” Meg explained.

“We had some amazing photos taken in the beautiful Kennedy Rooms in Bruff on October 31.

“We had a few sociable drinks to settle the nerves before getting our tops off and laughed at how it was a Halloween night we wouldn’t forget for a long time.”

When asked if she found it difficult at all to get ladies to appear in the calendar, Meg said, “not at all, actually, and all my ladies who are in the calendar are in it for the right reasons.

“All my ladies have their own story and the props used for each picture were individually picked by relevance to the person fighting or who has fought cancer.”

This is not your typical ‘February for romance’ or ‘October for Halloween’ calendar. Each photo has a personal meaning or holds a memory for the person the lady appears in the calendar for.

“And just to add a bit of fun, my ladies have remained anonymous so it’s creating a bit of a stir as to who will be January, February or March,” Meg explained.

Calendars will go on sale on December 1 in local businesses in Kilmallock, Charleville, Bruff and surrounding areas.

The calendar girls will also be selling at local Christmas markets. Calendars are  priced at €20 and all funds raised will go to the Mid West Cancer Foundation in University Hospital Limerick.

A night to commend the calendar girls will then be held in Mike Houlihan's 41 Bar, Kilmallock on January 4, 2020. Last January’s event proved a huge success with over 700 tickets being sold. Meg hopes next January’s event will be just as successful and that it will bring people closer in the town. Tickets will be sold in local businesses for €10 and this includes entry into a raffle with the first prize being a whopping €1,000.

When asked about her health at the moment, Meg said that she is doing great.

“I had a full hysterectomy in February and started a new drug which I take every day for three weeks and then a break for one week. It's working well for me, and my team in UHL are very happy with how I'm getting on. I will have a scan in January so that could tell a different story but we will cross that bridge when we come to it. And in the meantime I simply enjoy life, and try not to let it take over my head too much. I have to get up and on with it for my two boys, Jack and Scott, and for my husband and family.”

Meg was named Limerick Person of the Month for December 2018 and attended the Person of the Year awards in Feb 2019. “I didn't win,” she said with a smile “but the All-Ireland Champions of 2018 did so I was happy about that. It was a beautiful day out and an honour to be nominated.”

Meg would like to thank Aggie from justforyou photography, John and Rebecca from The Kennedy rooms in Bruff and of course a big thanks to her Calendar Girls “without whom this would not be possible”.