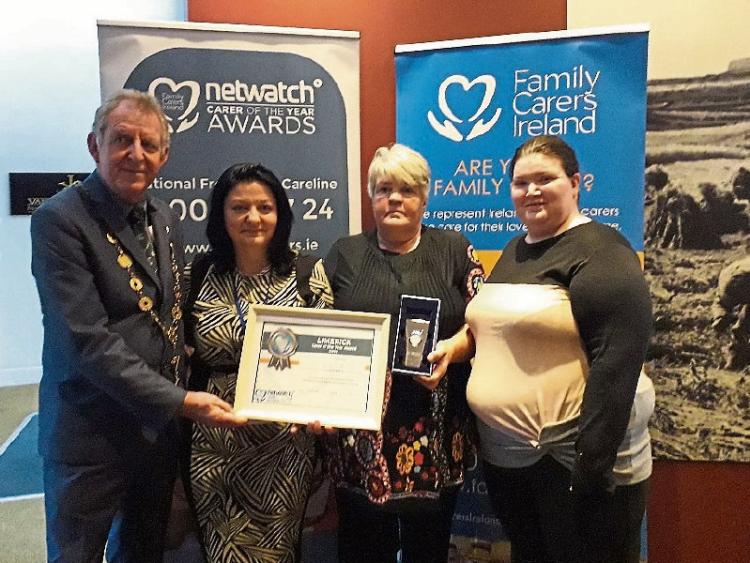 CARING for others has been a lifetime vocation for Frances O’Donoghue from Kildimo who has been named Limerick Carer of the  Year.

“My first job was minding an elderly woman. It was something I always wanted to do,” she told the Leader after the special ceremony in Limerick attended by family and friends where Frances received her award.

Presenting the award were Mayor of Limerick City and County Michael Sheahan and rugby stalwart Mick Galwey, who is a Netwatch Security Brand Ambassador.

“I am a homebird,” Frances admitted. But she was glad to have made it to the ceremony and “very pleased” to be honoured.

Frances, Mayor Sheahan explained, has been a full time carer for the past 28 years.

“She cares for her daughter Michelle who was born with chronic kidney disease and is now a transplant patient, and she also cares for her husband, William, who is 80 years old and  was diagnosed with dementia five years ago and who also has regular kidney infections.”

It was Frances’ daughter Michelle who nominated her for the Netwatch Carer of the Year Award and the judging panel concluded that Frances’ caring role was of high intensity,  caring 24/7 for her daughter and  husband, at huge personal sacrifice.

“Her resilience and ability to keep caring is why they judges selected her as Limerick Carer of the Year,” the judges said.

Frances herself said she didn’t find the caring role challenging. “I take every day as it comes,” she said. And she admitted to being a very calm person who keeps her cool.

But Frances has met with difficulties. Fourteen years ago, she lost her son William in circumstances which have never been properly clarified and last year, her daughter Michelle had to undergo a second kidney transplant when the first transplant operation didn’t work.

Frances will not represent carers from Limerick at the National Netwatch Carer of the Year Awards 2019 in Dublin on November 22. This gala awards ceremony will be hosted by Family Carers Ireland patrons, Mary Kennedy and Marty Whelan.

This is the 13th year that Family Carers Ireland are recognising, through the awards, the contribution  and commitment of Ireland’s 355,000 family carers to the care of their loved ones, often at huge personal cost.

“These individuals are ordinary people doing extraordinary work; they are our family, relatives, neighbours and friends; they are living in every town and community in Ireland and seek to create a loving, fearless and safe environment for their family members,” said Jean Ryan,  Limerick Carers support manager.