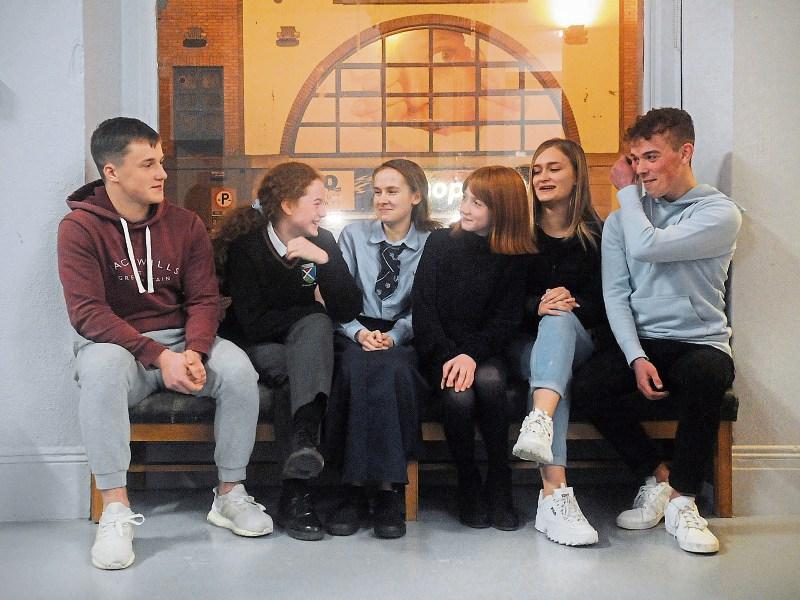 Five of the six Limerick delegates plus Saoirse Exton, who is representing Clare, pictured this week at Ormston House - Picture: Gareth Williams

A GROUP of young people from Limerick have been selected as delegates for a Youth Assembly in the Dáil this Friday.

Organised by RTÉ and in association with the Houses of the Oireachtas, the day will see a total of 157 young Irish people from 10 to 17 years of age focus and debate on the following themes; environment, economics, food and farming, power and education.

“I’ve never taken part in anything like this before,” said David, a 5th-year student in Ardscoil Rís, “but I’ve been interested in climate action for a while and helping with that however I can.

“I had a general understanding of politics before this, but this has really sparked my interest in it and has encouraged me to do more research of my own and it’s really kick-started my interest and has made me want to learn more and more,” said Jackson, who is a veganism advocate.

“I’ve always had an interest in just making the world a better place,” added Zara, who’s a fifth class pupil in Shountrade National School, Adare. “I’d love to work in politics when I’m older, so that I can have a proper say. This is an amazing chance, but I’m still a 10-year-old so I’m not yet one of those people who actually get to make laws.”

The group have been busy preparing in advance for their Dáil debates, and are confident that the Youth Assembly will bring positive change to current policy in a number of areas.

“I’ve had a look at news articles because I’m in the education group and I’ve analysed where I want to see a change in terms of our education policies,” said Gaelcholaiste Luimnigh student Saoirse.

“I feel like the whole area of education needs to be discussed more, especially by young people,” agreed Iona , who attends Crescent Comprehensive.

The delegates will debate topics between sessions in the Dáil chamber, before choosing two proposals to put forward from a total of six from each area of discussion.

This occasion will mark the country's first ever Youth Assembly on Climate in Dáil Éireann.

“Climate change is happening so fast, and we have to take actions to stop it. Sometimes people don’t listen, but as long as we keep pushing we’ll make a change,” said Marta.

“We won’t be quiet, this is only the start of us pointing out what needs to be done,” added Jackson.

“We protest every Friday, and it doesn’t matter if there’s one of us or seven, we’re still there and present so I feel like the global strikes will definitely keep going,” agreed Saoirse.

“They’re talking about giving us a voice,” she added, “what they don’t realise is that we already have a voice, we’ve cultivated it for over a year now and we’ve been yelling and banging on doors about it. It’s time to bring it to the Dáil.”