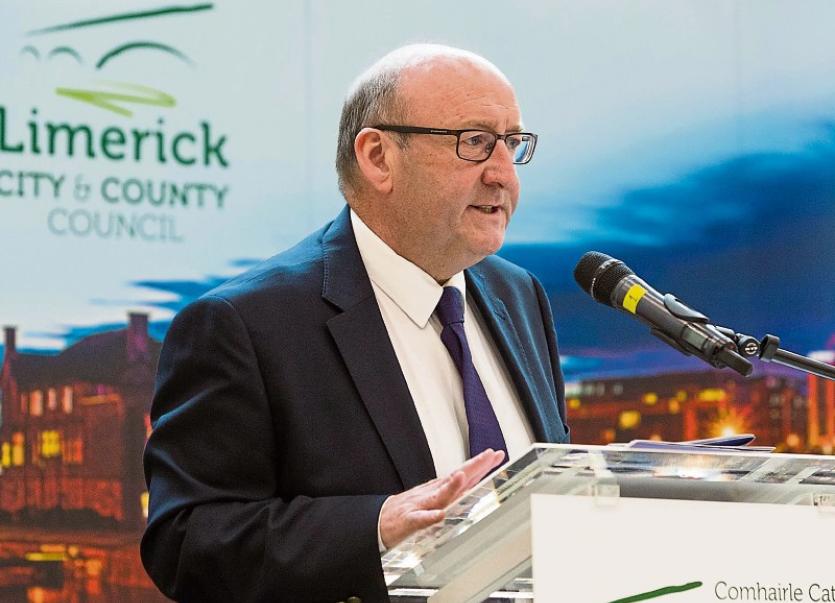 Dr Pat Daly, Council CEO highlighted housing plans for Bruff, Hospital and Castleconnell among many other projects in the council budget

TENS of millions of euro is planned to be spent on major projects to improve vast swathes of the county.

The draft budget presented to councillors this week shows more than €700m is being sought under the capital programme, and is being planned for a variety of public projects for each corner of Limerick.

Members will vote on the local authority budget this Friday, with metropolitan district leader, Cllr James Collins describing it as one which “shows Limerick’s ambition” once again.

Kilmallock, along with many areas in the south and east of the county are set to benefit hugely from the budget, with various housing schemes, and the granting of €330,000 to a Stone Mansion Interpretative Centre in the town of Kilmallock.

Some €3.7m is being sought for 15 homes in Bruff, while €2.5m is earmarked for the construction of 10 units in Kilfinane.

Some 20 homes are being proposed for Hospital, with €4.6m being pledged for this scheme between now and 2022. Four homes are planned at St Patrick’s Villas in Castleconnell, with a value of €700,000, and 12 homes are proposed at Knocklong, value €1.7m.

Ten homes apiece are also planned for the villages of Doon and Ballylanders. ​

Read also: Limerick Council earmarks €82m in budget to get Project Opera off the ground

Notably, €2.4m is on the cards for improvements to O’Rourke’s Cross on the N20, while €12m is being pledged for the M20 with hopes high it will progress significantly in the coming years.

Other big ticket items in the capital budget include €82m for Project Opera, and €3m for a proposed conference centre in the heart of the city. And €30m is planned for the Coonagh-Knockalisheen road.

Cllr Collins said: “​These are significant projects which need investment. It's good to highlight the ambition Limerick has. But we need that ambition matched by national funding."

The former mayor said it is now notable that money is coming back from the Limerick Twenty Thirty development vehicle to the council in terms of repayments of the loans local authority members provided to it.

Meanwhile, in a boost for local businesses,it looks likely the commercial rate will be frozen, following a 1.9% rise this time last year.

The commercial rate, a multiplier charge paid by business owners based on the value of their property, has often been a bone of contention for local retailers and other service providers.

But in a letter to councillors, council chief executive Dr Pat Daly warned that the authority may have to set €1.7m aside due to the fact windfarm owners have queried their rate demand – something the council has in turn appealed, becoming the first authority to do.

“This increase will enable the council to further improve service delivery,” he added.

The local authority is once again seeking to help smaller business owners with a rebate of some of the rate, with reductions for early payment.

Cllr Collins rejected claims that householders are picking up the slack for businesses, following Dr Daly’s comments on the Local Property Tax.

He said: “The figures between the commercial rate and the Local Property Tax are not comparable. Expanding tax was not a decision I took lightly. I know a lot of people are struggling to pay their bills each week.”

Elsewhere, Dr Daly revealed its planned for the demolition of the Opera site behind Patrick Street to take place over six months during 2020.

This, and the rebuilding process will take shape over a six-year period, he added.

“Next year will also see further steps taken on the Cleeves riverside quarter project with the appointment of consultants to assist in its development.

“The project will then move onto the actual planning stage with an application targeted for 2021," the CEO said.