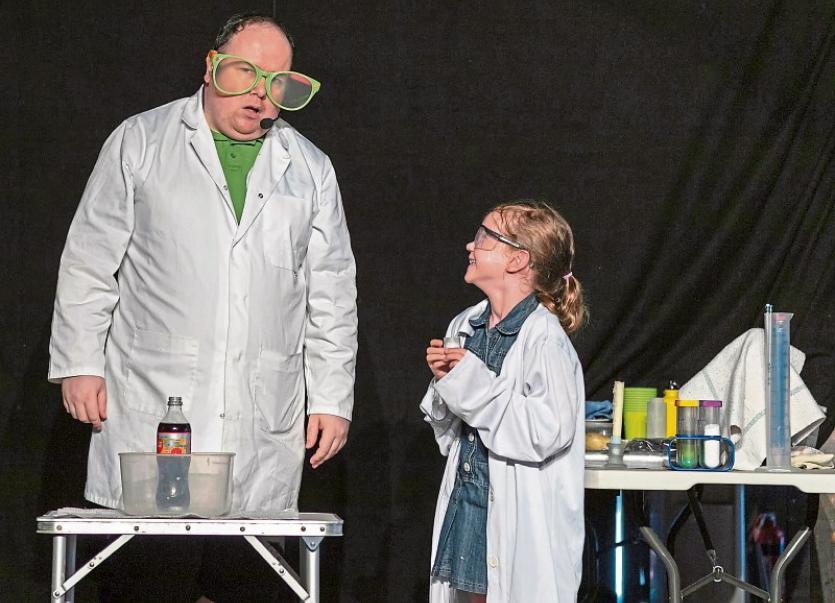 It's science week in Limerick this weekend, with some great events to get your children interested in a life of blowing things up and eventually getting paid for it.

Mickey Martin’s hosts the Limerick heats of FameLab 2019 this Thursday.

FameLab is an international competition where voices from the world of science and tech deliver three-minute talks on weird and wonderful science concepts. As it's a local heat, you can expect the quality to be mixed but you will be entertained and might come out knowing more than you knew on the way in. It starts at 6:30pm and it's a free event.

College Players take over the Lime Tree Theatre from Tuesday to Saturday this week with their production of Translations. Brian Friel's play, a favourite with amateur theatre groups, is set in a small mid-19th-century Donegal town, its inhabitants suddenly having to cope with a visit from Englishmen anglicising local place names.

There's a love triangle, recrimination and a sudden invasion from soldiers following the disappearance of a cartographer.

The play centres on the lack of understanding between the locals and the English, as the Baile Beag residents all speak only in Irish, while the invaders know only English.

For your convenience the play is written almost entirely in English, so as an audience member you can just accept that the Irish lads are really speaking Irish in the same way that you accept that everyone on stage is in a small Irish village in the 1830s.

No extra suspension of disbelief required. It's a marvellous play - you should certainly see it at least once. 8pm each night, tickets are €22 / €19 concession.

Continuing the cartography theme, the Irish Georgian Society is hosting a lecture this Thursday in the People's Museum of Limerick about Christopher Colles, the man who made a famous map of Limerick in 1769. It's rather a niche interest but that's history for you. 8pm and it's free.

He's come a long way since appearing - I kid thee not - as Andrew Strong on ITV's Stars In Their Eyes in 1994, releasing a succession of wonderful blues-infused alt-rock albums over the past ten years.

His releases this year have been a mixed bag - From Muscle Shoals, released in June, is not one of his finest albums but he followed that up in September with To Memphis, which is truly a wonder.

This is your gig of the week and you will not be disappointed if you go. 8pm, tickets are €20.

Irish comedian and science communicator Dónal Vaughan is at the Belltable this Friday with his Science Magic show.

Kids will learn the wonders of chemistry while simultaneously doing what they do best: making an utter mess.

There are very few tickets left for this show, so book early. It starts at 7pm and tickets are €8.

You can learn the science of superheroes with Marvel uberfan Barry Fitzgerald, take part in a range of fizzing and popping experiments, see a mini-zoo with reptiles and bunnies (hopefully not in the same enclosure) and, for the smaller children, have a go at the kiddie craft corner. It runs from 11am to 4pm and it's free.

All four plays have connections to Limerick, ranging from a modern-day Limerick reimagination of Hamlet ("to be or not to be... a gowl") to a fast-paced weekend in Paris for a Munster match. You'll see twenty minutes performed from each play. It starts at 8pm and tickets are a very reasonable €7.

Limerick native Jimmy's Cousin is upstairs in Dolan's on Saturday night. While older readers might remember him from his stint with Those Stilted Boys back in the late 80s, these days he's performing vocal jazz. His debut solo album Waxwings makes for very pleasant listening early on a Sunday morning so if you like his sound, I'm sure you can buy a copy to wake up to the following morning.

He's been rather championed by Marty Whelan on Lyric FM, another thing we'll miss out on in Limerick when RTE cuts take a scythe to regional broadcasting. Doors at 8pm, tickets are €20.

He's written songs that have been recorded by Ronan Keating, Boyzone and the Backstreet Boys.

Basically, he’s the Irish Diane Warren, though he might feel slightly insulted to be called that, mainly because Diane Warren can't sing while Don Mescall sounds more than a little like David Gray.

He'll be joined by Procol Harum singer Gary Brooker, Frances Black and Paul Brady for a few songs, making this a night of some of Ireland's best singers. 8pm, tickets are €35.

Electric light is one of the three things that separates us from the animal kingdom.

The other two things are calculus and opening jars, though admittedly not everybody is good at opening jars.

This Sunday you can let your children experience the joy and amazement of electric light, as Limerick's Christmas street lights are due to be turned on at 6pm. O'Connell Street will be closed to traffic for the switch-on and will also host Christmas Dash races for charity from 2pm and choirs singing Christmas carols from 4:30pm.

You'll also spot characters from festive pantos weaving their way through the crowds. Whether or not we want it to, the delight of Christmas in Limerick begins this Sunday.