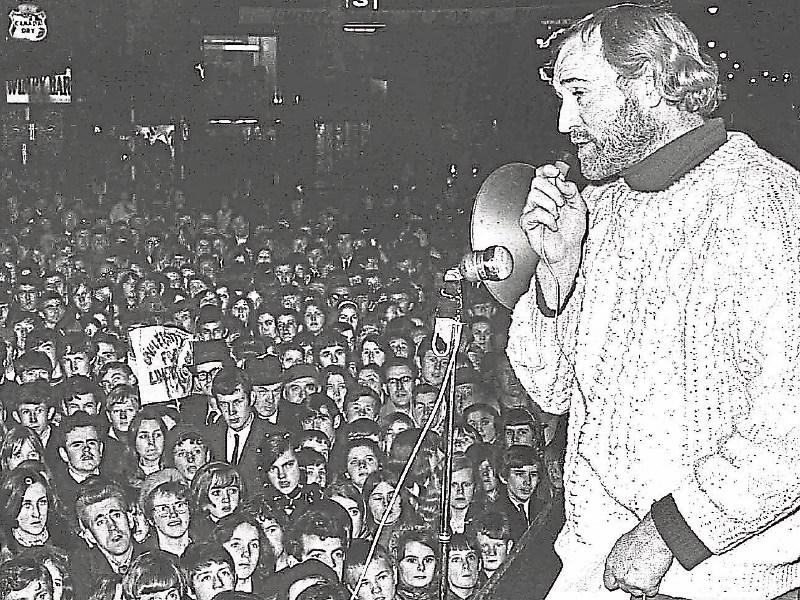 What if the university demanded by the people of Limerick for decades had been built in the city, rather than four miles away in Plassey, on a site that once contained little more than a decaying old house overlooking the Shannon river?

Back in January 1970, when a young Ed Walsh came to town with a mission to establish the place of learning we know today as UL, a handful of possible locations were considered (see interview, pages 6-7). After six weeks, the search was over. Plassey it would be and the rest is local history.

A few locations in the city were considered, but rejected – notably King’s Island. The concern was that it would take too long to acquire the land.

There was another interesting site on the market that month, in a prime location also overlooking the Shannon river — but right in the heart of the city. The building which once housed Spillane’s Tobacco Factory and Stokes & McKiernan was empty. There were even reports that it was haunted.

Read also: University buying into history in the heart of Limerick city

Nearly half a century later, it has been purchased by UL as the location – finally – for a city-centre campus.

What if it had been chosen as a place of learning back in the momentous days of early 1970? Would the university have grown around it, expanding into Arthur’s Quay and perhaps down onto Patrick Street. Had that happened, we’d never have heard of the never-ending Opera project – to nobody’s regret. It’s not hard to imagine that Limerick would be a genuine living city now, far more vibrant than it is today — and with a restored Georgian core.

On the other hand, developing and expanding the university has been far easier in Plassey, without the kind of planning, building and space constraints that can delay projects for years.

All we can say for sure is that things would have been very different.

Later in 1970, the former Spillane’s site was snapped up by Ben Dunne Snr, who was expanding his supermarket empire across the land. Naturally, most Limerick people alive today associate the building with Dunnes Stores, even though the retailer has long since decamped to a more modern site nearby on Henry Street.

This May, Ben Dunne’s daughter, Margaret Heffernan, shook hands on an €8m deal for the Sarsfield Street property. Last Friday UL threw open the doors and allowed the public inside a site that will be the focus of intense local interest as the project develops.

Those of us who have long argued that UL should not exist in splendid Plassey isolation were of course cheered by the Dunnes purchase.

It cannot be right that there is absolutely no physical evidence in the city centre that Limerick is a university city – not even a token plaque at 71 O’Connell Street, where it all began. There, soon after starting his new job, the indefatigable Walsh plotted a course forward in an abandoned office, helped by his assistant, Anne Sadlier.

Fifty years ago, when the late Richard Harris and Hilda O’Malley addressed a packed rally on O’Connell Street and demanded a Limerick university, they couldn’t possibly have imagined the scale of the campus that is UL today.

“Limerick streets are red with the blood shed because of men like Cromwell and William of Orange, and a city which fought with such gallantry for freedom deserves a university,” Harris said that night — March 31, 1969.

The main reason the thousands who applauded him could never have envisaged the spectacular Plassey campus is because almost all of them would have expected their university to be built far closer to where they were standing – on O’Connell Street, yards from where the new campus will, we trust, eventually be built.

Seven years ago, when UL marked its 40th anniversary, I edited a supplement which celebrated the role of those who campaigned for a university in Limerick. I was one of those who benefited from their passion, finding it possible to study for a degree course in my home city, unlike the generations who came before me. Throughout my four years at Plassey, I never had an inkling of what it took to finally establish a university in Limerick, almost 150 years after the city lost out to Cork, Galway and Belfast in the 1840s.

How quickly they were forgotten, those formidable citizens who stood up for Limerick, taking to the streets with their banners time and again.

“Faceless men in Cork, Galway and Dublin working against Limerick”, one poster read. There were many others during the 1960s, including “Limerick is tired of promises” and “Stop the brain drain”.

Better late than never, the leadership team at UL would do well to remember the spirit behind that epic campaign. Some photographic evidence of those heady times should adorn the new facilities. That would serve to remind future UL students that Limerick had to fight long and hard for its university.