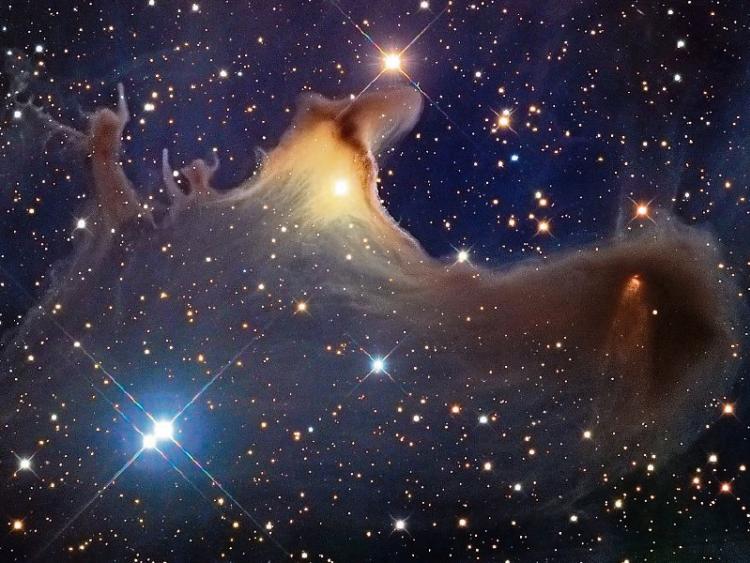 The Ghost Nebula is located in the Cepheus constellation

With easier access to high powered telescopes professional and amateur astronomers have found an overwhelming amount of near and far objects in our night sky. While some of these are pleasing others can evoke strong feelings of unease either by their look or their composition. These are just a few of those objects that you can look up next time you are out observing or for some of the further ones we will have to settle for pictures online.

The Helix Nebula (known in pop-culture by few different names such as the Eye of God and The Eye of Sauron) is located in the Aquarius constellation and was discovered by Karl Ludwig Harding. This is one of the closest to earth of all the bright planetary nebulae at a distance of approximately 650 light-years. Its location makes it a popular object for amateur astronomers and can be observed with binoculars as a hazy greenish cloud. This nebula formed at the end of the life of a star not dissimilar to our own Sun, when the star developed into a red giant and shed its outermost layers. The star’s outer gasses, ejected into space, are illuminated by the remaining core of the star. The shape of the nebula is what gives it the most interest and as you have probably guessed from its pop-culture name its looks like a giant eye looking down on us from space. If you have a chance to look up the infrared image, its look all the more unsettling.

ESO 593-IG (The Bird, Terminator Tinkerbell in pop-culture references) lies in the Sagittarius constellation and gives the image of a feathery bird floating in space. In fact, it’s much more terrifying then its beautiful shape and array of colours suggest. This object was created by the fusion of three galaxies, two of which were massive spiral galaxies while the third was a dwarf-galaxy. This is quite a large object with the distance between two points approximately 100,000 light years. This galaxy is separating at an extraordinary rate with its ‘head’ and various parts travelling at 400km per second.

The Ghost Nebula is located in the Cepheus constellation and is referred to as a globule that extends across from approximately 2 lightyears (so compared to the others it’s really small). It is the multifaceted process within the formation of a star that creates massive dust clouds and we love to find shapes within these dust clouds. This one in particular is easy to ascertain why it was given its name as it seems to depict a ghost-like creature chasing humans and that is quite a sight.