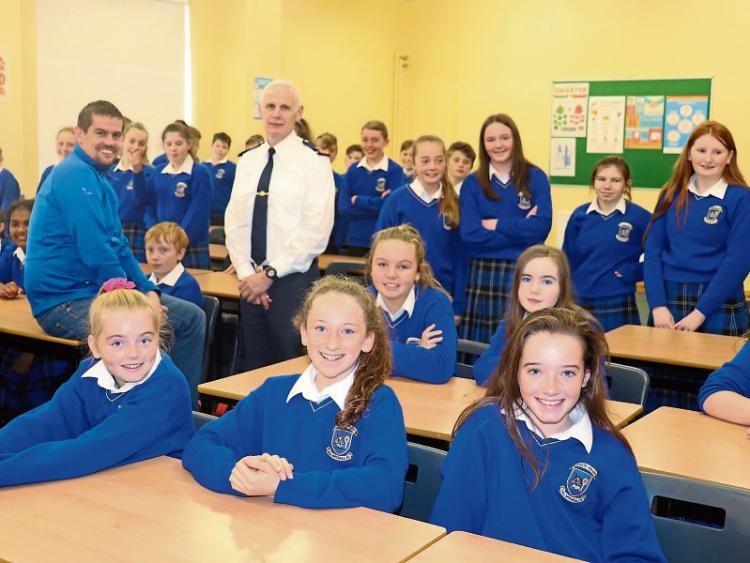 Following an invite from Coláiste Iósaef in Kilmallock, Supt Ryan was joined by local Sergeant Damien Holian; drugs squad detective Martin McCarthy and the council’s road safety officer Karen Butler. They came armed with 30 virtual headsets courtesy of the Aviva Driving School. They have been pre-loaded with an eight minute video which simulates a fatal road collision from the perspective of a front seat passenger.

Sgt Holian and Ms Butler focused on road safety. While Supt Ryan and Det Garda McCarthy gave a talk on drugs awareness. Between them they spoke directly to 134 students across transition, fifth and sixth years. The event was organised in conjunction with World Mental Health Day last Thursday.

Supt Ryan said: “Students are the future of the country. If we can go out and give advice and guide them in the right direction that is what we are all about.”

In their drugs talk, the Clare man said he and Detective Garda McCarthy advised the students in  relation to the dangers of drugs.

“We gave them real life experience of the consequences and results of drug use.  We are all conscious and aware of the drugs issue in Ireland, not just in Kilmallock. It is addressing that to educate and advise young people,” said Supt Ryan.

The superintendent was full of praise for the headsets.

“It was a virtual traffic accident. You are literally sitting in the car when the accident takes place. You have a three dimensional view of what it is like from the inside of the car. It really brings home the dangers of not wearing your seat belt, speeding and distraction driving. It was very much targeted at that group in school who will be driving in the next couple of years – some are already driving - and to raise awareness among them of the dangers out there on the road and the safety of all road users,” said Supt Ryan.

They spent four hours in the school and he said the students were very engaged and interested in the topics.

“The kids enjoyed it. it is all about breaking down the barriers between the gardai and young people. We want to get out there, meet them, talk to them and that’s what it is all about.

“I would be encouraging schools to get on to us. It is all part of our community engagement. We have people who are trained and are more than happy to go in to the schools and give talks,” said Supt Ryan, who is also organising a talk with the IFA in Cappamore on Wednesday, October 30, on rural isolation, wellness and crime prevention advice. See next week for more.

Principal of Coláiste Iósaef Noel Kelly said the students all agreed the talks were very informative and worthwhile.

“All students watched an eight minute virtual crash scene where a young driver was on his phone and crashed his car causing havoc to himself and his three passengers. The students were able to view (360 degrees) of the carnage caused by the accident.

“Students thought it was very realistic. They asked questions about driver safety and the importance of wearing a seatbelt.

“Sgt Holian gave an example of a crash scene that he was called to after the driver had lost his life and gave an account of how the passengers reacted after the incident. Students asked more questions about how to apply for a drivers license and how to be more safe on the road. Students agreed that less speed and more concentration is required by all young drivers and the inclination to show off whilst driving is not worth the risk,” said Mr Kelly.

Turning to the drugs awareness information from Supt Ryan and Det Garda McCarthy, Mr Kelly said his students were alarmed to hear the consequences of being caught with drugs and also the effect on their futures if they become drug users.

“Students asked plenty questions like, ‘What does it smell like, what are the consequences of getting a criminal conviction and what causes someone to become addicted?’ The gardai showed photographs of a grow house they had found and explained the effects on the lives of the people running the grow house.

“They also spoke about drug addiction and the choices young teenagers have to make. They advised all the students to say no to drugs and to think about their effect before they ever try them,” said Mr Kelly.

He continued, “It has opened their eyes to the consequences and the ‘life ending’ detrimental effect that drugs can have on their mental health such as anxiety and paranoia’.

Mr Kelly said he is very grateful to the teachers involved in organising the event  on World Mental Health Day.

“It reflects the broader curriculum and it shows the important link between schools and front line emergency services. I am also very thankful to our local county council members, Supt Ryan and his members of the force who gave of their time to come meet with our students,” concluded Mr Kelly.