Hunter on the loose and 'facing the beast' in Limerick 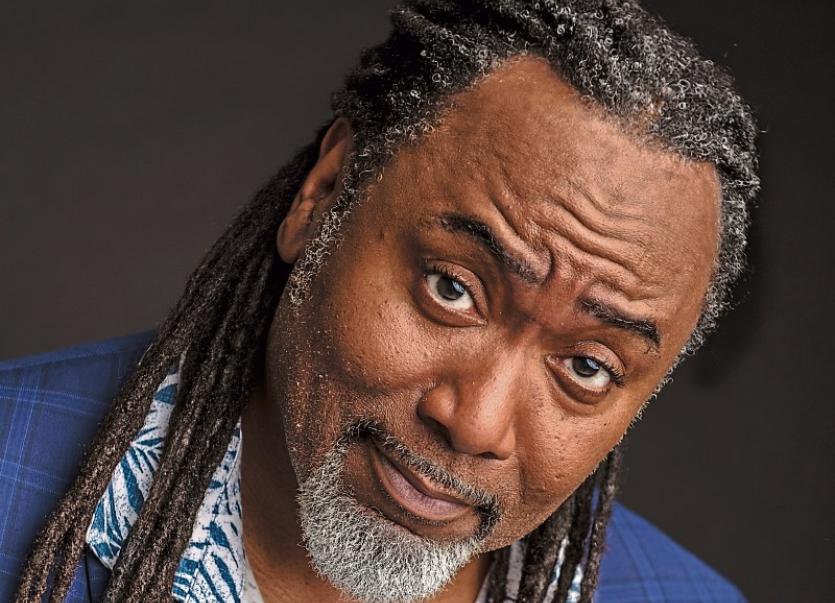 Reginald D Hunter: “I’ve never had to refine a show like this, because I’ve never been up against a complex moment like this..."

By the time he steps on stage in Limerick on Sunday week, Reg Hunter, along with 67.5m other UK residents, will be just four days away from the delivery of Boris Johnson's Brexit baby.

Sorry for that image, but the protracted gestation of this political monster is one of several strands in the stand-up’s latest show - Facing The Beast - that arrives in the Lime Tree Theatre, honed and refined after a long spell on the road.

“I will have fully shaped what I’ve been trying to say for the last three years by the time I get to Limerick,” Reg promises over the phone in his Deep South burr.

More of that later, but the Georgia-born comedian who has been living in Britain for over 20 years admits some big predictions have fallen flat and is wary of making any more when asked how his adopted home might reshape itself.

“First of all, in 2016 I said Trump would never be president, so I think my licence for making predictions should  be suspended for a while.

“As for Brexit, my English friends are saying to me ‘You got your escape route planned yet?’ We’re going to Belize!

“The truth of the matter is, no-one knows exactly what the fuck they’re talking about, so I don’t know exactly what England is going to be like until after October 31st and if it gets so retarded that America seems like a sane option, then I’ll go. If it don’t, and you can ride it out, then I won’t.”

He does offer however, that a lot of what has happened, he believes, is part of a globalised network of people, not just trying to be white supremacists, but trying to destroy politics altogether as we know it.

Hunter first went over to Britain to study acting having aced an audition in New York for the Royal Academy of Dramatic Art (RADA). It was meant to be for a year, now it’s into year 21.

“I was always an outsider and a stranger back home and it never made sense,” he says.

“At least being an outsider over here made sense.

“So, in a way being an outsider over here, and it making sense, made it feel more like home than actual home did.”

RADA was indeed a grand entree to Britain; Hunter had worked up his courage having been burned five years previously by a bad experience on the boards. He auditioned at UN Plaza in New York and out of 1,500 applicants they chose six, of which he was one.

“It was an arrow in the dark, man, I went and did it and, to my surprise, they said yes!

In those intervening years he had taught English and Drama to kids aged nine to 12 which he loved - if only it hadn’t been for the parents and the bureaucracy.

The turning point came in New York alright, though not from RADA.

“So I said I wanted to go to a comedy club, I’ve never been to one, I want to see what they do.

“So we went to the Comedy Store and I was purely going as a fan. There was 16 acts all doing like five minutes apiece and they were all so God-awful that by the time it was over I was thinking to myself - I can do as well as that.”

Not too many people can claim to have launched a successful career having been inspired by mediocrity, but there you go.

“You didn’t see how bad these folks was. This was, what 1996, something like that. This guy gets up and says, ‘Good evening folks, how you doing? Know what I hate? Faggots! Don’t you hate faggots? Two ass to ass faggots layin’ up against each other. I likes a woman! What about you?’ I remember his exact words,” he cackles.

“You have to look at in the context of the times, he continues, “People sat there and listened to that in 1996 in a way they wouldn’t in 2019.

“All you have to do is look at Eddie Murphy’s Raw and see what he says about ‘faggots’ and imagine what would happen if he said that now.”

Which leads us to another aspect of facing the beast. Aside from obvious hatred or bigotry, modern sensibilities are too heightened and hair trigger reactions are waiting to cascade over every comment.

“When I got into the business people were sensitive, but it is something else now. I tell people all the time you have to check yourself based on what you read and who you are around, because sometimes, if you’re feeling a rage towards something, that you’ve never felt before, or in the last five years or whatever, it’s possible your rage is manufactured, it is not your own.

“There is a good chance your rage is distilled through an algorithm in Silicon Valley and you either love Brexiteers or you hate them, but the extremity is what’s been manufactured.”

Hunter has of course been in some bruising online battles with critics and felt the tailwinds of the #MeToo tornado when a former girlfriend accused him of inappropriate behaviour - something he denied.

The experience of someone trying to use the issue to, as he says, end his career, does cause him to bristle.

The question is how do you deal with that as a professional comedian. Do you row back or double down? He responds with an analogy from Carlito’s Way about the dilemma you face about going too far north and being killed by one gang, or too far south and being killed by another. So what do you do if you want to go to Central Park and feed the ducks?

“You fucking go anyway, that’s how you handle them,” he says.

Though he refutes the suggestion that he likes to upset people.

“I really don’t. Enjoyment of upsetting people is an acquired taste. I had to find out about that because no matter how even and calm and well reasoned I thought my stuff was, people were going to get upset anyway, so I had to make my peace with that. I’ve had people get upset with me when I was just sitting there, saying nothing.

“This tour has been about facing the beast of our times, and it is ensconced in all of the stuff we’ve just been talking about, the Brexit madness and people’s fear about calling stuff out.

“This show has had three different incarnations. It started last year in Edinburgh and it was terrible for a number of interesting reasons, but I came back this year, it was different, better, but the core of it was much the same and now by the time it gets to Limerick I will have fully shaped exactly what I’ve been trying to say for the last three years.

“I’ve never had to refine a show like this, because I’ve never been up against a complex moment like this when so many people will get easily  upset, but feel like they have the right to end your career forever. So, I accept the challenge!”

Reginald D Hunter plays the Lime Tree Theatre on October 27. Tickets from 061 953400 or online at www.limetreetheatre.ie