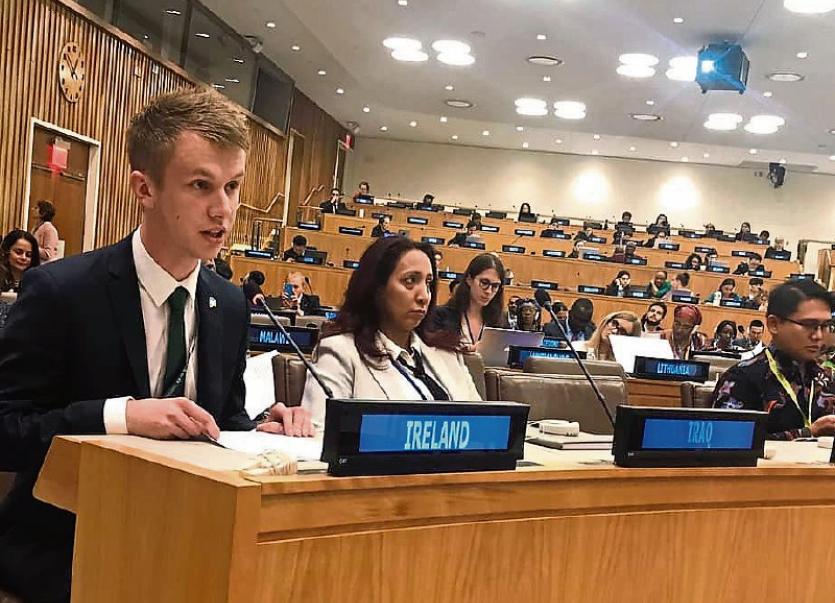 Jack O'Connor:  ‘I’ve been told by people that it would literally be career suicide for me to open up’

A YOUNG Limerick man is making waves across the Atlantic Ocean as he represents Ireland at an international conference, and has spoken honestly about his own battle with anxiety and suicidal thoughts.

Jack O’Connor, a 21-year-old entrepreneur who hails from Kilcolman made the impassioned speech on mental health at the United Nations Youth Delegate Programme in New York this week.

“Mental health issues have been present in my life since I was 16 years old,” revealed Jack, “it comes and goes, but social anxiety is my main issue. I can get so nervous in social settings, and in speaking up at events or in groups for fear of being wrong, or seeming stupid.

“I had to leave a conference yesterday and go to the hostel for the night, it got so bad,” he confessed. “The problem is, I hide it really well. Before today, only a small number of you here knew this about me.

“And I hide it because of the stigma around mental health,” he explained, “the fear that I’ll be excluded. That I’ll be judged. And it has reached the stage, on many, many occasions, that I have not only considered, but planned suicide.”

Jack provided listeners with stark and moving statistics surrounding suicide during his address.

“I have five minutes to speak here today, and in those five minutes, seven people will take their own lives across the world. This event is 75 minutes long, barely over an hour,” in this time, 105 people will kill themselves.

“That is the population of this conference room exactly three times over,” he continued, “about 30 of those 105 will be between the ages of 10 and 29 years old.”

Jack discussed how the main issue surrounding mental health is that it isn’t discussed enough, and how combating the stigma surrounding the issue is imperative.

“Once the words ‘depression’ and ‘suicide’ are mentioned, everybody else looks down and shuffles their feet,” he said, “people get uncomfortable when it is mentioned. And I can see some of you now. Right now, you are uncomfortable.

“I have been told by people that it would literally be ‘career suicide’ for me to open up about my mental health publicly,” he revealed, “and perhaps it is. But when there are people committing actual suicide because they can’t talk about it, then I don’t really care about committing career suicide.”

Jack emphasised the importance of simply reaching out to people in your life: “Ask them how their day is, how they are. It doesn’t have to be a huge display of support. It can be as simple as having a coffee and a chat.”

Jack encouraged attendees to approach him about their mental health struggles: “Chat with me, ask me questions. I’m in the position now where I can openly speak out about it.

“Talking is the only way to destigmatise and normalise mental health,” he concluded, “it can be an uncomfortable process. But please help the cause, you can literally save a person’s life.”