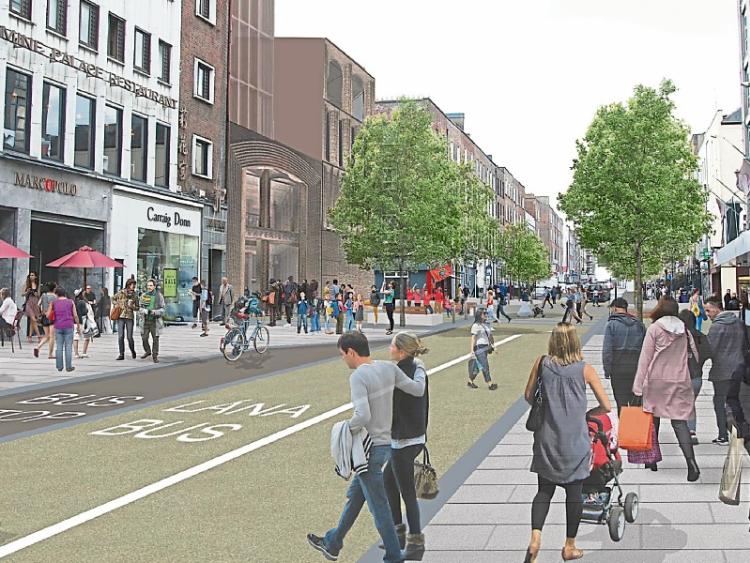 THERE has been a mixed reaction following the decision of councillors to approve multi-million euro plans for the revitalisation of O’Connell Street with one businessman dismissing it as having more holes than an Aero bar.

Following Monday’s decision by members of the Metropolitan District of Limerick, council officials have now begun work on the detailed design of the €9m project.

While the revitalisation will see the installation of wider footpaths and additional pedestrian areas between Denmark Street and Cecil Street critics say the concept is not transformative enough and lacks ambition.

All on-street parking and loading bays will be removed to facilitate the construction of a bus lane and a cycle lane.  A shared surface will also be a feature of the public realm.

While not included in the specific plan which was agreed on Monday, there are fears O’Connell Street may be designated as a bi-directional bus corridor in the Limerick Transport Strategy which is currently being drawn up by the National Transport Authority.

While concerns about the prospect of a bus lane through the city’s main thoroughfare was raised by several councillors during Monday’s meeting, council officials pointed out that no such proposal was before them.

Following a heated debate, the plans were approved by 15 votes to three with Cllr James Collins, Cllr Jerry O’’Dea and Cllr Abul Kalam Azad Talukder  each voting against.

An amendment, proposed by Cllr Sean Hartigan, to permanently pedestrianise O’Connell Street – between William Street and Cecil Street – was defeated by 11 votes to five – after director of service Kieran Lehane advised  such an amendment would represent a “material change” and could be open to challenge.

Following the vote Joe Delaney, acting director of service for capital investment, said work to finalise the detailed design will begin immediately and he expects contractors will be sought early next year.

Dee Ryan, CEO of Limerick Chamber has welcomed the outcome of the vote saying the focus must now be on delivering the project “as quickly as possible for business”.

However, businessman Tadhg Kearney, chair of the Limerick City Centre Business Forum, criticised the proposal which was put before councillors.

“The plans the elected members were presented with were vague on detail, with no detail of any design for street furniture, no definite pallet of materials and a traffic plan that had more holes in it than an Aero bar.”