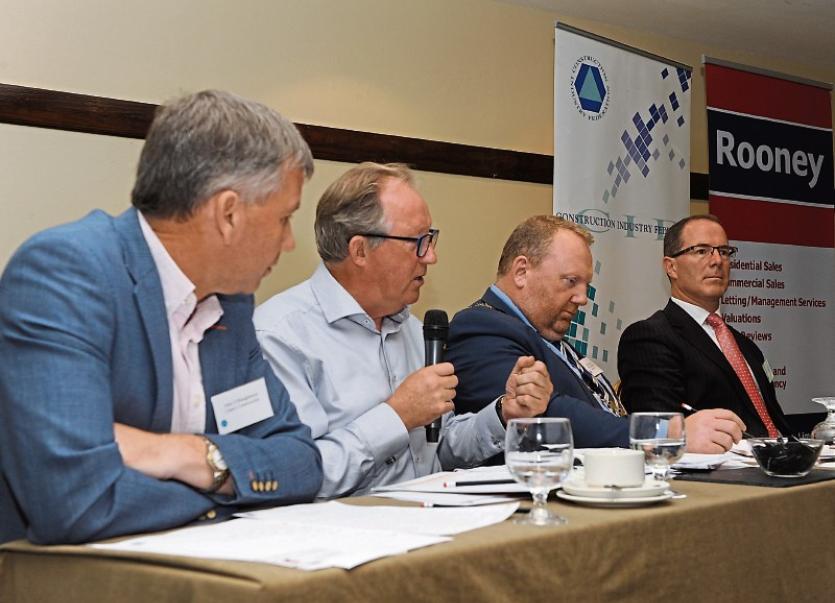 AS the property market slows down, people are no longer aggressively bidding against each other in driveways for homes, a local auctioneer has said.

Gordon Kearney, of Rooney’s Auctioneers said up to six months ago, it was common for up to 20 people turning up to a well-priced property in the Limerick suburbs, with an on-the-spot bidding war materialising.

“There was a small supply and people were bidding in the driveways. However, new home sales have slowed. Second hand home sales are ticking over. The queues of 10 to 20 people bidding in the driveway have stopped. You now might get three to five people turning up. You’ll still sell the house, but it wasn’t as frantic and panicked as it used to be.”

Mr Kearney was speaking at a special Construction Industry Federation (CIF) event at the Castletroy Park Hotel, which examined the state of the market in Limerick and around the country at the moment.

“We have seen the headlines showing 2% drops cross-country. House prices are falling for the first time in years, and we are feeling the same negative wind here in Limerick,” he said.

While house prices may have slowed down, rental prices continue to go in the opposite direction, with only state controls stopping bigger rises.

However, the auctioneer said landlords are fleeing the market – and he believes tax breaks should be offered for property owners who rent to people on the local authority housing list, or to students.

He said: “I know people give out about landlords and say they are greedy, money-hungry people. They are not. Most landlords have plans for retirement. They bought a second or third home. Most have a mortgage on it. The rental framework underpinning the sector has undergone so many changes over the past number of years, it’s frightening.”

Key to this is the fact over 50% of income a landlord makes is now taxable.

“We need to look at the tax treatment of landlords who rent to certain sectors in society. We know there is a huge social housing crisis. If landlords were encouraged to let out to social tenants, we could give them a reduction in tax rates. Or if you went into the student market, this could be worth exploring too. Then you’d open up a bigger supply chain in the rental market,” Mr Kearney said, acknowledging rental rates are at “crisis point”.

Meanwhile, a leading developer told the event that despite the governing calling for more high-rise homes to tackle the housing crisis, there is no market locally.

Responding to a question on this from Cllr James Collins, John O’Shaughnessy, Clancy Construction said: “People don’t want it. What people want – and I know it’s not what the government want to hear – is that people buying houses want to buy three-bed semi-Ds. If we as a developer go into a home with high-density, lots of terraced housing, and duplexes, they are hard to sell. People don’t want them. When people are spending money to the maximum of their salary, they are very cautious about what they buy.”

He also warned of a “stagnation” on the way, and urged developers and housebuyers to remain cautious.​

However, one thing which will stop the market from collapse, he feels, is the rules put in place by the Central Bank which stop someone borrowing more than three-and-a-half times their annual salary.​

But this has led to a disconnect between land prices and what properties can now be sold for.

Mr Kearney said the average age of a first-time homebuyer in Limerick has now risen to 34 years of age – a leap of 10 years from just a decade ago.

“The recession drove a lot of people abroad so we’ve lost a decade of people entering the market. So now they are in their 30s. Another reason for this is people are spending longer in third level education. Getting a degree was normally what you did before you went into the workplace. Now people are in third level well into their 30s,” he said.