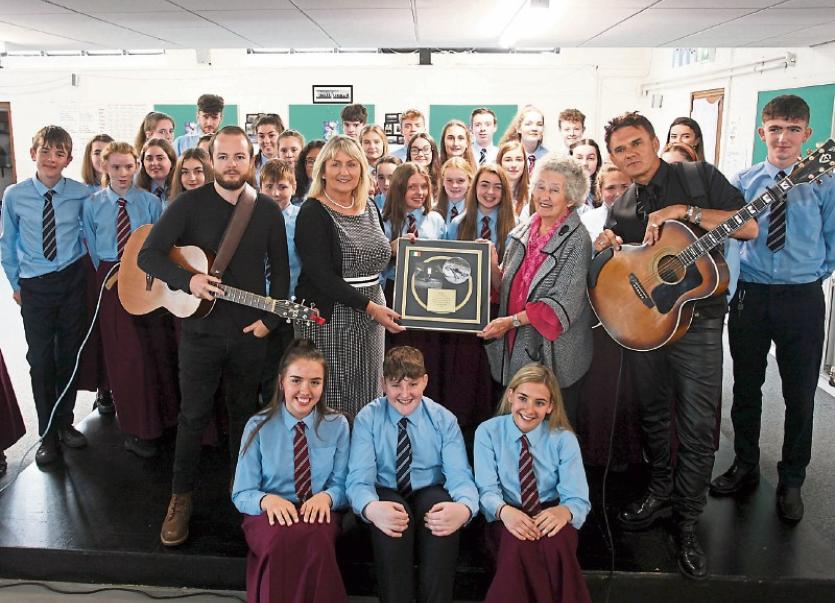 IT IS important to stay close to your roots” says Don Mescall as he sits in the principal’s office of his old school.

“It’s lovely to be back. A bit scary to be in the principal's office though. Not that I spent a lot of time here,” Don joked.

This is the second time the Limerick-born singer/ songwriter has visited St Marys Secondary School in Newport this year, returning previously to take part in the RTE show Nationwide.

This time Don was back on a more personal note, as he presented his Gold Record from his number one selling album Lighthouse Keeper to his former music teacher, Mary Ryan.

“It’s great to be back here again, especially with my old music teacher here, Mary, she was very helpful to me when I was here in the Convent in Newport as it was known then. She figured out pretty early on that I had no interest in the recorder, I just didn’t like the sound of it. So she said to me, there is a set of drums up in the storeroom. She said if you can put them together, maybe you can be the drummer in the school band.

“So it all started from there. It sparked an interest in playing musical instruments. I was a terrible drummer, I would like to point that out now but it is lovely to see her again, she is a great lady. Last year she came along to the show at the University Concert Hall, it was great to have her there.”

Returning to his old stomping ground prompted Don to reminisce about his school days, and how far he had come from being a first-year student learning to play the drums.

“Did I see myself sitting here now as a songwriter? No, not really. I am from a local family here, we live just down the road. I had eight sisters and two brothers. I am the second youngest. I think I’m still the only musician in the family, although a few of the younger generation have followed on.

“But no, I can’t say that I saw myself here now. But I did always have an interest in writing. I loved English class, I had a great teacher.”

However, Don is hoping to show students who might have a musical interest that it is possible to make a career from it.

“That is part of the reason I am back. What I am trying to do, in some way, is offer a little bit of inspiration to anyone.

“When you are at this age when you are in first year or second year, you have no idea what the world has planned for you. So it is nice to meet someone who went on the journey, and then you can see that they are normal enough.

“Everybody should follow their dreams and that’s what I did. I loved music and I still love music. I don’t ever wake up at any given day and not love music. It's always exciting, it’s another adventure.

“Every song is another adventure for me. Songwriting is more than just getting songs in the charts. It’s way more than that, that belittles it a little. Songwriting and music is good for the soul.

“So if I give that little bit of inspiration to someone else, who is just starting off, then I’m doing what I should be doing.”

The Gold Record winning album, Lighthouse Keeper, is Don’s first album in over a decade.

“I hadn’t made an album since 2006, because I didn’t particularly enjoy being the artist. I didn’t quite like being the frontman, but I liked songwriting and so I became a songwriter.

“Last year I was kicking around with the idea that I missed performing. So I was messing around in the studio, I’m blessed to have my own studio, and that’s where Lighthouse Keeper came from. Then when I brought the album out I wasn’t sure that anyone would remember that I was also a singer.

“But, surprisingly enough, it went to number one in Ireland.

“Since then I have been performing a lot. But predominantly, I am still a songwriter first.”

Joining Don on the album were a number of well-known faces, including Nathan Carter, Frances Black, Brian Kennedy, Paul Brady, Christy Dignam, Lisa McHugh among others.

“All I did was invite people I had written for in the past to come and join me. It was an amazing experience.

“It was just me, picking up the phone and asking them to sing on my album for a change. Bless them they all brought a little bit of themselves to the album, which is great,” he concluded.

Don will be showcasing his new album, along with other songs at his show An Evening with Don Mescall and Friends in UCH on Saturday, November 16, 2019.