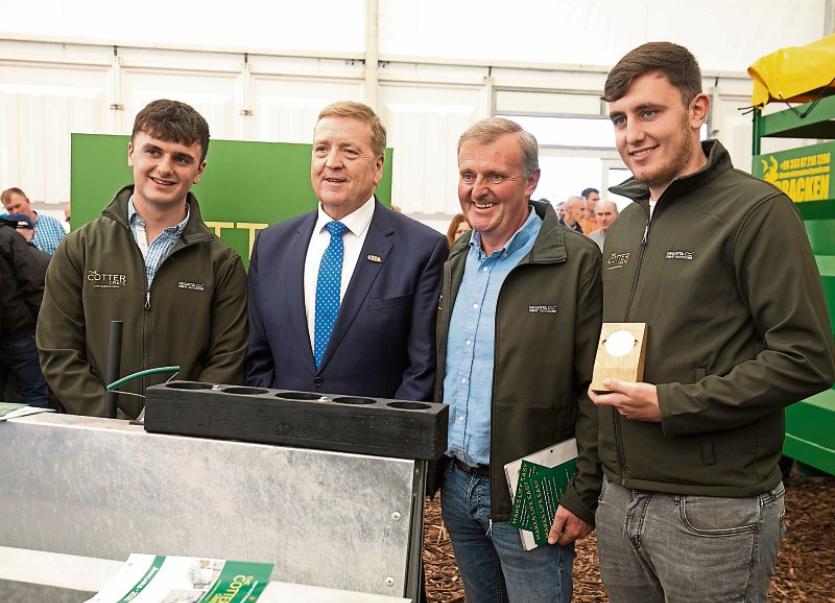 Nick and Jack Cotter and their dad Nick Snr, pictured with Minister Pat Breen at the ploughing championships

TWO Abbeyfeale brothers whose first enterprise began when they were still schoolboys have received national recognition from Enterprise Ireland.

Nick and Jack Cotter, from Dromtrasna North, Abbeyfeale were presented with the Alfred Cox Founder’s Perpetual Trophy for overall best start-up at the Enterprise Ireland Innovation Arena Awards at the National Ploughing Championships in Carlow.

The award carries with it a cheque for €5,000 and €5,000 worth of mentoring with Enterprise Ireland and it was awarded for their very unique lamb handling crate, the Cotter Cradle,  which also won the Best Start Up Agric-Engineering Award.

The Cotter Cradle, Nick Cotter explained this week, was inspired by another of the brothers’ enterprises, their organic lamb farm outside Abbeyfeale.

The Cotter  farm which was originally a dairy farm but converted to beef in the mid 1990s and then to sheep in the mid 2000s.

“The problem was there was a huge amount of labour involved,” Nick continued. Vaccinating or worming 400 lambs was often a five-man operation which could take a full day to complete. It was also difficult and tiring.

“We needed to restrain the lamb but in a position that was comfortable.”

But the resourceful brothers came up with a solution: a ramp leading to a platform where the lamb is held by its own weight without any restraint but at a height that is comfortable for the farmer.

The original cradle, he acknowledged, was not very sophisticated and was made out of wood and rope.

“It was a bit awkward but it worked,” Nick said.  But at the start of this year, the brothers realised that other farmers were very taken with their concept and also realised it might be useful to other people.

So they worked on the design, refining it, developing a metal prototype and the Cotter Cradle was born. “We have a patent pending,” Nick said, adding they hope to have it on the market next year.

Already, potential sales have been identified in Ireland but after that, the world and its sheep beckons.

“You need to go where the sheep are. It will be starting off in Ireland but afterwards Wales, New Zealand and Australia.”

But innovation and enterprise are in the brothers’ DNA. When Jack was just 13 and Nick was only 11, they set up their first business, Cotter Brothers Firewood, providing high-quality dry firewood which helped win a  Quercus Innovation/Entrepreneurship Scholarship from UCC for Nick who is now studying Business and Law.

Jack, who graduated from LIT in engineering, is also continuing his studies.

Meanwhile, the innovative Adare company, Samco, which has won several accolades, also picked up an Enterprise Award, the  Agri-Engineering, Established Company, award. The award was presented to Robert Shine. The company’s  newest product, the Silage Wheel Loader Extensions, are easily fitted to the front rims of several different makes and models of loader, to hydraulically extend the width of the vehicle’ s front tyres.