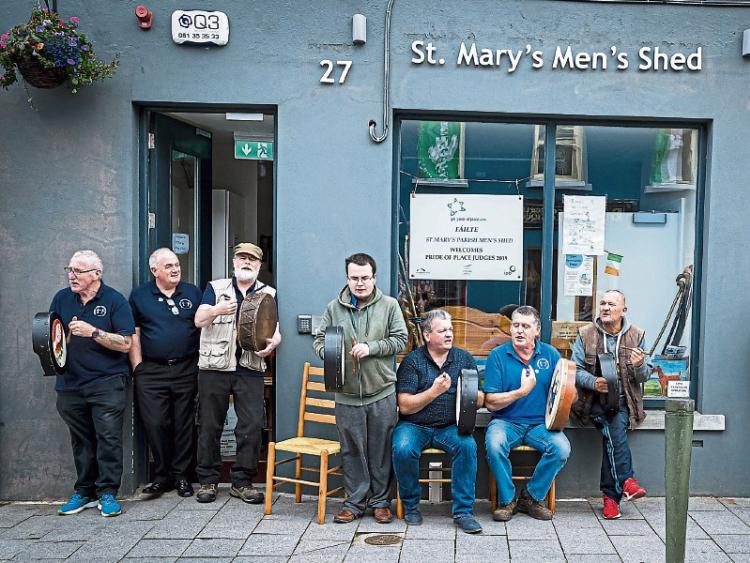 TO THE members of St Mary's Parish Men’s Shed, being nominated for Pride of Place award has been ‘a real boost to their sense of pride.

“It really does feel good. It tells you that we must be doing something right,” said the men’s shed co-ordinator Seamus Scott.

“We are all very chuffed to get nominated. It has tied a lot of the group together. Some of the lads, who might not have been that interested before, it really gave them a boost,” he added.

The Men’s Shed group has been selected by Limerick City and County Council as this year’s entry for Limerick in the Community Wellbeing Initiative category.

The group joins three other Limerick finalists who have selected to compete this year, including, Abbeyfeale Community Council, Newtown Cottage Association in Clarina, and St Michael's Day Care Centre in Cappamore.

Abbeyfeale comes out in force to demonstrate pride in its community

Clarina's hedge school a haven of warmth and welcome

Judging took place earlier this month, with judges coming down to see what exactly goes on in  St Mary's Parish Men’s Shed.

“We gave them a presentation, a tour of the facilities, a powerpoint presentation and questions and answers session. I think that it all went very smoothly,” said Mr Scott.

There is really a great bunch of lads here. They do a lot of community projects such as giving wood to the elderly and painting up the local handball alley.

Founded in 2012, in the historic King’s Island area of Limerick, St. Mary’s Parish Men’s Shed is thriving, with thirty plus members.

In 2012, the Community Development Project provided the group with a meeting room in their building in Verdant Place.

With the support of the Local Community Office and Limerick City and County Council, a new premises was provided in Nicholas Street.

Members of The Shed learn new skills such as carpentry, gardening, painting, beekeeping and playing musical instruments, as well as participating in local events and festivals.

The Shed has collaborated with various associations in Limerick such as Headway and Jigsaw, other Men’s Shed locally and nationally.

Congratulating the four groups on their selection Mayor of the City and County of Limerick Cllr Michael Sheahan said: “Right across Limerick, great work is being done by communities every day. These awards shine a spotlight on the people who are doing brilliant work in their communities.”

Pádraig Malone, Urban and Rural Community Development, Limerick City and County Council said: “Taking part in the IPB Pride of Place competition is a distinctive opportunity for community groups to be officially recognised on an all-island basis for the work being done every day by communities in Limerick.”