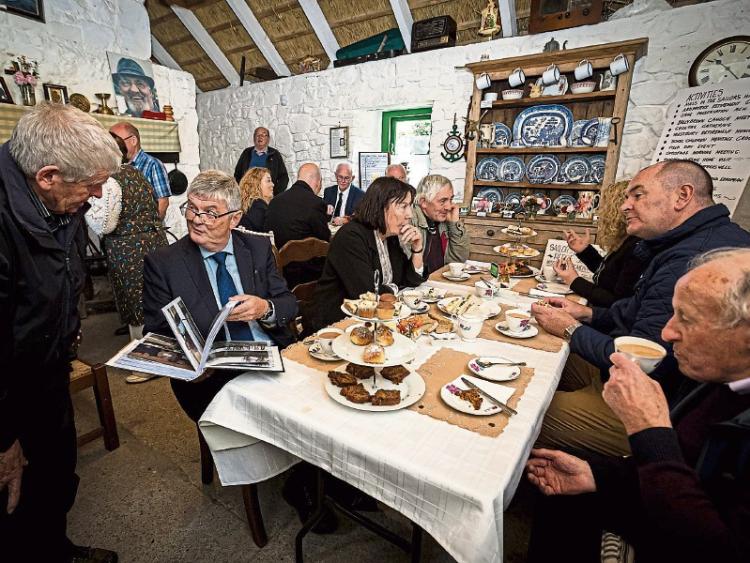 ON a wild, windy Wednesday, with the Shannon just a glimpse and a half away,  the Hedge School Cottage in Newtown, Clarina was a haven of warmth and welcome.

The fire burned high in the big, open hearth; the table was laid for tea and the dresser was filled with shining delf.

We all tumbled in to the cottage which stands as a memorial to community, having been rebuilt from the ground up through voluntary labour, by men who were for the most part retired.  And, said fear a’ tí for the day, Jim O’ Farrell, no money was spent on materials. If a bag of cement or a trailer load of sand was needed, it turned up.

The story began, Jim explained, in 2015, with the Sailor’s Haggard, a triangle of land across the road from the cottage that has been transformed into a memorial to the past generations of fishermen who worked the tidal waters of the Shannon river.

The site was gifted to the parish by Peter Byrnes, the last of eight generations of Shannon fishermen whose livelihood came to an end through EU regulations in 2006. But the symbols of their work remain in the Sailor’s Haggard.

But buoyed up by their success, the members of the Newtown Cottage Association Ltd then moved on to an even bigger project, to turn a tumbledown, overgrown  house into the beating heart of the local area.

The house, Jim told the gathering which included the judges of the Pride of Place awards, was built about 1750 and became a hedge school in the early 1800s. Records from 1826 tell of one schoolmaster, a Mr O’Shea, who had some 45 pupils.

But  the job of transforming the cottage, donated by Dr Matthew Potter and his brother in the name of their uncle, was immense.

Trees had to be cut out, the remaining walls taken down and new footings put in and the house rebuilt stone by stone before being  thatched with reeds taken from the river.

And all the work was done on a voluntary basis, with 90-year-old Peter Byrnes as the clerk of works

“It was a real meitheal,” Jim said, paying tribute to the powering drive of the late Liam Coughlan and the late Jim Guerin.

The two-roomed, white-washed cottage now contains an old-style country kitchen while the second room houses a collection of artefacts reflecting life and work in the area.

Outside, there is a boatshed with a boat built by Peter Byrnes, a dancing square and seating to take the sun or watch the world go by. In the garden also is a time-capsule buried for 50 years by pupils from the nearby Ballybrown national school.

The cottage has, in a very short space of time,  become a  hub for meetings and for social gatherings and is a big attraction for visitors. These include singers Louise Morrissey and Mary Byrnes, active retired groups, school groups and residents from the nearby nursing home. For older visitors, in particular, the cottage, with its open fire and bastible oven, is very evocative, Jim said.

“We are not interested in busloads of tourists,” he explained for the benefit of the judges. “We are interested in the discerning tourist.”

Afternoon teas at the cottage have proven to be very successful, Theresa O’Leary  explained and people come from far and near, for the tea, the fire and the chat.

They also come to see Maura Byrnes baking bread. “You can see I don’t measure anything,” Maura declared cheerfully as she demonstrated what she had learned from her grandmother 60 years ago. Forty minutes in a bastible oven on the open fire and the round cake of bread was baked to perfection.

“You have every right to celebrate what you have achieved,” Pride of Place judge Declan Nelson said while his fellow judge Tim Caffrey described it as a very unique project, “very simple and very wonderful”.

Then it was time for tea.

The Hedge School Cottage and Sailor’s Haggard are entered in the Community Tourism Initiative.