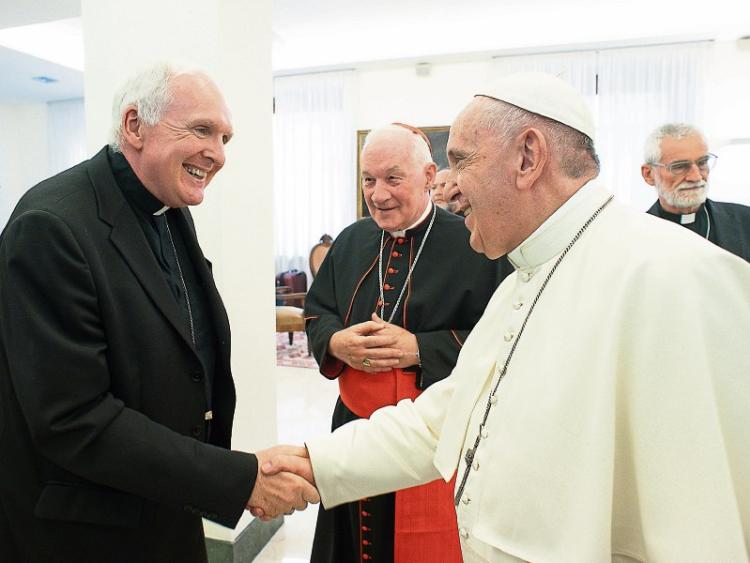 POPE Francis has declared his interest in Limerick once again during what Bishop Brendan Leahy said was one of the most privileged moments of his life – lunch with the Pontiff last week.

The Bishop of Limerick ended up having lunch at the same table as Pope Francis in The Vatican at the end of a two-week course for bishops. And, Bishop Leahy says, Pope Francis again took time to ask about Limerick.

“We were all introduced to him earlier on his arrival but I was taken aback when, as he was presenting me with my rosary beads on the way out, he stopped me to ask about Limerick. He was very deliberate on his part and he had a warmth in his eye when he asked. He clearly has a special fondness for Limerick.”

Explaining how he ended up having lunch at the same table as Pope Francis, Bishop Leahy explained that being first is not always everything. “I actually was the last into the room and I took a seat at a table that had one vacant. No one sat at Pope Francis’ table as we assumed all those seats were allotted but they weren’t, in fact. So, when Pope Francis arrived into the room, a number of us were randomly asked to move to his table and I was one of the lucky ones.

“Just six of us ended up at the table with him and it was one of the great privileges of my life. What struck me most was just how calm and at peace he is.  When you think of CEOs and political leaders with huge responsibilities and workloads, it always seems to tell on them. But with Pope Francis there’s a constant calm around him.

“I’ve met him now on three occasions and he’s asked about Limerick every time.  He’s very familiar with the city clearly but I, unfortunately, didn’t take the chance to ask him about this last week. There are suggestions that he was here for a period as a young Jesuit but I’ll definitely make it my business if I have the opportunity to meet him again to ask him.”

As for the lunch table conversation, he said:  “It was really about issues across the world. It was a free-flowing conversation. I did ask him if he had managed to have a break and he explained that he did but that to unwind, he doesn’t go anywhere, just stays where he is, reads, listens to music and rests. It was a real privilege, perhaps the greatest privilege of my life to have lunch with him.  He is a truly special man and it comes across even in casual situations like that.”

Read also: ‘Every day is a blessing’: Limerick mum of baby boy who died fights for her life