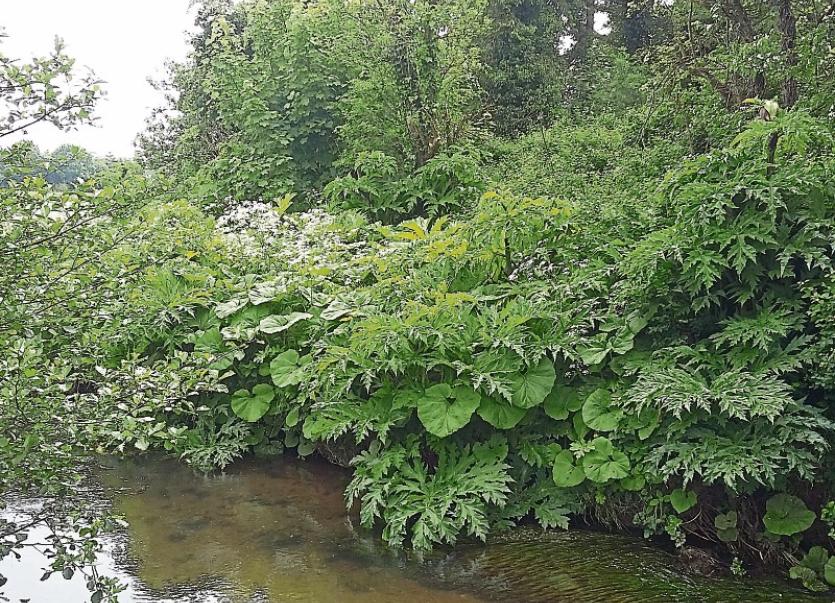 Giant hogweed in Kilfinane. Find out how you can help halt its advance

A pernicious invasive alien that causes a nasty skin burn is spreading its tentacles in county Limerick and the authorities are calling on the public to help them eradicate it.

It might sound like a line from HG Wells’ War of the Worlds as broadcast famously by Orson Welles, but there is an alien invader threatening native species and its name is giant hogweed.

The invasive plant is threatening biodviersity and Limerick City and County Council is fighting back in one corner of Limerick with an initiative to help restore native plants.

The Council recently secured funding from the Department of Culture, Heritage and the Gaeltacht under the National Biodiversity Action Plan to eradicate giant hogweed from the River Loobagh and restore and enhance the native biodiversity in the Loobagh catchment.

To hear about the project and how you can help a public meeting is taking place in the Deebert House Hotel, Kilmallock on Wednesday 18 September at 7:30pm, where you will learn more about the work the Council is doing and how you can get involved.

The project is being carried out in partnership with Ballyhoura Development and the Maigue Rivers Trust with the services of ecologist Dr Frances Giaguinto and invasive species contractor Nick Head.

The River Loobagh is significant from a conservation perspective because it is a tributary of the River Maigue, which in turn, flows into the River Shannon, an area of outstanding beauty and of European conservation importance.

Traditionally, invasive alien plant eradication involves the repeated use of herbicide. Limerick City and County Council is doing things differently with this project.

Herbicide is not being used except where absolutely necessary and a citizen science approach to biodiversity restoration has been adopted to go hand in hand with the eradication work.

So, if you are a local resident in the area, a landowner, a professional involved in ecology, a Tidy Towns representative interested in biodiversity action planning, a local community group involved with river-based activities, or indeed any interested party, the Council is inviting you along.

There will be plenty of time for questions and discussion over a cup of tea after the talk, they add.