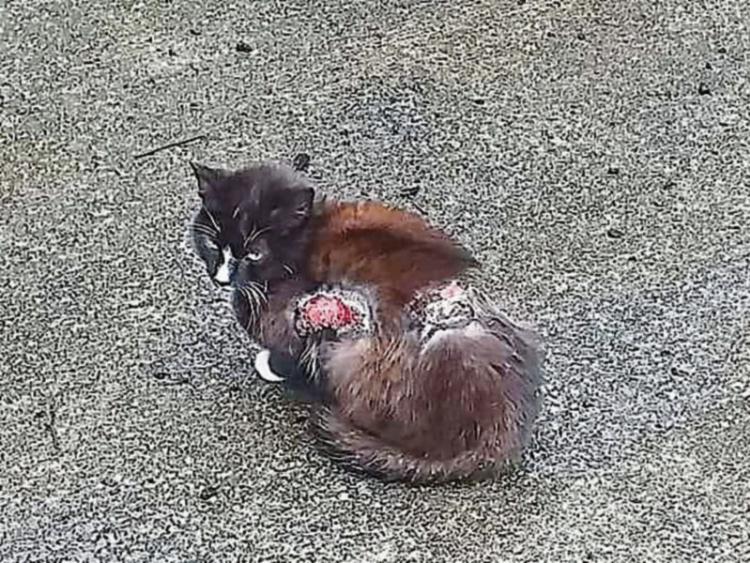 THOUSANDS of euro have been donated over the past week to pay for the medical expenses of a badly scalded cat rescued by the Deel Animal Action Group near Newcastle West.

And there was an enormous response on social media as well as widespread traditional media coverage when the disturbing story and graphic  pictures of the cat, were posted on Facebook by the animal welfare group.

“I feel sick,” one woman said after reading the post.

“That is barbaric. I hope to god the culprit(s) are caught and no other innocent animal is harmed,” wrote another.

The Deel Animal Action Group went public after a woman sent them photos of three cats that had been coming into her yard and eating her family cat’s food. “The finder was concerned about them as they had what appeared to be burn marks on them,” the group stated. A volunteer went to the house but only succeeded in capturing one of the cats.  Since then, however, a second cat has been rescued and treated.

Posting a photo of one of the injured cats the group advised : “Warning. Graphic  Content. Please share public. The unthinkable has happened!!!.”

The rescued cat was brought to the vet who confirmed the cat had been burnt by scalding hot water. We have more pictures but they are just too graphic to post,” the group added. “All three cats are in a similar state. To say we are outraged and disgusted that people can do this to any animal is an understatement.

“We are aware of who may be responsible for this despicable, inhumane, and downright cowardly act of abuse of these poor babies and will be reporting it to the ISPCA as well as the gardai,” the post continued. “We hope you are ashamed of yourselves!

“The vet has advised us that the treatment for all three of these cats will consist of minimum four days in the vets having treated dressings changed daily under sedation and pain relief. Then into a foster home until they are pain free and back to reasonable health.” They are still hoping to rescue the third cat.  To date, the appeal  has raised €2,470.