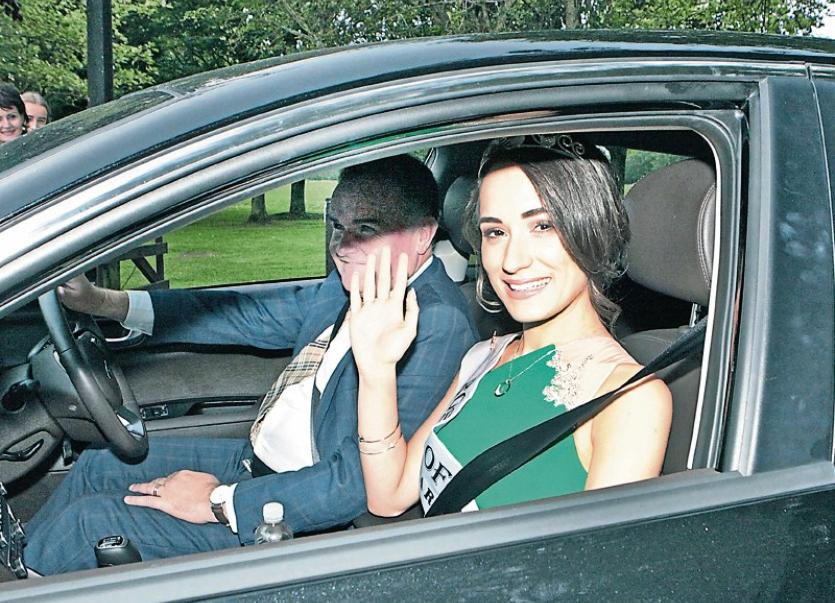 Rose of Tralee Sinead Flanagan arriving to a homecoming reception in the Woodlands PICTURE: Dave Gaynor

SINÉAD Flanagan, the International Rose of Tralee, says she’s still getting used to her new title after winning the competition a week ago.

The junior doctor, from Adare, will have her first engagement as the Rose of Tralee at the agri-extravaganza that is the Ploughing Championships in Co. Carlow, which begin on September 17.

Before that however, she enjoyed a wonderful welcome home to Adare and told the Leader she is still coming to terms with all the attention.

“It’s been fantastic. I am still getting used to being called the Rose of Tralee, but I am getting there. I’m just taking it all step by step at the moment. It’s still very fresh for me. I am not used to all the media attention. It’s still very early days,” said Sinéad.

“The highlight so far was the homecoming reception in the Woodlands Hotel in my home town of Adare. My family and friends were there, as well as the Deputy Mayor. The Mayor made an appearance later in the evening. A few of the other roses and escorts also came so it was a great reception.

“The Woodlands have been neighbours of mine growing up, so it was really great to have it there,” she added.

Sinéad was welcomed to the hotel by a corridor of fire along the driveway of the Woodlands House Hotel - where she worked for a time when she was younger.

Having turned 28 years old last Thursday her homecoming to Adare, where she has lived since she was a teenager was doubly special.

“My birthday happened to coincide with the homecoming reception, so I haven’t really had a chance to have any official birthday celebrations as of yet,” said Sinéad.

“There have been so many celebrations lately, I think I might postpone it for a while. Still, it has been a birthday I will never forget,” she added.

The Ploughing Championships are the next official event in the Limerick Rose’s diary, with the junior doctor taking it ‘day by day’.

The changes in the competition, according to organisers, would see half of the regions showcasing a Rose each year, and have been made to “ensure that every Rose enjoys the ultimate positive experience”. Roses representing Kerry, Cork, and Dublin will continue to be selected every year.

“At this moment there is no Limerick Rose for 2020. Whether that might change now that I have won, I don’t know, but for now, there will be no Limerick Rose in the competition until 2021,” said Sinéad.

“If any girl out there is thinking of going for the one in 2020, I cannot recommend it enough. Even before I was crowned, it was a fantastic experience. Even just taking part in the county level events is amazing,” she added.

Read also, the most entertaining events guide on Shannonside: Things what are on in Limerick