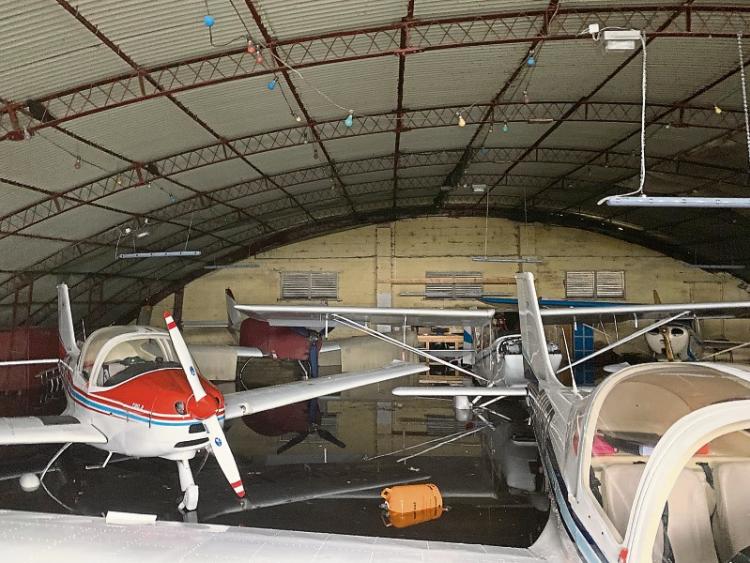 The flooded hangar at Coonagh Airfield

HIGH-flying students will not be allowed to charter a flight at Coonagh Airfield for up to a month as a result of last weekend’s severe flooding, resulting in a huge loss of revenue for Limerick Flying Club.

While there is no estimated cost of damage, there was a foot of flooding in the two hangars, covering the wheels and undercarriages of some of the planes, damaged building parts, and destroyed files.

The club’s chairperson, Mark Burkley told the Limerick Leader that all 10 club and private planes will have to be engineer-inspected over the coming weeks before they can be returned to the field.

And because this process can take a number of weeks, the club has issued a month-long closure notice to the Irish Aviation Authority, which can be cancelled at any stage.

“I don’t think it’s been huge damage. It’s mostly wheels, it didn’t go high enough to get into the engines or anything like that. But we will have to get an engineer to check all the aircraft. There’s a bit of expense there,” Mr Burkley said.

The Office of Public Works, which has admitted fault over the flooding, has offered to pump out the water from the airfield, including the runway, most of which is under a foot of water.

“I went out there, with my wellies on, and it almost went out to the top of my wellies as I was going into the hangar. In both hangars, there was about a foot of water.”

There are 10 planes in the Coonagh hangars; seven private aircraft and three club-owned, which are used for flying lessons.

However, no lessons will be taking place at the airfield for a number of weeks, Mr Burkley said. In fact, they had to cancel their “fully-booked” weekend, which is around 30 lessons.

“There is definitely a loss of revenue, and we don’t know when we will be back. The aircraft have to be inspected, we have to be very, very careful with the technical conditions. As to when we can get an engineer up and sign them all off again and return them to service, it could be a week or two before that happens.”

He added: “We have given the closure notice to the IAA. We have given them a one-month closure, but we can cancel that at any time, as soon as we have the field operational again.”

There are 100 members of the flying, many of whom are student pilots, with the youngest member aged 15.

Among the aircraft that have to be inspected is a newly-acquired plane which was brought into the hangar due to the increasing demand for pilot training.