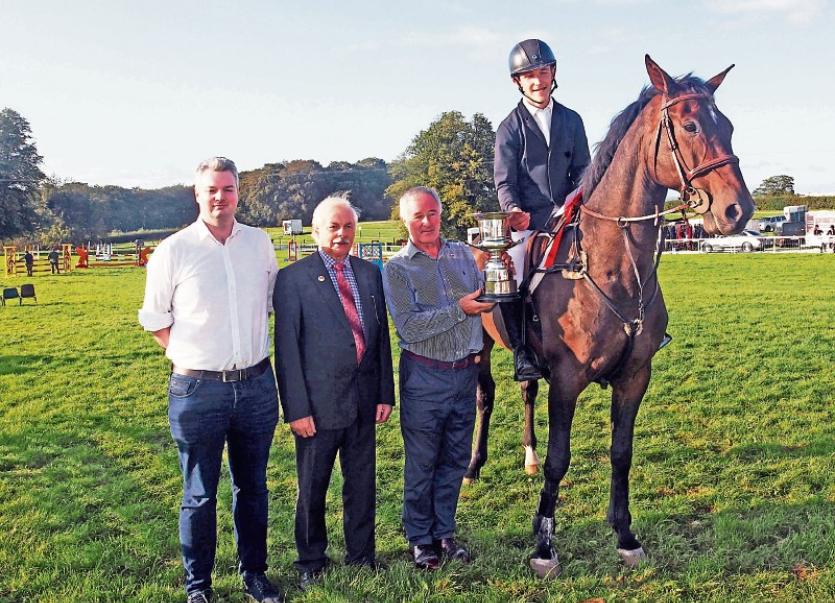 Dan Geaney receives the Leader Cup from Bill Hanly, with the Leader's own Donal O'Regan and Show president Leo Walsh looking on

THE LIMERICK Leader was formerly owned by the Buckley family from County Kerry and the Leader Cup is returning to the Kingdom.

It was presented to Dan Geaney, from Castleisland, after the Hanly Donnellan Grand Prix at Limerick Show on Sunday. The delighted 17-year old won after a jump-off that included Richard Hourigan from Lisnagry. Both men had clear rounds but Dan was just a couple of seconds faster. The Limerick Leader Cup has been presented every year since 1946 and Mr Geaney will be a new name inscribed on it.

Bill Hanly, auctioneer, said he was very proud to be sponsoring the leading showjumping competition at Limerick Show for the second year in a row.

“There is a huge entry for it – over 20 – and the standard is second to none. Former Irish Chef d'Equipe Robert Splaine is riding,” said Mr Hanly, who has been involved with Limerick Show since he was 14 – over 40 years ago.

It is Mr Hanly’s second year as chairman of the showjumping committee.

“The main reason I am involved is because it is so pleasing to see all these children and younger people competing when there are so many other aciivities that they could go to. It is great for their confidence and it teaches them to mind animals and look after them,” said Mr Hanly.

In 2018, they had to water the ground because it was so dry but there was no need for that this year.

“It is perfect jumping ground. There has been a huge entry in the showjumping. We started at 10am. It is 6pm now and we still have two competitions to go - that is a lot of people. I’ve never seen the like of it in any year,” said Mr Hanly.