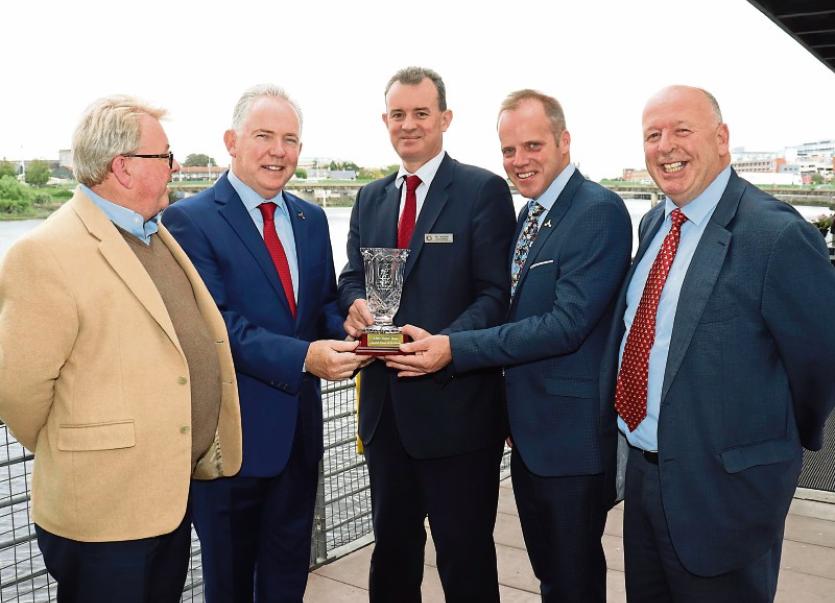 THE Team at Adare Manor who secured The Ryder Cup for 2026, which is estimated to be worth up to €161m for the Irish economy, have been named the Limerick Persons of the Month.

Colm Hannon, CEO of Adare Manor accepted the award along with the manor’s golf course superintendent Alan MacDonnell on behalf of the entire team at the five-star resort who worked on securing the prestigious biennial golf competition between Europe and the United States.

“We are all over the moon about it. It’s been a work in progress for the last couple of years and we are delighted that it has all come to fruition. It’s great for Adare Manor, the region and Ireland. We are all delighted,” said Mr Hannon who revealed that since the purchase and subsequent refurbishment of the five-star hotel, The Ryder Cup had been firmly in the sights of the Adare Manor team.

The resort was bought by businessman JP McManus, his wife Noreen and family in late 2014 and underwent a massive redevelopment over 18 months in 2016 and 2017.

Mr McManus is “delighted” with the securing of the tournament.

“He is a huge golf fan and it was a dream of his to bring The Ryder Cup to Limerick and Ireland,” said Mr Hannon.

With seven years before the first player tees off in The Ryder Cup on Limerick soil, the 104 bedrooms at Adare Manor have already been block booked.

“It is block booked at the moment by The Ryder Cup so all of the teams will stay in Adare Manor - the teams and their partners and their teams. Each player comes with their own team now - the caddie and their manager, their wife or partner. So Adare Manor is booked. They estimate that within an hour to an hour and 40 minutes of Adare will be completely full.”

While no exact dates have been released for the tournament there has been a lot of interest according to Mr Hannon, in terms of people enquiring about accommodation for 2026.

Sources say that the potential for tourism and international marketing far outweighs any financial investment the taxpayer will make.

“They were saying in terms of revenue from Paris (which hosted the competition in 2018) that the economic impact was somewhere close to 250 million during the week of the event,” Mr Hannon explained. “Our priority now, and indeed The European Tour, is to make the best of it, and Ireland Inc, between now and 2026, and to leave a legacy thereafter. It’s hard to put a full monetary value on what a Ryder Cup coming to a destination is worth.

“We’ve had calls and I know other hoteliers in the region have already had calls asking about it but The European Tour hasn't announced the specific dates yet so until such time as that happens I think it will be a softly, softly enquiry rather than a hard booking,” continued Mr Hannon.

Officials from The Ryder Cup first visited Adare Manor back in 2015 and carried out “a detailed inspection” of the course.

“That’s the old course,” Mr Hannon pointed out. “We knew they were coming and they said to us, lovely course and everything else but then they gave us a list of things saying if you want to get this course tournament ready this is where you’ll have challenges and  this is what you need to do.”

When Adare Manor began its spectacular redevelopment project in 2016-2017, renowned American golf course architect Tom Fazio was invited to take on a comprehensive redesign. The redevelopment brought the golf course to a new level.

According to Alan MacDonnell, the golf course superintendent, the conditioning of the course is key to its popularity and success.

“All of the grass is cut at one inch and less, so that does make the game of golf extremely enjoyable,” he pointed out.

Next July of course will see the sixth staging of the JP McManus Pro-Am at the course. Spectators can anticipate the return of international golfing superstars and well-known faces from the entertainment world.

“There is a fantastic field,” said Mr Hannon, “the equivalent of any major that would be playing here and Alan and his team on the golf course will be setting the course up, all singing, all dancing, to have it as good as it could ever be so that the pros who will be playing on it, many of whom will be playing hopefully in 2026, will get a first chance to experience it on a competitive level.”

And Mr MacDonnell didn’t rule out the prospect of securing an Irish Open at the Manor between now and The Ryder Cup.

“Well I suppose we can’t say what’s going to exactly happen in the future, whether there has to be dry runs or not I’m not entirely certain.”

When asked whether the lack of rough on the course posed enough of a challenge for the top golfers in the world, Mr MacDonnell said: “I think the challenge in Adare is the green complexes.

“A total of 14 of our 18 greens are elevated. Accuracy is at a premium. As it stands, we do not have any rough, whether we have to grow it up a little bit to cater for a Ryder Cup is yet to be determined.

“We know ourselves that European captains are going to have an influence and a say on that but with regard to routing and changes on the course, no, different types of cut, maybe, but that would be it.”

When redeveloping the course, the one thing that was at the forefront of the team’s mind was ensuring that it was a course that every golfer could enjoy.

“The beauty of this new golf course is it actually works for everyone and we see people here going out that are 18,19, 20, up to mid 20 handicap and they have a wonderful time.

“We said the ultimate test for us is that when you finish that 18th hole that you say ‘I can’t wait to come back and play that again’,” said Mr Hannon.

So it’s all systems go to ensure that everything is in tip-top condition at Adare Manor when the first golfer tees off in The Ryder Cup 2026.

“Everybody wants to be there for the first match at eight o’clock. You have 45,000 people to get in the gate, get parked up, and to get to the first tee before the first match tees off,” Mr MacDonnell pointed out.

“Hopefully, touch wood, it will all go to plan. I think the roar of the crowd will be a hair standing on the back of your neck moment for me and the whole team in Adare.”