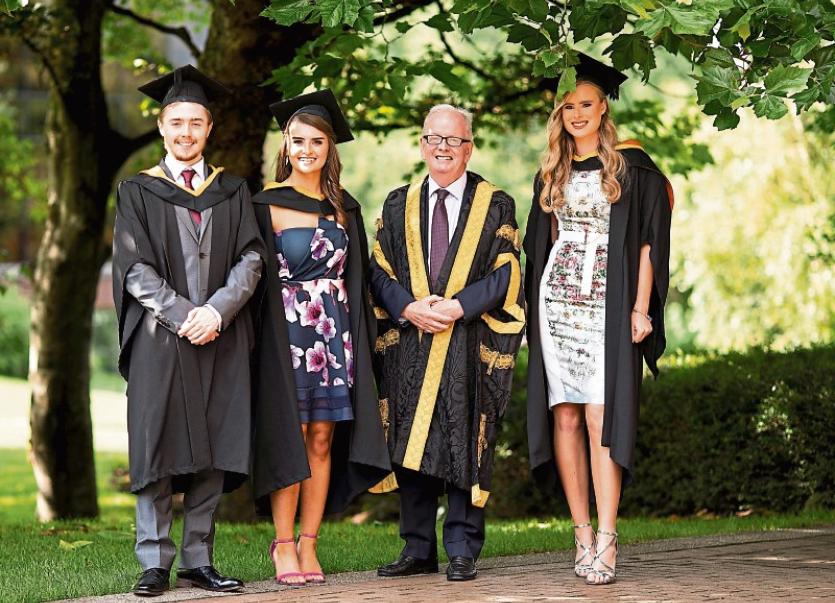 IT HAS been a gold standard week for the University of Limerick, following a week-long celebration that saw thousands of students conferred with degrees across all specialities.

While the weather hasn’t been overly kind to those wishing to get their customary snaps in the great Plassey outdoors, there was widespread joy after more than 3,400 collected their parchments at the University Concert Hall this week.

This was particularly the case for three bright sparks, who each received a perfect academic score after years of studious dedication.

Jenna Bromell, of Castletroy, Eoin O’Brien, of Ennis Road, and Ardnacrusha’s Ciara Leahy scored the coveted 4.0 QCA in their respective courses, and each were presented the UL president’s special distinction award this Wednesday.

Jenna graduated with a Bachelor of Engineering in Chemical and Biochemical Engineering, adding to her many lifetime achievements, which include representing Ireland on the running track in 400m and 800m at underage levels.

Jenna, who sat on the Chemical Sciences Athena Swan Committee at UL, was a recipient of the president’s award scholarships. She will take up a role with Johnson & Johnson in the coming weeks.

Eoin, the Ennis Road man, who completed his Science in Computer Systems degree, was selected as one of the 30 under 30 by the Sunday Independent last November and in 2015, and was awarded the highest academic achievement for that year’s Leaving Cert.

Eoin was also awarded the Stryker Scholarship when he began his studies at UL and is also the co-founder and chief technical officer at Tracworx, a real‐time, patient tracking system that drives hospital efficiencies, resulting in excellent care throughout the entire patient journey.

He said that he was exploring a number of PhD options for the future.

Ciara Leahy from Ardnacrusha also graduated with a perfect score and a Bachelor of Science in Industrial Biochemistry after completing a co-op placement in Abbott Technologies.

Ciara said: “I loved my time at UL as it opened so many doors, but my passion now is to stay and complete a PhD in cancer research.”

And it was a real family affair on Tuesday when new vice president for research, Prof Noralee Kennedy, who conferred her own parents Pat and Phyllis Kennedy, with the Certificate in Local History, which was hosted off-campus.

Speaking after the ceremony, the Kennedys said that it was really a “teamwork graduation”.

The conferring ceremonies kicked off on Sunday with the graduation of UL’s first cohort of the postgraduate diploma in school leadership programme, comprising 240 students. UL president Dr Des Fitzgerald urged the Government to decide on how it would support universities and UL to compete internationally and to support the region’s ambitions.

Read also: SLIDESHOW: Thousands to graduate at University of Limerick this week