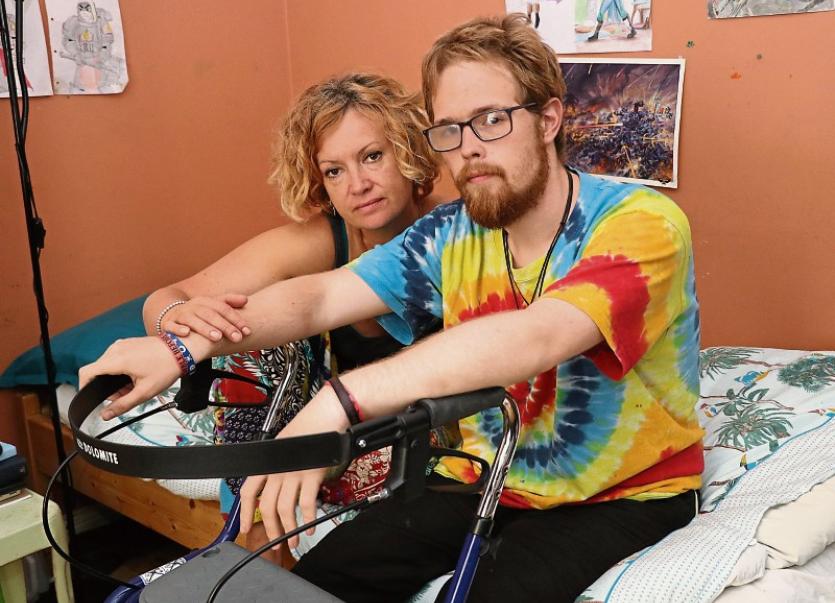 A YOUNG man battling multiple sclerosis (MS) is bidding to raise €70,000 in a last ditch attempt to live a normal life.

The family of Leon O’Connor, a 22-year-old animation student from the city centre, have set up the Leon’s Lifeline appeal to raise money so he can go to Russia for stem cell treatment which is not available to MS sufferers on these shores.

Leon was diagnosed with MS, a disease of the brain and spinal chord back in 2016. It’s only this year his condition has deteriorated, losing senses in his limbs, and having to use a walking frame to get around.

“His walk is really bad. The neurons which connect to his feet get worn away. The feeling in his feet is really bad. He has had a massive decline since February, and it’s hard,” said his mother, the well-known local food writer Valerie O’Connor.

His immune system is weakened, she added.

“He has an overactive bladder, so you can imagine what that means. He would be walking to college and go into cafes, and ask to use the toilet. He might be refused,” Valerie said, “It’s just awful. Things that a  young man of 22 should never have to think about.”

Leon is hoping to travel to a clinic in Russia for a Hematopoietic Stem Cell Transplantation (HSCT).

While the treatment is severe, success rates are high, and Leon’s family has discovered a clinic with a good reputation.

But, Valerie says, time is not on their side.

She said: “HSCT only has a chance of working up to a certain level of disability and Leon is almost at the cut-off point so he needs to get there as soon as possible. Leon’s quality of life is very poor compared to other 22 year olds. He can’t go anywhere alone and needs constant help in everyday tasks.”

Despite constant challenges, Leon has learnt a great resilience his mother said.

”He has a lot of will. It takes a lot to knock him off course. Leon is an amazing guy. He never has a bad word to say about anybody. It would never occur to him to gossip. He’s very grounded, he’s a very gentle person. He’s always known his own mind, and has a strong sense of himself,” she told the Limerick Leader.

It has taken a toll on her.

“When long-term illness comes into your life, it affects you financially enormously. It affects your stress levels, your mental health, your availability for work. I used to write a lot more. I just now find it almost impossible to sit down and write chirpy articles about food when all this is going on,” she admits.

One positive to come out of this experience – and there aren’t many – is that Valerie’s friends in Limerick and around the world have rallied to support her.

Already the Leon’s Lifeline page has amassed more than €15,500, with donations coming in from as far afield as Cuba and Greece.

On Wednesday, September 25, celebrity chef Rachel Allen will be hosting a cookery demonstration at the Limerick Strand Hotel, with all proceeds going to the appeal.

You can donate to Leon’s Lifeline here. Alternatively, any donations can be dropped into the Limerick Strand Hotel, 061-421800.