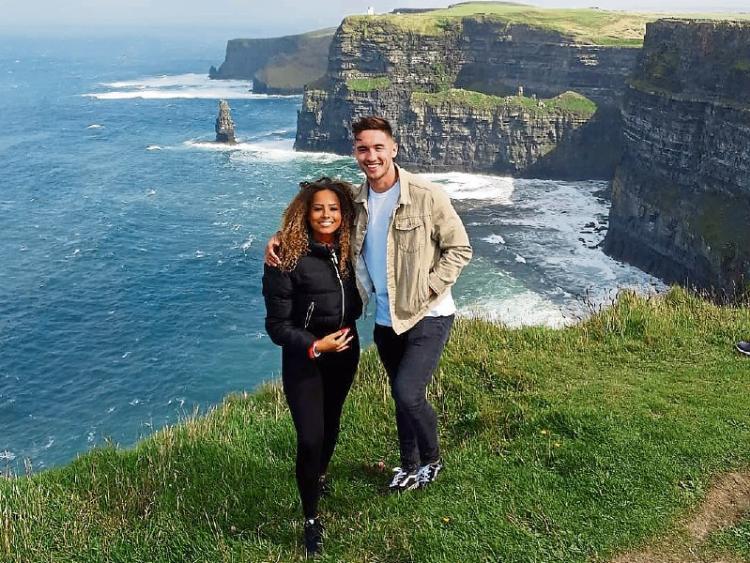 CASTLES, cliffs and romantic boat trips were on the agenda for Ireland’s couple of the moment last weekend.

The couple spent a romantic night in the iconic Dromoland Castle Hotel in Co Clare, where a room can cost more than €2.500 a night.

Also featuring on the couples itinerary were the Cliffs of Moher and a family boat trip, as well as a stop-off in Amber nightclub here in Limerick.  Amber described the 24-year-old Sevens player as “the best tour guide” on her Instagram, with Greg replying that her visit to his home country would be the “first of many visits.”

On Sunday, the pair took to the capital to watch the All-Ireland hurling final in Croke Park, a “free” trip sponsored by Guinness, as revealed on Greg’s Instagram story.

"No idea what's going on, but having fun," said 21-year-old beautician Amber, who was snapped looking very cosy with her Limerick man in the crowd.

The pair kept their millions of followers updated on their gallivants over the weekend with social media posts, including some playful teasing of Amber who apparently revealed she “loves” Greg.

"I haven't even asked her to be my girlfriend yet and she's saying online that she loves me. What do you have to say about that? Hello, hello? It's been four weeks. You said you love me!" he joked on his Instagram story captured on their way to Croke Park.

The couple finished off their weekend with a stay in The Devlin in Dublin, a new and trendy spot in the city centre complete with rooftop bar before Amber jetted home to Newcastle on Tuesday, August 20.

The pair, who are exclusively dating but yet to go official, shared the £50k Love Island prize and have agreed to work hard to keep their romance alive despite the distance between them.

Greg, who has reportedly joined a Dublin law firm and will sit his FE1s in October, is also set to rejoin the Sevens team later this month ahead of their Olympic qualifier.

Meanwhile, Amber has said she will continue to work at her Newcastle beauty salon, and aims to expand the business.

Despite becoming Limerick’s latest reality TV star, Greg has decided to keep a relatively low profile and has moved back to Dublin for work commitments.

His agency Line Up Sports recently revealed that the young sportsman would not be partaking in nightclub appearances like his fellow co-stars due to the “reputational challenges” it could pose for the trainee solicitor and professional rugby player. Greg, who now has over 1.6m Instagram followers, could make more than €5k per post according to experts.