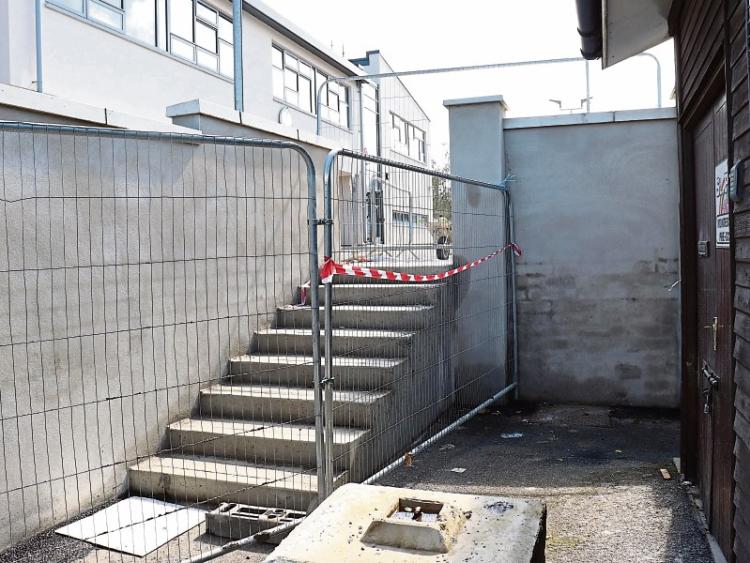 A DOORADOYLE pensioner is upset after a ramp which linked his street to the local church was replaced by a “ten-foot high wall” and a set of steps.

Jim Sadlier, a local notes correspondent with the Limerick Leader, spoke out as the works to expand St Paul’s National School reach a conclusion.

A result of this, he says, has seen the access point “lopped off” by an “eight to ten foot high wall”.

“This wall cuts off what is a right of way by this building for parishioners walking to attend St Paul’s Church,” he said, adding many elderly residents will struggle to manage the steps.

The move means locals in Lawndale Drive and the surrounding area are left with a long walk up to St Nessan’s Road before effectively doubling back on themselves to attend St Paul’s Church and the other facilities in the area.

“This was the way people went down to the church or out onto the St Nessan’s Road if they were rushing for a bus or walking into town. The ramp was there on the right and the steps were down to the church. It was the way women who would be bringing children to school from outside Dooradoyle. They would walk up the ramp and bring them over. They can’t do that now unless they go around by the new walkway and go up the steps,” he said.

Mr Sadlier says going to Mass has become more of a challenge for him, unless one of his neighbours gives him a lift: ”For people who would be disabled, it’s an extra effort too,” he added.

The long-time resident said there is concern in the area over this.

“Residents have spoken to me about this. These are residents who have moved on in age and it means they have to walk that extra bit or go down these steps, which I have not used yet,” he said.

Mr Sadlier insists he has nothing against the school’s expansion.

St Paul’s National School is currently operating out of the old Scoil Carmel school, O’Connell Avenue, while its expansion is completed. The land for the expansion was given to them by the Limerick Diocese which has been contacted for comment.

Read also: Limerick city has the highest annual increase in rent out of any city in the country