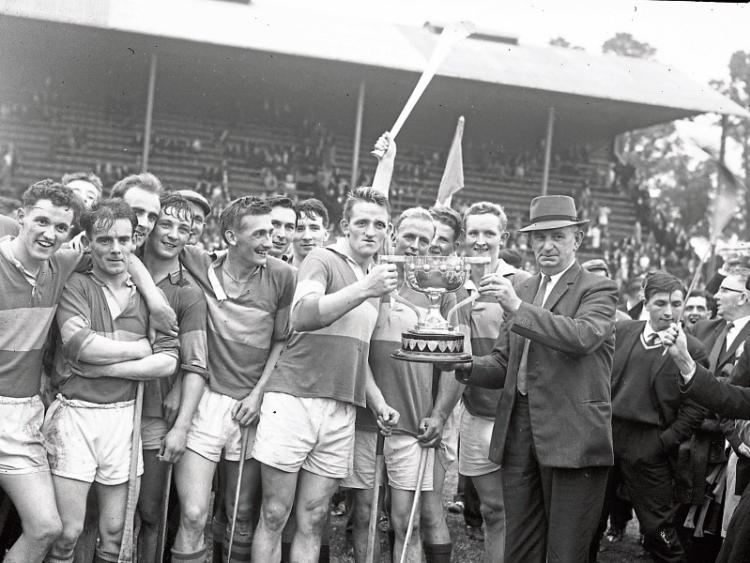 They played different games but both represented their parish and county with pride, heart and skill. The late Johnnie Hayes is the only Cappamore man to have been part of a Limerick All-Ireland Minor Hurling winning team in 1958. He was a minor again the following year.

Johnnie will be remembered as a classy forward with a lovely pair of hands and was hard as nails. The Dromsally man went to his God last month aged 78.

Johnnie and his beloved wife Catherine raised one boy, Con, and four daughters - Bridget, Josephine, Helena and Caitriona. Around 10 years ago there was a tidy up done in the attic. Hidden treasure was uncovered - Johnnie’s Limerick jersey from the 1958 All-Ireland win. It was in mint condition and rare as hen’s teeth.

The Hayes family framed the jersey and surprised Johnnie with it. He was delighted as it brought back many fond memories.

Johnnie was laid out underneath it in the house as it was hanging on the wall. Con described his father as a brilliant husband to Catherine and a brilliant father to him and his sisters. Johnnie doted on his grandchildren - Katie, Emily, Sean, Niamh and Finn - and they in turn adored him.

Although quiet in his demeanour, Johnnie was a good man to chat. And because everybody knew him from the GAA plenty wanted to talk hurling.

“I can remember heading off with him when I was a youngfellow and sure we’d never get home,” smiled Con fondly.

Johnnie was a farmer all his life. In his younger days it was dairy and beef and just beef in his later years. While his cattle enjoyed the sweet Cappamore grass the Cappamore man was also excelling on fields around Ireland.

In the publication, Making the Welkin Ring booklet, James Lundon wrote that Limerick started the 1958 minor campaign with an excellent win against Tipperary, who were going for a 7 in-a-row in Munster. It was the golden era of Jimmy Doyle and many more. The Munster semi-final was against Clare, and after securing a lucky draw by the unusual score of 3-1 to 1-7, won the replay by 27 points. Limerick had a facile victory over Waterford in the Munster final by 8-9 to 2-5. Antrim were easily dispatched in the All-Ireland semi-final. Galway awaited in the final. Johnnie played a leading role.

“Limerick rode their luck and but for a tally of 2-1 from Johnnie could have lost the game, squeezing past the Galway lads 5-8 to 3-10,” wrote James.

Johnnie was minor again in 1959 but Tipperary weren’t to be beaten two years in a row. It was the day of the “big wind” - the remnants of an early-summer hurricane. Johnnie often told the story of seeing a point in the senior match being blown back into play. There was no hawk-eye in those days!

Johnnie and his brother Mikey were separated by just 13 months and were inseparable. The way their birthdays fell meant they never hurled minor together for Limerick but they played countless times on the same team with Cappamore.

Johnnie went on to play senior hurling with Limerick but the 60s were a barren decade for the county.

As well as being the only Cappamore man to win an All-Ireland minor medal he captained the parish to their last Limerick county championship in 1964. He was also a selector.

In James Lundon’s booklet, Fr Brendan Duggan wrote: “As a young player I always felt proud and safe to play with Cappamore. I used normally play as a wing back and when you had Eamonn O'Malley, Tom Ryan (M) and Willie Cunningham behind you, and Sean Ryan (M) beside you, with the likes of Donie Flynn and Johnnie Hayes up-front, we young inexperienced players felt well protected.”

Once his decorated hurling career came to an end, Johnnie’s wife, raising their children and working the farm became his sole focus.

But the competitive instinct always remained and he was a bit of a card shark. In the winter months Johnnie would be found playing 45 in Cappamore, Murroe, Doon, Knockainey - you name it. He will be sadly missed in 45 circles and by all who knew him. Johnnie was an ace in the pack.