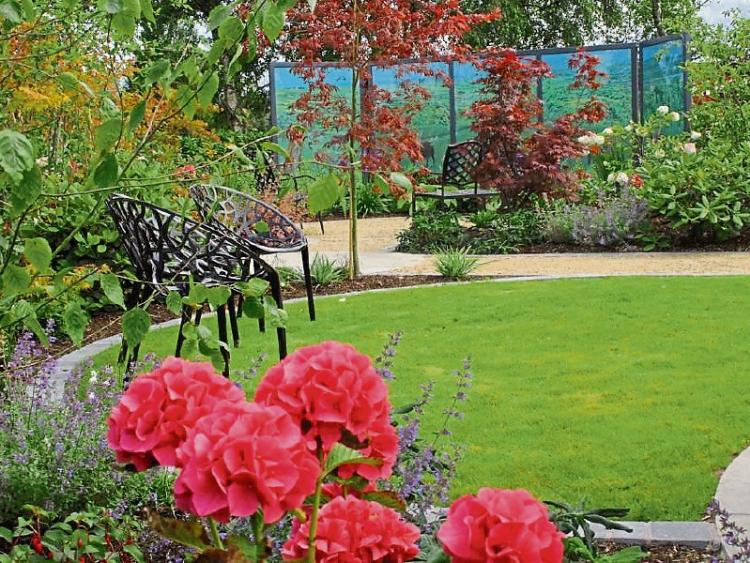 The Sensory Garden at University Hospital Cork in memory of James O'Brien, Glin with mural by Athea artist Jim Dunne in the background

WHILE they were taking place, the Full Moon Barn Dances in Ballinruane Wood were the talk of West Limerick and attracted hundreds of young people to the small community of Kilmeedy.

And now they are no more, there is a bit of a gap in the summer social calendar.

“It was great while it lasted,” said Michelle O’Brien, one of the driving forces behind the events.

But the cycle of barn dances has left a powerful legacy, raising over €127,000 for good causes such as St Gabriel’s Hyrdotherapy Unit, Pieta House, Crumlin Children’s Hospital and the Jasmine Ward in St Ita’s Hospital, Newcastle West.

And as a result, a beautiful sensory garden has now been opened for the use of cancer patients, their families and the staff of the Oncology Ward  at University Hospital Cork, in memory of James O’Brien from Glin.

“The idea for the garden came from my dad,” Michelle O’Brien explained. Sadly James, who was passionate about traditional Irish music and was a stalwart of Comhaltas Ceoltóirí Ireland, died in June 2016 before the idea could become a reality.  Having spent time in the Oncology Ward himself, Michelle explained, James “saw the need for it.”

“There was no outside space and while you are undertaking chemotherapy you are at high risk of infection,” she continued. “But you need to be in a private space and this garden provides that.” It  also offers a quiet space for patients to be apart for a while or to share with their family or simply to get away away from the medical environment, Michelle added.

The aim of the 2017  barndance was to raise the €35,000 needed to create this sensory garden, but even with the money in place, there were delays to the project due to planning issues. The original site had to be dropped and another located within the hospital grounds, Michelle explained, and the work finally began in February.

The garden was officially opened on August 24.

One of the many special features of the garden, for Michelle and her siblings, is the mural painted by Athea artist Jim Dunne. “It is a view of the Shannon from the house at home in Glenagragra, Glin,” she said. Her dad, she is certain, would have been very happy with that.

But there has been an additonal bonus arising from the bonanza 2017 barndance and last Monday evening, two West Limerick projects got a lovely windfall when they each received a cheque for €7, 631.69. The two were the Feenagh Playground Committee and the Dromcollogher and District Community Respite Care Centre. “On behalf of the Barndance Committee, we want to say a huge thank you to all the volunteers, all the sponsors and all those who helped make the events a success,” Michelle said. They were particularly anxious to let people know how the funds from the final barndance had been spent, she added.

Read also: Newcastle West to host its last Flower Show after half a century