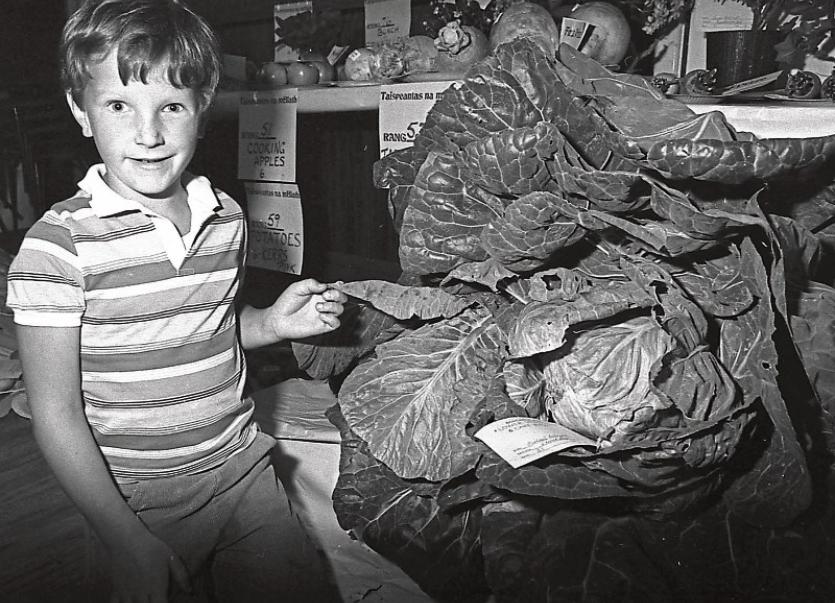 Young Ivor Looney, Croagh, pictured at the 25th anniversary NCW Flower Show alongside a giant cabbage. This year's 50th anniversary show is set to be the last

THE Newcastle West Flower Show will celebrate its Golden Anniversary next week when the 50th show gets underway in the town’s community centre.

But sadly, half a century after it began at a time of high hopes, it may also be the last as the current committee members, who have served for many years, are retiring.

“Maybe somebody else will take over,” entries secretary Patricia Lenihan said this week. But she and the other officers feel they have done their bit and it is time to call it a day.

“We are all getting older,” she said. And, for many of them, with the advent of grandchildren, life has become very busy and the numbers of those prepared to put in the work have dwindled.

“It is a long time to keep it going,” she said. And there is satisfaction and not a little pride in that.

The hope now is that next week’s show will prove a fitting end to their labour of love.

Liam O’Mahony and Martin Byrnes were both teenagers and active in the Tidy Towns Committee in 1969 when the idea of the show was first raised. As Liam recalled this week, the Newcastle West Agricultural Show had gone into abeyance a few years before and with it the Flower Show. The older members of the Tidy Towns committee, Liam said, were constantly bemoaning the loss of the “old show”. “We were fed up of listening to that, at least I was anyway, and we asked how do we start a show?” Liam recalled. The following year, on August 14, 1970, the Tidy Towns committee decided to hold a Flower Show, and three weeks after, on September 3, the first stand-alone Flower Show was held in the River Room Motel.

“We were young. We just took it on,” Liam said. They got an old catalogue from the secretary of the Agricultural Show, asked for advice from the Flower Show committees in Rathkeale and Kilmallock and got a catalogue printed up.

In addition, they held a raffle, something which, Liam added, became a fixture in later shows and a “Pat Dalton speciality” and that raised £4 and four shillings.

Some time later, he added, the Flower Show parted company with the Tidy Towns.

“It would be disappointing if a town that is expanding like Newcastle West lost the show,” Liam said. It encouraged people to take care of their gardens, to grow their own fruit and vegetables and contributed to their well-being as well as being good for the environment, he said. “It would be a pity if all that was lost. Maybe the committee shouldn’t dissolve but should make an appeal to young people to get involved.”

To mark the golden anniversary, two special categories have been added to the long list of competitions in this year’s show. We have a special category in flower arranging to mark the 50th anniversary which we are calling Congratulations, and we are giving bigger prize money for that than for other categories. We are doing the same in the bakery section where the category is a 50th Celebration Cake,” Ms Lenihan said.

In all there are some 103 categories for adults, ranging from flowers, flower arranging, vegetables and pot plants to baked goods, art, craft work, pottery and photography. In addition there are 14 categories for children.

All entries should  be submitted to committee members by 6pm next Monday and exhibits will be accepted at the Community Centre on Tuesday and up to 11.30 next Wednesday.

Judging will take place in the afternoon. and the doors open to the public at 7.30pm and again on Thursday evening at 7pm. Prize-giving will begin at 9pm.