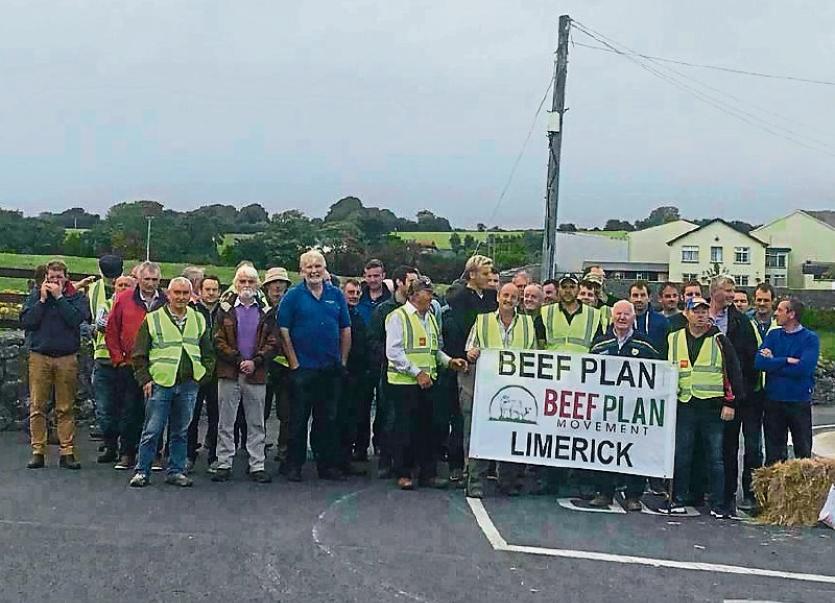 The ones that have taken cattle in, he said, are “mostly a few feedlot trucks”. A number of incidents have been reported at some of the other 19 factories where protests are being held. However, Rathkeale has been relatively quiet.

“There was an incident last week with one driver speeding through the picket and hitting off one of our members. He’s a bit shaken but has continued with the protest. Another feedlot owner was physically aggressive with our protestors but we remained peaceful and did not react to provocation,” said John. The Martinstown suckler farmer said they have got fantastic support. On Monday he said there were up on 100 farmers present.

“It is really gaining momentum with beef, dairy, sheep farmers present. There is a good turn-out from Limerick with farmers from all over the county.

“Locals are showing great support with one lady bringing us down sandwiches on Sunday. Motorists are blowing their horns in support. Farmers from all groups are now joining the protest,” said John, who confirmed it is continuing 24 hours a day.

The Beef Plan Movement commenced its nationwide protest outside meat processing plants on July 29. The protest continues to gain momentum as 20 plants are now being picketed. Sean O’Connell, Limerick Beef Plan secretary, called on all beef farmers to respect the picket and refrain from sending cattle to the factory.

Sean, organiser of the protest outside ABP Rathkeale, stated: “It is imperative farmers support this protest. We have real momentum now with farmers offering help from all over the South-West. People have come from as far away as Dingle and west Clare to help out. Some of these people are not even from a farming background and want to support the rural economy.”

He said the protest aims to address the major problems in the beef sector.

“The current price paid to farmers is completely unsustainable and with base prices at approximately 3.45/kg there is no margin left for the farmer. The processors and the retailers are dividing the margin between them and leaving nothing for the producer. If the farmer is to have any future going forward a cost of production plus a margin will have to be factored into the price of beef.

“Also, there is an issue with some of the regulations in the sector. Rules such as the 30-month age limit and the four-movement rule have little purpose but to drop the value of beef and force farmers to sell when the prices are low,” said Mr O’Donnell, who adds that the protest will continue indefinitely.

“It is up to Meat Industry Ireland to take on board our issues and come up with a workable solution to the current dilemma our sector is in. The protest will continue until both sides have agreed a solution. The first week of the protest has seen a 27% drop in the factory slaughter numbers.

“This is set to increase this week with more farmers supporting the movement and keeping their cattle at home. We also need more farmers to step forward and join the picket line in Rathkeale, especially farmers from Limerick. There is a real opportunity for progress with factories desperate to fill contracts. We need all farmers, from all farming groups to step forward and support this protest,” he concluded.