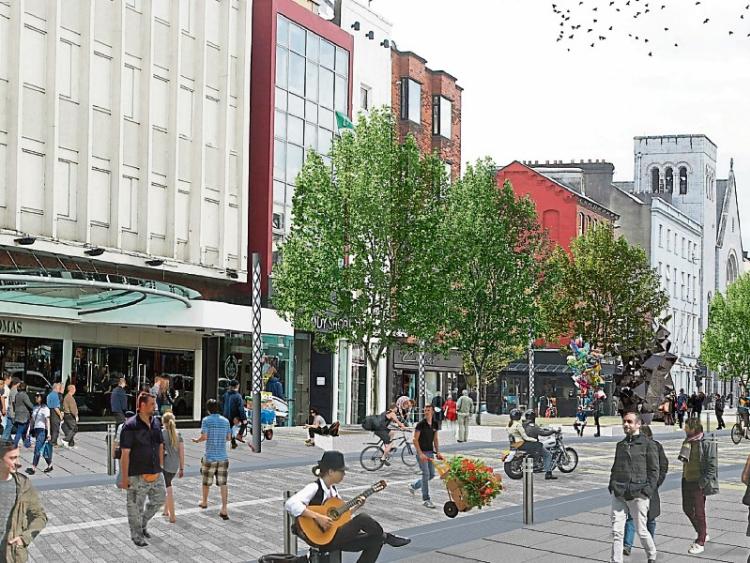 “A FUDGE that will satisfy neither traders or the general public. A compromise that suits no-one”.

That is the view of metropolitan district leader Cllr James Collins on the newly unveiled plans for the revitalisation of O’Connell Street, which have been published this week.

The long-awaited €9m proposals for the city’s main thoroughfare have gone on public display.

At the heart of the blueprint is a shared traffic surface.

The news that cars will not face a ban from Limerick’s main thoroughfare will no doubt be greeted with dismay in some quarters, as this was one of the reasons the initial plans faced opposition.

“There has been talk of pedestrianisation and revitalising O’Connell Street for more than 20 years now. The Council looked at this in 2007, then again in 2016. What happened to the scores of public submissions for O’Connell Street pedestrianisation which were submitted in 2016? There were lots of good ideas and imaginative proposals submitted by members of the public in 2016, but I don’t see any of them reflected in the current proposals,” Cllr Collins said.

However, councillor Joe Leddin, the new chair of the transport committee, says he does not think it is feasible to ban cars from the city’s main street in one fell swoop.

“It’s one step at a time. I don’t think it’s realistic​ that we can after time immemorial suddenly turn around and abandon all provision for cars in the heart of the city – nice and all as it sounds. I’m all for sustainable means of transport, but I don’t think it’s feasible to simply overnight take the cars out of the city. We need to do it on a phased basis,” the metropolitan councillor said.

The proposals show there will be a reduction in the width of the two traffic lanes on the stretch between the Denmark and Cecil Street junction, with a resultant increase in footpath widths.

Council planners are also proposing the laying of street furniture in O’Connell Street, which will include seating areas, bicycle stands and lighting, as well as features such as sculptures, pedestrian plazas and water installations.

A tree planting programme will be kicked off, with 11 trees proposed to be introduced beside the planned rugby museum. It’s anticipated overall in the scheme, 22 trees will be planted.

Between the trees, seated areas and bicycle parking areas will be provided, with the hope these will act to separate the road and the pedestrian area.

Other features of the scheme include the relocation of parking and loading spaces from O'Connell Street to adjacent side streets, with the speed limit on the main street cut to 30km pr hour.

A central plaza at Thomas Street beside Brown Thomas will offer the potential for a future artwork to be installed to create a further focal point for pedestrian gathering.

The project is future-proofed as the street can be quickly adapted when the Transport Strategy for Limerick is completed. An interactive surface-level water feature is also proposed opposite the Augistinian Church.

A new bus stop is to be provided at Patrick Street – this will move from the stop in place at the church.

The plans are available to be viewed up to close of business on Friday, August 23.

Maria Donoghue, who is the head of the design and delivery department at council said: "We want citizens, businesses and groups to take advantage of the enhanced public realm we are offering – O’Connell Street will become a destination, not a thoroughfare. With the wider footpaths, high quality street furniture, reduced traffic volumes and enhanced landscaping, this will become a more comfortable environment for Limerick’s citizens and visitors to animate this new backdrop with the vibrancy we want it to facilitate, and participate in urban life such as on-street cafes and outdoor exhibitions or performances.”