Limerick Beef Plan protest in Rathkeale to go on ‘indefinitely’ 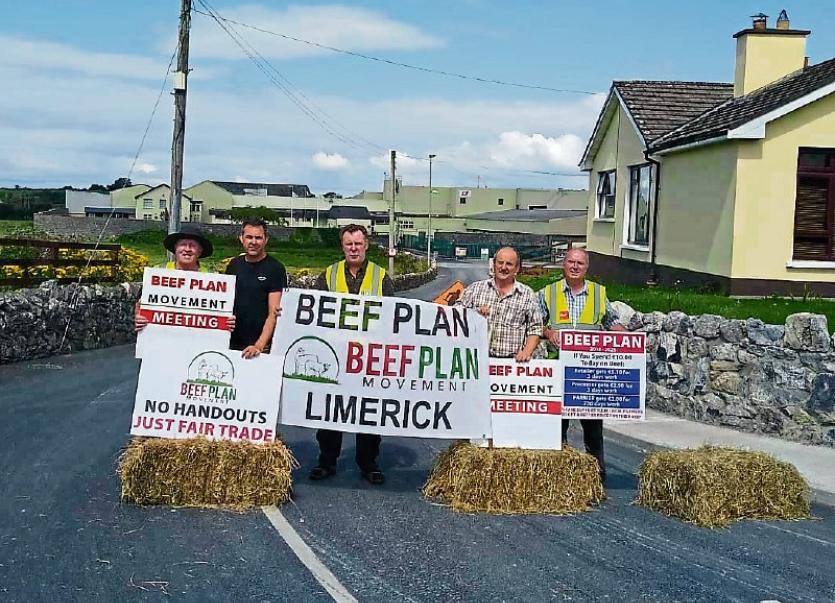 FARMERS continue to protest outside ABP in Rathkeale this Friday.

The factory is one of a number across the country where farmers have set up a 24 hour  picket. On Monday, the Beef Plan Movement commenced a nationwide protest outside beef processing plants. They say that presently farmers are being paid an unsustainable price for their beef which is well below the cost of production.

Sean O’Connell, secretary of the Limerick Beef Plan Movement and organiser of the protest at ABP Rathkeale, told the Limerick Leader it is “imperative” that all farmers support this peaceful protest.

“We need as many farmers as possible to join us. The protest will continue indefinitely with farmers outside the Rathkeale plant 24 hours a day,” said Mr O’Connell.

He said many farmers are now postponing sending their cattle to be slaughtered in solidarity with the protest.

“We would like to see all farmers refrain from sending cattle to factories until the protest has concluded. This protest will continue indefinitely until Meat Industry Ireland meets with our representatives and presents a workable solution to the current crisis in the beef sector,” said Mr O’Connell.

There have been no incidents in Rathkeale. However, a farmer who was protesting in Cahir was knocked down and injured by a vehicle pulling a trailer load of cattle.

According to a spokesperson for the Beef Plan Movement, the farmer was supporting the series of nationwide protests outside beef processing facilities when he was injured by the vehicle that was bringing cattle to the processing facility.

An ambulance brought the injured party to hospital where his condition is said to be stable.

The Beef Plan has issued guidelines for the protests. The Irish Council of Civil Liberties were contacted and gave information that helped the movement to compile the document.

The Beef Plan’s guidelines say it is permitted to ask any individual presenting cattle for slaughter in a non-threatening way to support the protest by bringing their cattle home.

However, if that person decides not to support their protest they have to accept their decision whether they like it or not.

Separately, this Wednesday IFA’s National Council and Livestock Committee members are holding a protest at the EU Food and Veterinary Offices in Grange, Co Meath.

Speaking at the protest, IFA president Joe Healy said the crisis in the beef sector is an EU-wide problem driven by Brexit uncertainty and falling consumption.

“This is compounded by substandard imports coming into the EU. The situation is now intolerable for farmers and solutions must come from Brussels and the Irish Government.

“The first move by the EU must be to stop substandard imports, which are undermining the EU beef market. Significant quantities of substandard beef from Brazil are already coming onto the EU market,” said Mr Healy.