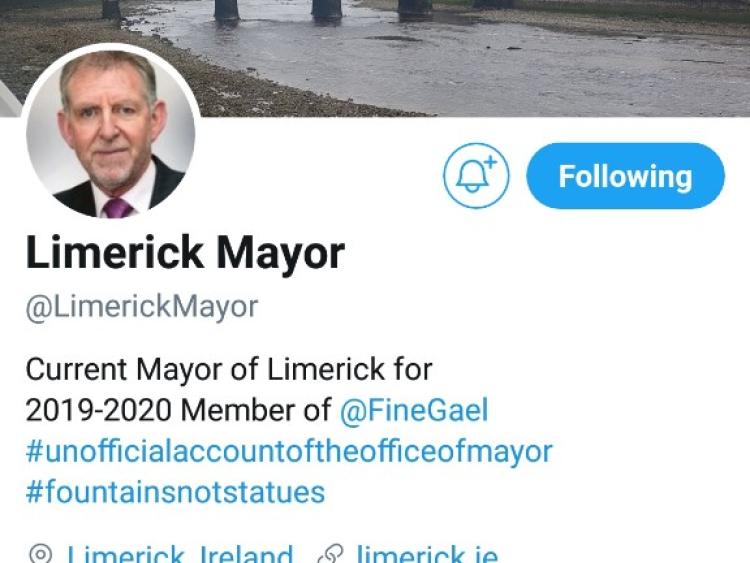 TWITTER has removed a page apparently parodying the Mayor of Limerick Michael Sheahan over fears it could “bring the office into disrepute”.

Limerick City and County Council’s marketing team issued a formal complaint to the social media firm over the satirical page, which then acted to suspend the account.

The Twitter account – @LimerickMayor – appeared to be a parody of the first citizen, with the profile text reading “fountains not statues”.

This is an apparent reference to comments made in Cllr Sheahan’s first speech as mayor, when he called for Brown Thomas to be moved and replaced with a water feature.

One of the few local politicians who does not widely use social media, Mayor Sheahan has distanced himself from the parody page this week, saying: “It’s not the mayor’s Twitter page, that’s the important thing.”

“I never set this up. Nobody close to me or connected to me set it up,” he added.

The page has now been suspended by Twitter for “violating” the rules.

A local authority spokesperson confirmed this was on foot of their complaint.

“It could have brought the office of the mayor into disrepute. This is all to do with reputation. You’re protecting the office and the integrity of the mayor of Limerick,” they said.

Since the page was suspended, the Limerick Leader was unable to contact its owner.

WATCH: The Instagram DM that had Love Island winner Greg O'Shea 'freaking out'