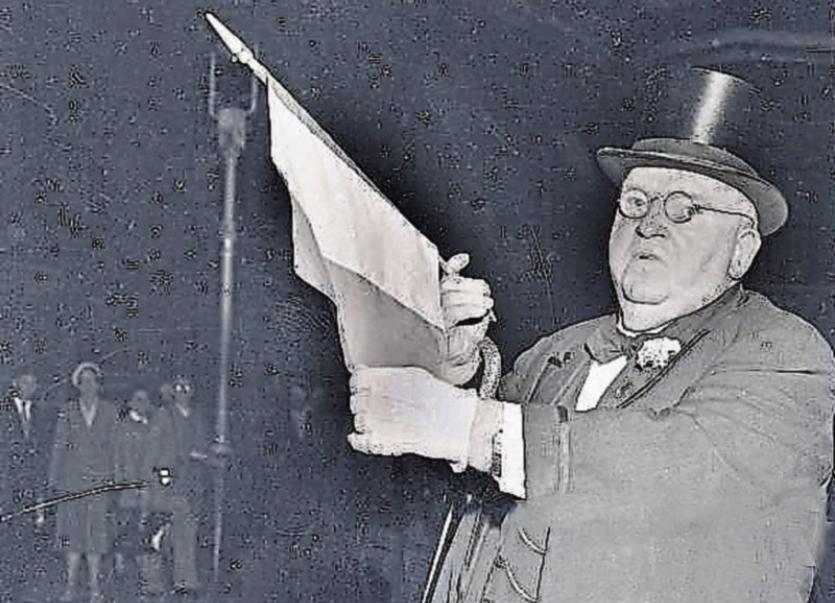 THE colourful and eventful life-story of West Limerick man, John J Hanley,  who made national and international headlines in the last century was the focus of a radio documentary broadcast on RTÉ last weekend.

But now, his great-grandniece, Katrina Collins, who featured with her father Liam, in the programme, is planning a book about the man known as the Baron of Broadway.

There are, she explained,  a lot more stories to be told about the man from Strand, (a few miles from Newcastle West) than made it into the documentary.

Katrina  began gathering material on her great-granduncle a number of years ago, following the chance discovery that he had donated money for three stained glass windows in what had been his local church in Monagea. But, when she began digging into newspaper and other archives, she was staggered with the amount of coverage his exploits got in publications such as the New York Times.

Born in Strand in 1883, John J left for the US sometime in the early 1900s, according to Katrina,working in bars and hotels including the Waldorf Astoria. He  became a US citizen in1907 and married Irish-American  Monica Scanlan in 1911.  They had one daughter who died young of meningitis and the marriage didn’t last.

But it was  the introduction of Prohibition, banning the sale of alcohol,  that made John J’s fortune when his Cafe on Broadway became a speakeasy selling bootleg booze. According to the documentary, he also imported poteen from Connemara into Canada and smuggled it across the border.

One of the first mentions of him in the New York Times was in October 1919 when he was fined $500 for a second breach of Prohibition laws. Later that same year, he was held up at gun-point before opening his safe for robbers who made off with $1,400, a huge sum at the time.

“He was extremely wealthy,” Katrina said. At one point, he had a penthouse apartment on Broadway and a fleet of cars. But he was also very generous, to his family, to Strand and to various charities, for example, donating $1,000 every Christmas for 20 years to an orphanage. He also played generous host and benefactor to GAA teams in the US and to visiting teams. “He definitely was a philanthropist,” Katrina added.

According to Katrina, who has spoken to people who met and knew him, he was a very friendly, generous and jovial man. “They loved being in his company,”  she said. “He was very likeable but he enjoyed having the bit of money.”  He was also a man of style and was rarely seen without his signature diamond tipped walking cane and a silk hat.

However he managed it, the Baron survived the Roaring 20s and the Great Crash of 1929. Following a  move to Detroit, sometime in the 1930s or 1940s, John J came back regularly to West Limerick, always with a chauffeur and in a car painted in the colours of the Irish flag.

His grand-nephew Liam Collins remembers meeting him from some of his last visits in the 1950s and  believes he adopted the tile Baron from the fact that Strand is in the Barony of Glenquin.

“He used to stay in Egan’s Hotel which is now the Central Bar,” Liam recalled on the programme.

The Baron’s most singular claim to fame however were his various attempts to “buy” back the Six Counties from the British. In the US, he was an active member of the United Irish Counties Society, which campaigned for reunification, something John J took very seriously.

He wrote to Taoiseach Eamon De Valera, to Lord Basil Brooke in Northern Ireland, to various prime ministers in Britain and even to King George VI about his scheme. On several  occasions he crossed the border into Northern Ireland, and announced himself in both Belfast and Stormont as a potential purchaser for the six counties. His tricolour car set off a mini-riot at one stage.

However, as his one-time chauffeur Austin Gannon recalled in the documentary, on October 3, 1955, he drove the Baron in his limousine to No 10 Downing . “The two of us walked up to No 10. I knocked on the door. The door opened and he (the Baron) said ‘I wish to talk to the prime minister’. He was told he wasn’t in, he wasn’t available at the time,” Mr Gannon said relating the incident. “ He handed in letters that he wished to buy the six counties. We left there. We headed off. He was disappointed.”

However, a photograph of him appeared outside No 10, wearing a morning suit and top hat with white gloves unfurling the Irish flag.

A year later, John J was knocked down in a traffic accident and died. At the time of his death, he was described as a pawnbroker  living in a Detroit boarding house, thus sparking the question of what had happened all his wealth?  The mystery remains.

New podcast from @RTEdoconone Hear the near-unbelievable story of #westlimerick man, John J Hanley, who in the 1950s, tried to buy the six counties of Northern Ireland and gift them to the Republic of Ireland #unitedireland https://t.co/wNgFfHHnpC

The documentary can be listened to on the RTE Playback website, on Doc on One.