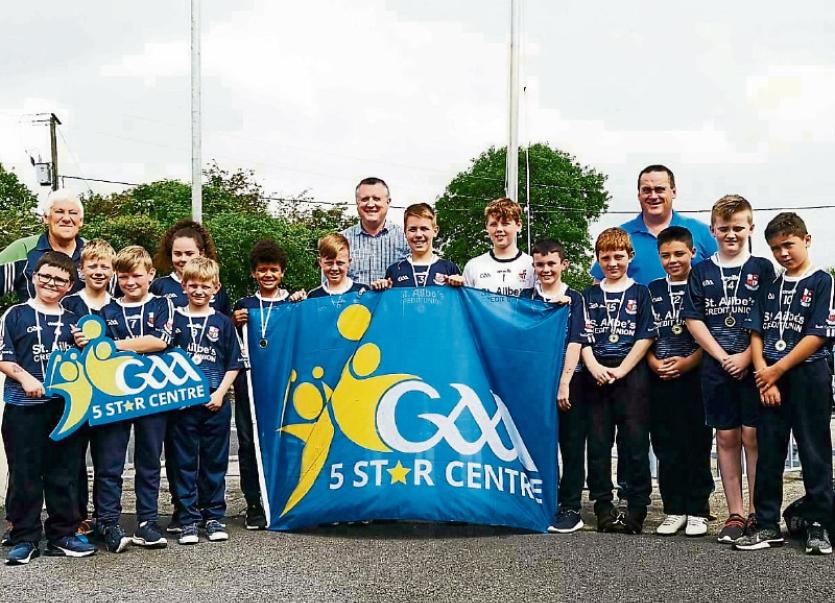 Two players who were picked to play on the Primary Game team this year, Tom Carroll and Mickaella Ryan were on hand to raise the flag.

To become a GAA 5 Star Centre, Caherconlish NS teachers Ms Cleary, Mr Ryan and Ms Power organised a range of activities for all children to participate in, with GAA personnel acting in a support capacity.

The diverse range of activities include games such as Have A Ball, Fun & Run, Camán & Play, Catch & Kick, Skill Challenges and Go Games. The initiative aims to ensure every child got 60 minutes of moderate to vigorous activity per week throughout the 26 weeks of the school year.

In doing so, it enhanced the development of children’s movement abilities and well-being so that children experienced fun, friendship, fairness, freedom and, ultimately, developed their fitness, said Pa Ryan, principal.

“The programme was very well received by all the pupils who took part in the various activities and it made a huge difference to their skill levels,” said Mr Ryan.

“We are indebted to games development officers James Ryan, Ollie Coffey and Noel Hartigan, Club School Link Mike Boland and of course the teachers in the school who embraced the programme with open arms”.

Mr Ryan says it goes hand in hand with their school being an Active School.

“Whereby we try and give the children in our care as many experiences as possible. The role of the Club School Link was vital to the success of the programme. One major positive aspect of the programme was that many pupils who had given up on GAA sports started to re-engage in a very positive way,” said Mr Ryan. More good news for a county on the crest of a hurling wave.