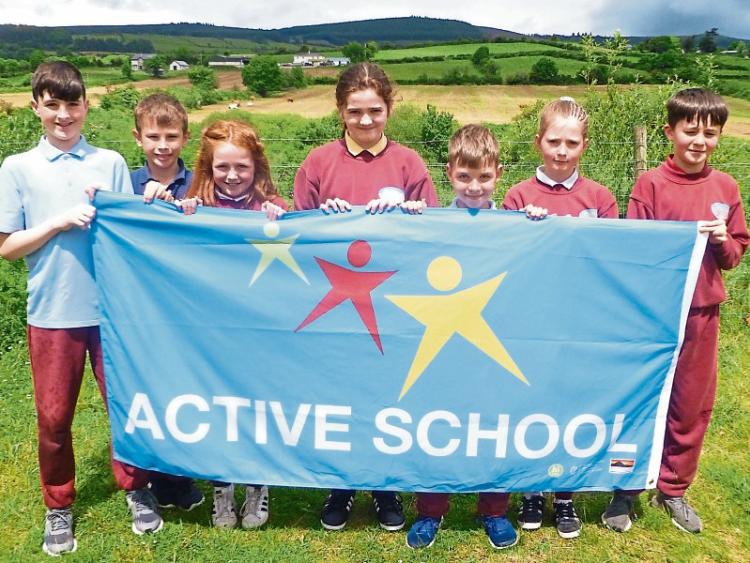 BILBOA NS has been awarded its first ever Active School flag.

It is the equivalent of the Olympic flag to primary schools and they had their very own Olympian, Rosemary Ryan, to raise it.

This prestigious award is given to schools who “strive to achieve a physically educated and physically active school community”.

Brian McMahon, principal, said it has been a lengthy process which began in school last September.

“Staff and pupils of Bilboa have been busy keeping active all year through sports and activities suitable for all to take part in. One of the pinnacles of the process was our Active Week in school back in May.

“Active Week saw the introduction of some new sports such as cricket, rugby and tug of war. We even took a break from written homework for the week and pupils completed active homework which proved very popular,” said Mr McMahon.

During the year, pupils were very fortunate to take part in activities such as zumba, Irish dancing, gymnastics, swimming lessons, yoga, GAA coaching, soccer competitions and Friday discos in the yard to name a few.

“The girls recently won the East Limerick Cumann na mBunscol camogie competition played at the Gaelic Grounds. An Active School adjudicator called to us in June to examine the progress we had made during the year, and she was very impressed with the level of physical activity she witnessed,” said Mr McMahon.

The culmination of all their efforts was when Bilboa native and former Olympic athlete Rosemary Ryan raised their Active School flag on June 21.

“Well done to all pupils and staff,” said Mr McMahon. They can all now enjoy a very well deserved summer rest!