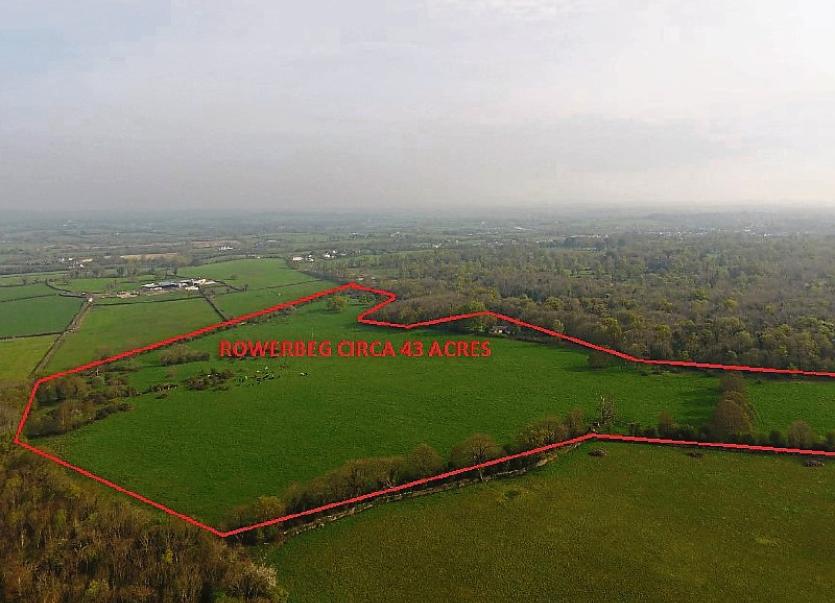 The farm at Rowerbeg Adare is bound to be popular according to auctioneer Tom Crosse, GVM

NO, dear reader, you are not experiencing déjà vu, GVM has another farm of land for sale in Rowerbeg, Adare.

Now he is back, gavel-ready, with 43 acres at Rowerbeg, Adare.

“It is literally across the road. It is very good land all surrounded by mature woodland. The land is laid out in easily managed divisions, well watered and fenced.

“It is located only 1.5kms from the village of Adare and has frontage to the main Limerick-Killarney Road,” said Mr Crosse.

“Hopefully it should attract some business interest coupled with agricultural interest. It is going to auction at the end of July. Interest has been good to date.

“It is a very, very good piece of land as is all the land around Adare. Generally Adare land is good quality,” said Mr Crosse.

A bungalow on the farm, which is in need of repair, adds a lot of value as it practically guarantees planning for a new dwelling.

He will be hoping history repeats itself and a farm at Rowerbeg goes for well over the asking price.

“The previous sale underpins the interest in the area. It is driven by the resurgence of Adare Manor and the esteem in which Adare is held. It just drives the market out there,” said Mr Crosse.

The rumour after the auction in April was that the buyer of the 42 acres was an Adare-based businessman who had a solicitor bid on their behalf. Mr Crosse remained tight-lipped but would say €970,000 for the 42 acres was a “record price” for agricultural land in County Limerick.

He did sell 27 acres in Adare over Christmas for €38,000 an acre but that price was skewed by some of it being zoned development land. Farmers in Adare are sitting on green gold.