Limerick student shows his art is in the right place 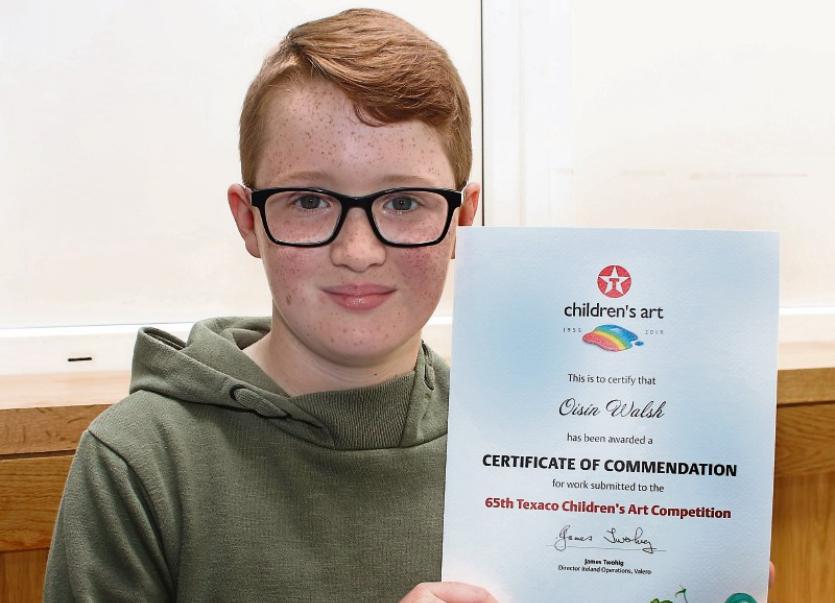 Oisin Walsh with his certificate from the Texaco Children's Art award

A LIMERICK lad has shown his art is definitely in the right place, after a painting of his brother scooped a major national award.

Oisin Walsh, 11, a fifth class student at Christ the King boys national school in Caherdavin, hit the canvass to paint a portrait image of his younger brother Daire, who is 10.

He was surprised last week when a letter came from the Texaco Children's Art competition with a letter, saying he was a winner.​

“I feel inspired when I get a paintbrush in my hand,” the youngster told the Limerick Leader. “I like painting anything from scratch. I prefer to paint without the things in front of me.”

Asked how he felt when he received the certificate from the Texaco competition, he admitted he was surprised.

“I didn’t really expect it. But I’ll definitely do a bit more art in the future,” he said. “I might try a few more portraits next.”

Asked how his brother felt about his own portrait, Oisin said he thought it was “nice”.

“He set up a position in the lovely light of our new Blath na nOg extension and was working on it for a few days. He’s very talented. He really does like art, he does a lot at home,” Mr Hassett said.

Fellow teacher Breda Flaherty added: “This lad is very talented. He really likes art, he does a lot of art at home.

“It’s fantastic. The standard in the Texaco art competition is really high so to get an award is absolutely brilliant for him,” she added.

Oisin is photographed here with his certificate, and in the early stages of sketching out the picture of his younger brother Daire.