Harnett clan bringing it all back to Limerick heartland 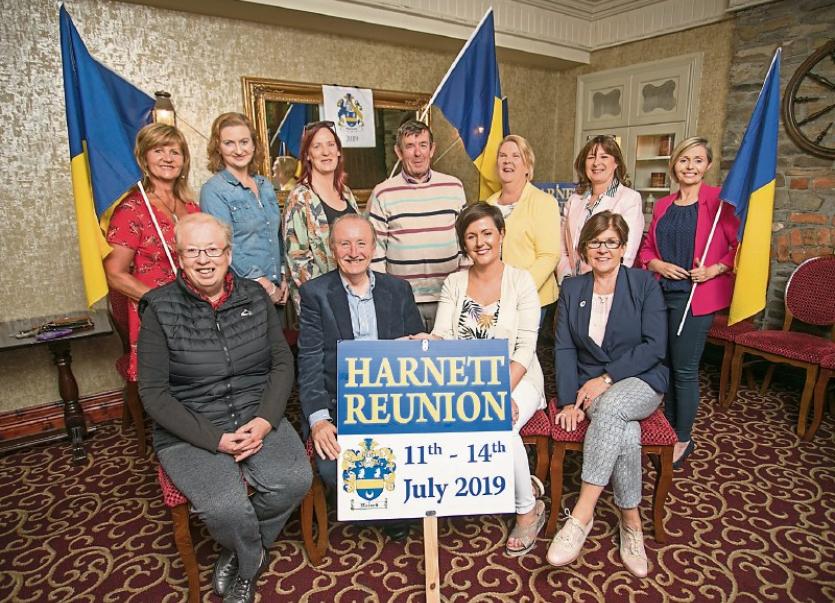 A CLAN gathering of Harnetts in their spiritual home of West Limerick is generating great excitement and anticipation as the five day event approaches.

Running from Thursday, July 11 to Sunday, July 14, it also promises to be a big event in its own right with scores of Harnetts and those with Harnett connections travelling from near and far to take part.

They are, says James Harnett, chairman of the organising committee, coming from New Zealand, from Australia, from the UK, the US and Italy.

There is even one woman Margie Welsh coming from Hawaii, he revealed while another clan member, Peter Harnett, born in India, will also be in attendance.

“It all started in 2012 as a kind of social thing in a small way when we organised a Harnett get-together,” James explained. “But there was a huge demand from abroad to do it again.”

This time out, however, he added: “We went after the genealogy in a big way.”

On the first full day of the five-day event, there will be a series of talks from experts about the Harnett diaspora and in the afternoon a team of professional genealogists will run workshops to help participants clarify and copperfasten their Harnett family trees.

But the gathering also promises to be a very sociable and hugely entertaining event.

A big variety concert will be held in Halla Tadhg Gaelach in Tournafulla on Friday, July 12 and the headline act on the night will be tenor Brian Harnett from Newcastle West.

India born Peter Harnett and his family’s ballad group will also perform along with a drama excerpt and plenty of traditional Irish music and dancing.

“On Saturday morning we will visit Fullers Folly in Newcastle West, built by one William Fuller Harnett in 1859. One of his descendants will be there to speak,” James explained.

They will also visit the Desmond Castle and pause at the Michael Hartnett sculpture in the Square before moving on to the Foynes Flying Boat and Maritime Museum and coming home through Athea.

Saturday night there will be a Gala Banquet in the Devon Inn Hotel, with a sumptuous dinner, wine, live music, dancing and a piece of the Harnett Reunion Cake.

Sunday morning, the Harnetts will set off on a tour of sites around Abbeyfeale connected with the family, including the monument to Patrick Harnett shot by the Black and Tans in 1920, and the old graveyard in the Square where a Harnett tomb goes back to the early 1700s.

They also hope to visit Moynsha House, once home of the Creagh Harnetts but restored by the late Patsy Byrne.

The tour will finish with Mass in Duagh, where a chalice from Famine times, brought to the US, passed down through the Harnett families in the priesthood and now in St Patrick’s Cathedral New York, will be brought home and used for the occasion.

In addition, the organisers will be publishing a special 88-page magazine with information and articles on the Harnett clan and some local history in time for the reunion weekend. They have also commissioned t-shirts, notebooks, keyrings and other memorabilia which can be bought throughout the weekend.

Anybody interested in any of the events will be welcome to do so.

Tickets for the Variety Concert cost just €10, while the Gala Banquet tickets cost €40 as does the Saturday tour. Friday’s genealogy events are free. Booking is recommended by emailing harnettreunion2019 @gmail.com or calling 087 2500929.