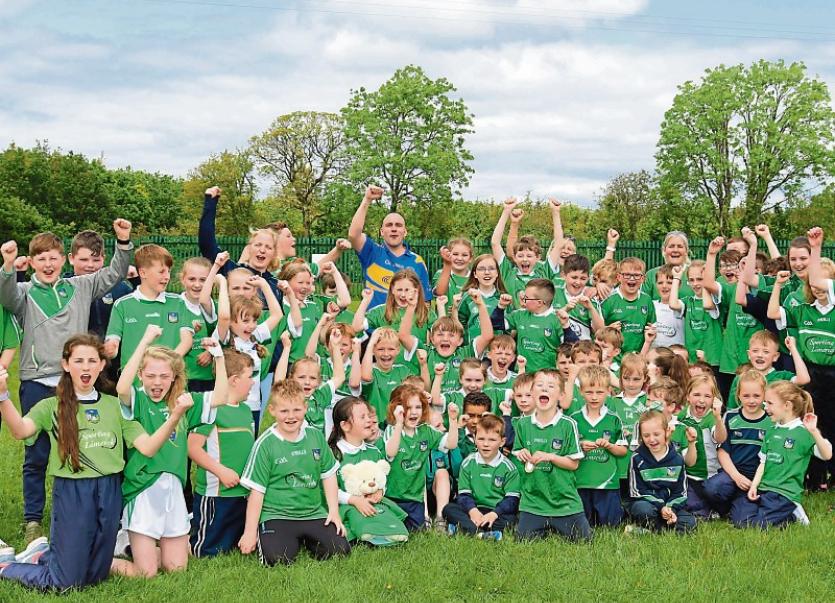 THE PHOTOGRAPH above might imply there is Limerick and Tipperary sporting rivalry in Castleconnell NS but they are all on the same team when it comes to raising funds for an astro turf pitch.

They are all looking forward to the Mid Summer Run in the village on Sunday, June 23. The 5km and 10km commences at 1pm.

All monies raised will go towards the Castleconnell Community Sports Facility. Plans started back in 2014. A 50m x 35m astro turf pitch at the back of Castleconnell National School is phase one. Future plans included basketball courts, floodlighting, walking track, dressing rooms and car parking facilities.

Richie Ryan, principal of Castleconnell NS, says the facility will be an essential sporting outlet for residents of Castleconnell and surrounding areas. Currently there is nothing like this amenity in the locality.

“The objective of this project is to provide a modern sporting facility for the pupils of Castleconnell NS during the school day for physical education and also as a play area for break times. It would also be available to the school for organised after school activities such as hurling, soccer, athletics and basketball etc.

“Outside of these times it is envisaged that the facility would be made available to sporting organisations in the area for training purposes.  Currently there is no amenity of this nature in the locality. It is planned that this facility will cater for people of all ages,” said Mr Ryan.

The school has organised 18 fundraisers to date with the Mid Summer Runs being a huge part of it. So far they have collected €45,700. A Sports Capital Grant for €64,300, which the school applied for in partnership with ACM Community Games and Ahane Camogie Club, brings the total to €110,000.

The cost of the astro turf pitch will be around €175,000. Mr Ryan says a big final push is required over the next five or six months beginning with the Mid Summer Run on Sunday, June 23.

The 10km route is officially measured and licensed by Athletics Ireland with chip timing being provided by Titan Timing. Log on to http://www.midsummerrun.ie to register.

Mr Ryan says the pitch has been put out to tender and all going well they hope to break ground early next year.

“We continue to receive fantastic support from local sports clubs and the community in terms of sponsorship, and goodwill on the day of the Mid Summer Run. We are also blessed to have a very hard working parents association who are very committed to seeing this project through to the end,” said Mr Ryan.

See this week’s Limerick Leader to see more on the Mid Summer Run.