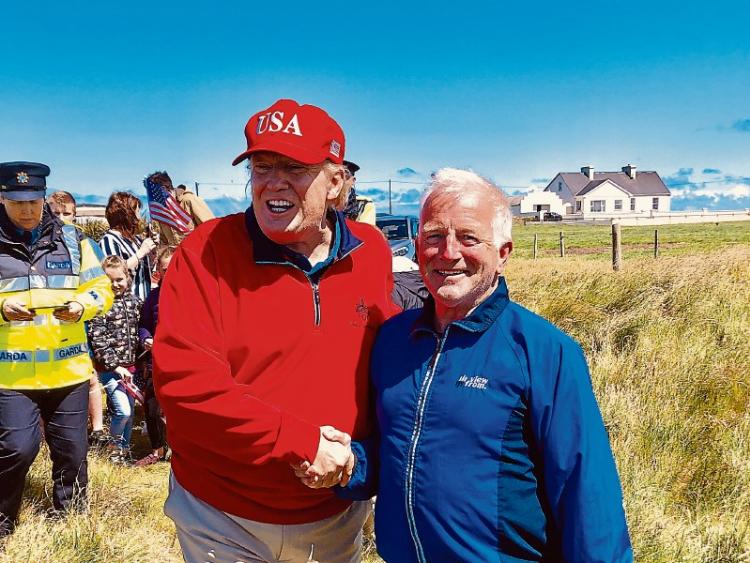 A COUNTY Limerick man and the American president found common ground over a wall.

Liam Ryan, originally from High Street, Caherconlish met Donald Trump while out for a stroll in his new home of Doonbeg on Sunday.

Mr Ryan, one of the founders of Ballyneety Golf Club, is now trying to save the one in Doonbeg. He is PRO for the Doughmore Coastal Protection Group who are fully behind Trump’s plans for coastal protection works.  An Bord Pleanála are currently considering an appeal against Clare County Council’s decision to award planning permission for the construction of a 38,000-tonne rock barrier.

Structures running to 1km, on two stretches of coastline to the west of Trump International Golf Links & Hotel Doonbeg Ireland, aim to prevent further coastal erosion at three holes on the course.

On Friday morning around 11am, Liam left his house for a stroll.

“I went for a walk through the fields. I just happened to be there on the golf course.  Children from the school were there.  Trump was a good distance away, the children had their flags and they were waving them.

“The Special Branch just mentioned to him on the phone that there was children down here if you'd like to give them a wave. So what he did in actual fact was he walked down the hill, a long distance, to meet the children. He asked that the rope be removed, he talked to them and had a good chat with them,” said Liam.

Before he knew it, he was shaking hands with the leader of the free world.

“I was just looking on and then I was introduced to him by the manager of the golf club Joe Russell as being the PRO of Doughmore Coastal Protection Group. I had a few words with him. I was cool as a breeze because he was very pleasant. The children had no problem in talking to him either. I had a few words with him and he thanked us for what we were doing for the community.

“I told him we wanted him to have fair play like everyone else and we were backing him because it’s right and we appreciate the jobs in the area. They have lodged major plans too for a function room and leisure centre.  Moneypoint is the only reasonable employer in west Clare. They’re leaving people go constantly.”

Liam says the coastal erosion issue is a man-made problem.

“From 1943 to 1957, the stones were crushed at both ends of the beach and taken away by Clare County Council to be used for roads. There are no defences there now. Mikey Whelan, who is 96, worked on it and recalls the stone being hauled away by horse and cart. I’m not blaming the council. There was a lot of things done in the past that people didn’t realise the consequences.”

Saying President Trump divides opinion is the understatement of the century.“I’ve always had a sense that he’s a man who says what he thinks  and people might not like his approach. He’s unusual for a politician because normally they will tell you what you want to hear. He is also a man that makes decisions. One of the major difficulties that we have in Ireland at the moment is that the Government is elected to make decisions but they have put bodies between themselves and the decision making.”

Liam, who appeared in an All-Ireland minor final in 1965, with Limerick played with many powerful men including Eamonn Grimes and Pat Hartigan. But he says he will never forget the day he met the commander in chief.