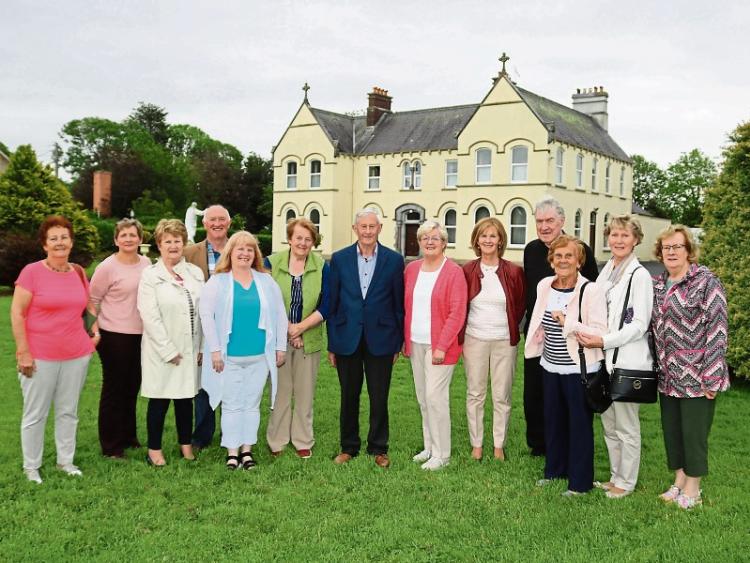 THE CONVENT in the heart of Cappamore has been home to Sisters of Mercy since 1898.

A hole will be left in the parish after it was announced they are to leave at the end of the month.

A Mass of thanksgiving and farewell to mark the departure of the Mercy Sisters takes place this Sunday, June 9 at 11am in Cappamore. Refreshments will be served in the community centre after Mass. All are welcome and especially past pupils of the convent school.

A group of locals from many organisations came together to organise the event and spoke to the Leader about their memories. Maura Walsh said when they heard the news the convent was closing last March there was disbelief and sadness.

“It is the end of an era. The convent and nuns were such an intrinsic part of the parish. They first came in 1896. The convent house was built in 1898. It is such a central part of the village – the church, convent and school,” said Maura, a former pupil and then principal of the convent school and Scoil Chaitriona - an amalgamation of the girls and boys school.

The three remaining nuns, who have given decades of service in and out of the classroom, are Sr Mercy O’Dea, Sr Assumpta White and Sr Joan Bradshaw. They will move to a convent in Tipperary.

One of the oldest former pupils, Kitty Ryan, aged 92, can remember attending the convent school as a little girl.

“They were lovely. They were great nuns and great teachers. They were strict but good,” said Kitty.

“The three are lonely already. It is sad really,” she continued.

One of the people who knows them best is parish priest, Fr Dick Browne.

“I’m going to miss them terribly. They have been very good to me. They come to Mass every morning and I went over for a cup of tea afterwards. They are here 123 years which is a very long time. They did so much good over the years and they did it very quietly. They looked after a lot of people when people had very little or nothing,” said Fr Browne.

A recurring theme is the kindness of the Cappamore Mercy Sisters. Betty Fleming recalls that every Christmas Day they opened the convent at 3pm.

“The little children from the street - we all came up with our presents, not that we got much. It was a big treat to show them what Santy brought us. They had sweets for us and we played games in the community room,” said Betty

There are many stories of the nuns giving bread, butter and sugar to those who were going hungry. It was all done quietly.

“I’d like to thank them for their contribution to Cappamore and I’m very sorry to see them go. We’re going to honour them on Sunday week and give them a good send off,” said Noel.

Just like the Christian Brothers, he said the Sisters of Mercy ensured everyone got a good education. If a schoolbook cost half a crown but the pupil’s family couldn’t afford it the religious orders ensured they got the book for free.

“I started in 1964. I liked music and drama and we did music and singing in the convent. They were so nice. They would say heat your hands at the fire before you play because your hands would be cold. And at the end they would go down the big long corridor and bring you back a chocolate.

“Anybody who didn’t have a lunch had a lunch given to them. Nobody ever knew but that sense of kindness was always there,” said Julie, who recalled a new family coming to the parish who were very poor. One of the children was receiving their Holy Communion and the nuns ensured the child was “decked out to the nines”.

Marie Hayes recalls how times have changed for nuns.

“Rules were much stricter. The nuns didn’t have the freedom they have nowadays. I can remember when they wanted to post a letter they would have to go down to the gate and wait until someone was passing, call them over and ask them to post the letter,” said Marie.

The nuns didn’t stop working in the community when their days in the classroom concluded either.

Former SNA, Patricia Hayes said that Sr Assumpta continued to help even though she retired as the last Mercy Sister principal in 1996.

“It is very sad and very upsetting to see them go,” said Patricia.

After retiring as principal of St Joseph’s Secondary School, Sr Mercy headed up the FAS scheme in Cappamore and managed St Michael’s day-care centre for years. She is still involved to this day.

The nuns were involved in setting up and contributing to so many organisations.

“Only for her we wouldn’t have ICA in Cappamore and it is going strong,” said Joan. Sr Frances Theresa was the church choir director. The local pioneers, Mercy Associates and Legion of Mary and many more were strongly supported by the nuns.

But while the Mercy Sisters may be leaving Cappamore their legacy will live on said Eamonn Mullane, chairperson of Scoil Chaitriona’s board of management.

“We owe our existence to the sisters. The reputation of the school children in secondary school is still very high. The local principal said to me recently that one thing she could say about the children in Scoil Chaitriona is you could bring them anywhere - on a school trip or anything - they are the best behaved and most attentive.

“I believe firmly that the ethos of the school that was passed on by the nuns originally has stayed. There is a strong Catholic ethos in the school and there has always been an ethos of kindness and decency,” said Eamonn.

It is understood that the beautiful post Victorian building will be put up for sale. It is very well-maintained inside and out. The entire fascia and soffit is cut limestone as are crosses on the roof. The proposed sale of the convent will have no impact on Scoil Chaitriona.

All are welcome to say thank you to the current Sisters of Mercy and those that have gone before them this Sunday in Cappamore at 11am Mass and afterwards in the community centre.