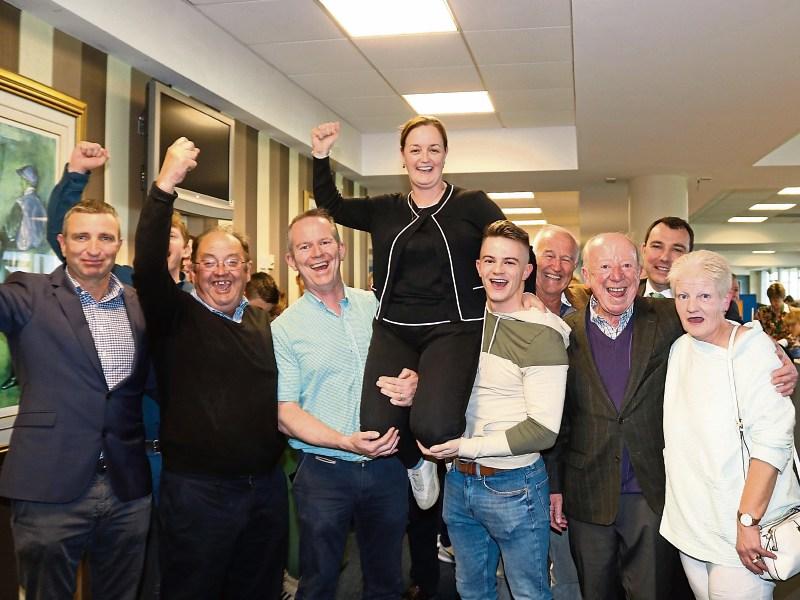 Bridie Collins is lifted aloft by her supporters following her election

“I am really delighted. I didn’t expect to come in on the fifth seat,” a rather surprised Bridie Collins said after she was elected as a councillor in the Adare Rathkeale area.

Ms Collins, based in Adare  and Trina O’Dea, based in Croom,  were first-time candidates for Fianna Fáil and running along with long-serving councillor Kevin Sheahan.

Not surprisingly, she polled strongly in Adare, with tallies indicating she got over 40% of the Adare vote. With 986 first preference votes, she was ahead of Trina O’Dea from the very beginning, a lead she  maintained throughout the count.

Significantly, she also started ahead of her main rival Leo Walsh of Fine Gael and the party’s surplus failed to put him decisively ahead of her. It was Trina O’Dea’s elimination that catapulted her into fifth place, 15 votes ahead of Kevin Sheahan and 168 votes ahead of Leo Walsh.

“I have learned so very much,” the first-time candidate said, who admitted to finding the whole count process interesting.

“I loved the canvassing, meeting people, listening to their stories.”

And she is really looking forward to getting stuck into her new position. “Now I can’t wait to get in there, and making a real good start, bringing fresh, renewed enthusiasm to it.

“I do a lot of work with Tidy Towns and a lot of voluntary work. I am hoping, as councillor, to get involved with different community and voluntary organisations.”

The new Limerick to Foynes road, which will by-pass Adare, will be one of the major issues for the area in the coming years, she said. It was a big issue on the canvass, she said, as the traffic congestion affects not just Adare but a whole number of other villages and areas as well.

“The sense of pride in what I have achieved is huge. For people to come out and vote for me is humbling.”