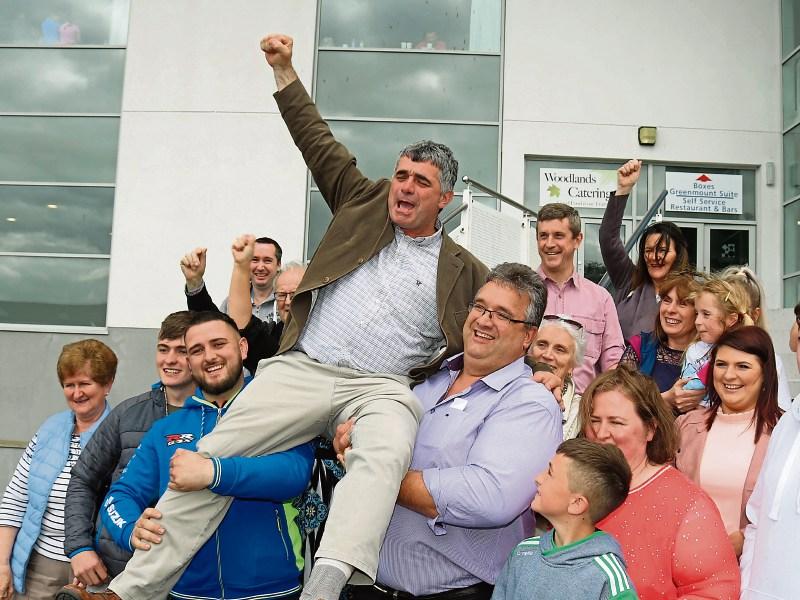 FINE Gael narrowly missed out on a third seat in Adare Rathkeale and better vote management could well have secured it.

The party polled 5,421 first preference votes, more than three quotas. But in the event, , the party was pipped to the sixth and final seat by a narrow margin of just 153 votes, leaving their third candidate and former councillor Leo Walsh disappointed  and tasting defeat yet again.

But this loss went largely ignored because of the runaway victory for Fine Gael’s Young Turk Adam Teskey and a resounding personal best by his running mate Cllr Stephen Keary, which  made for a lively start to the count in Adare Rathkeale.

Fine Gael drove their vote to a resounding 43% share of the vote against the 25% the party achieved nationally.

Adam Teskey, pictured below with supporters, was their undisputed star, topping the poll with a massive 2,459 first preference votes, the second highest achieved across Limerick. It was a huge achievement for the young Reens Pike man, who was going before the electorate for the first time, having been co-opted to the council following Tom Neville’s election to the Dail in 2016. 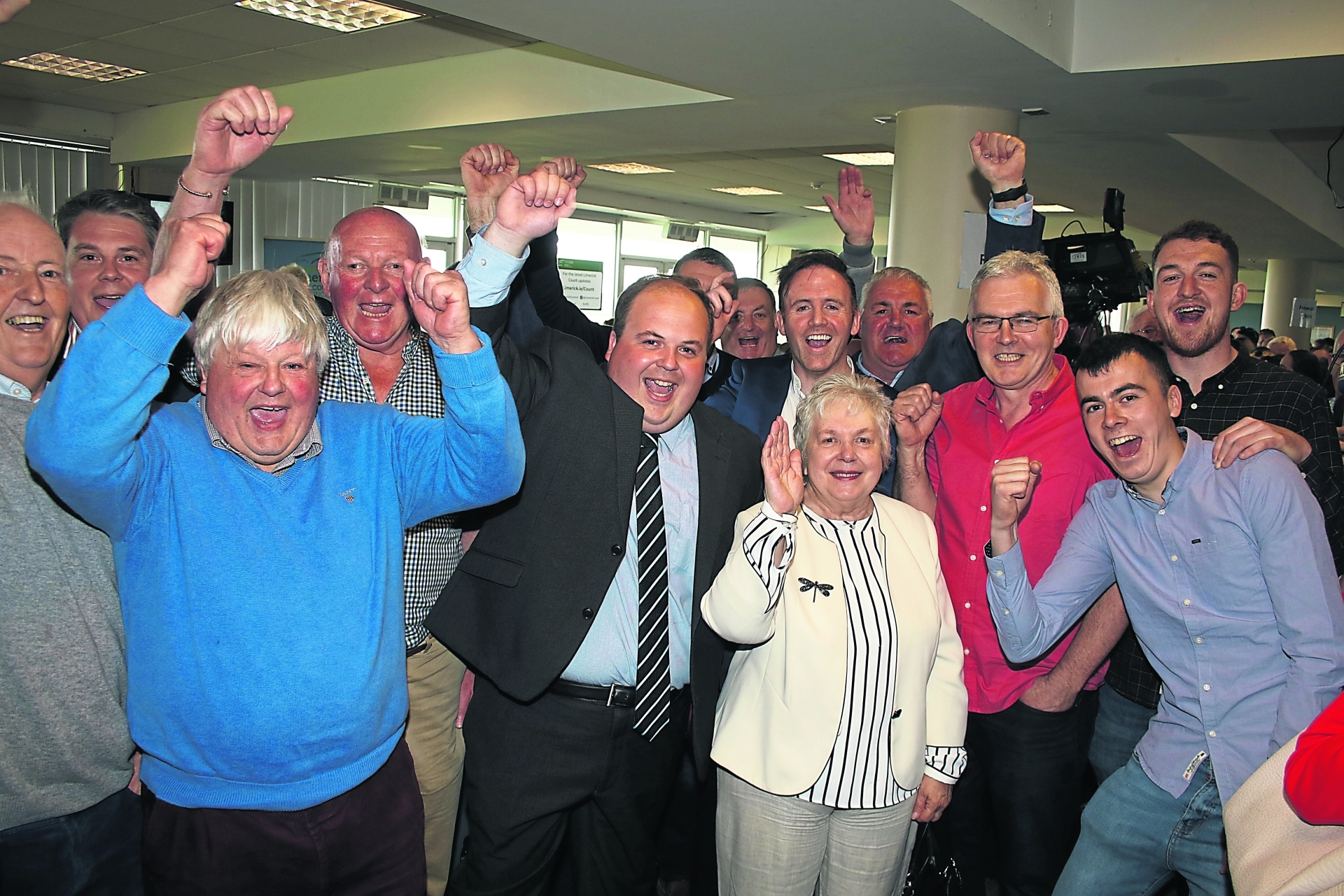 “I am very humbled with the vote I have received and very encouraged the electorate have voted for me in the way they did,” he said. He was going back into the council with a large mandate, he said and was  looking forward to building on that foundation and to delivering to the people.

His party colleague, Cllr Stephen Keary, who increased his vote to 2,082 and was elected on the first count, was also very pleased to be. "I am extremely humbled. It is a fantastic vote," he said. “I fought a hard campaign, and a clean campaign for the last three months. I am honoured to be elected for the people of Adare Rathkeale. “

Between them the two had a surplus of 991.

The very accurate tally also ensured that Independent Richard O’Donoghue went into the official count on Sunday a happy man. He polled 1,751 first preferences, almost doubling his vote from 2014 when he had been in the Fianna Fail camp. He put his success down “ to hard work, working on the ground with voluntary and community organisations for the betterment of the Adare Rathkeale area.” But while being prepared to work with anyone and everyone for the good of his area, he had no thoughts of returning to the old fold.

Independent Emmett O’Brien, who topped the poll in 2014, saw his number one votes dip to 1,566, but still leaving him very comfortably placed to take the fourth seat. Cllr O’Brien, who also originally came from the Fianna Fail camp, is intent on remaining Independent.

Fianna Fail, who had three candidates well dispersed around the district, polled fewer first preference votes than in 2014 but still managed to convert it into two seats, both of them without reaching the quota. Nevertheless it was a very welcome bonus of one for the party as they return to the council.

And while the Green Wave that swept other parts of the country did not materialise in Adare Rathkeale, Green Party candidate Theresa Storey polled a credible 538 first preferences on her first hustings. Direct Democracy Ireland stood two candidates but came late into the fray and polled just 149 votes between them.

In 2014, Adare Rathkeale, along with the other municipal districts in the county returned a Sinn Fein councillor. But Ciara McMahon decided earlier this year she would not be contesting the seat and the party failed to put up another candidate.

How a  new and untried candidate would have fared in this election we will never know but with strong sitting councillors like Seamus Browne and Séighin O’Ceallaigh falling by the wayside as the Sinn Féin tide ebbed, it is unlikely he or she could have held the seat.

From the beginning, the absence of a Sinn Fein candidate left the way open for change: the question was who would be able to take advantage of the opening?

The possibility of the Greens making a breakthrough was there but the more likely prospect was always that either Fianna Fail or Fine Gael would make a gain.

In the event, victory went to Fianna Fail, with first time candidate Bridie Collins taking the fifth seat, 15 votes ahead of her running mate, long-serving councillor Kevin Sheahan who has clocked up 34 years of council service.  From the very beginning, Ms Collins was ahead of the party’s third candidate Trina O’Dea and retained her lead to the last.

There was, the new councillor said after she had been elected, a very strong feeling that Adare needed a local councillor.