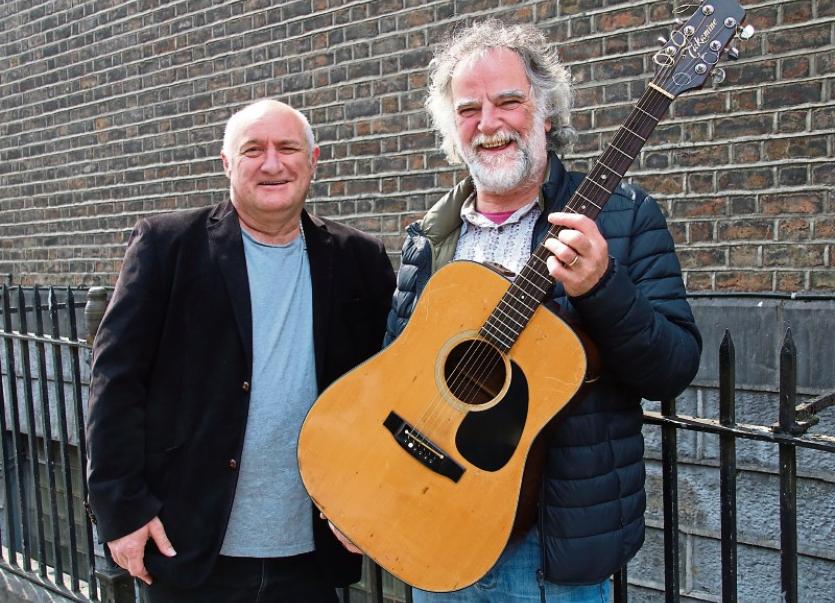 I WILL still be here. I have no thoughts of leaving.” More than 30 years on, and this is the line that resonates through an opus of fresh and freshly-rehearsed tracks that sum up a life of music.

A life of music, all physically compacted into a single disk with supplementary sleeve notes and artwork. An evidential and tangible display of authentic creativity after four decades.

And that line, from Sandy Denny’s Who Knows Where The Times Goes, is as delicately sung by The O’Malleys as if they had just started their career in Red Door Studios in Limerick yesterday.

But even though it’s a 13-track project layered and condensed with mellow nostalgia, the veterans’ new album is, in a way, the beginning for the band, who has had a line-up of some of Limerick’s most revered musicians through the years.

Can You Hear Me is The O’Malleys’ debut full-length album — some-30 years after they formed as a three-piece with a penchant for touring Germany’s folk scene.

They were, according to us in 1988, the “Limerick group which the public either love or hate”. They were — and still are — a band who has had a strong rapport with their fans up and down the country.

In the late 80s, they were that versatile collective that could wax lyrical, strut with their strings and make a joke all at once.

If you search The O’Malleys on YouTube, one of the first search results that strikes out is their 1988 Christmas special for the Suil Thart Gaeilge programme, a 20-minute spectacle of absurdist hilarity and talent.

The introductory song is somewhat of a reincarnation of Ian Dury & The Blockheads, bringing funk to a rambling house. Fast-forward 10 minutes, and you’re left with an endearing honky-tonk about a chicken, or moonshine or a woman called Alice.

Dave adds that they never took themselves too seriously, but always took the music seriously.

“Pete was always a prolific writer, so there was always original material thrown into the mix of things. And then a bit of madness. It was always peppered!” laughs Dave, owner of Red Door Studios and is also a session musician with Van Morrison in his portfolio.

It was the early 1990s when The O’Malleys became a staple in the Irish music scene, playing all the main venues such as Midnight at the Olympia, Whelan’s, Dolan’s, Cork Concert Hall and The Waterfront.

Then there were the television appearances; The Late Late Show, Sunday Night at the Olympia, the Brendan Grace Show and Nighthawks. Last, but not least, there was the international touring of the States, England, Russia and Europe, thanks to their trusty red Volkwagen van.

And the verve clearly still remains.

“So, what number album is this?” I ask, completely ignorant.

“This is number one!” Peter replies, almost delighted that the question was put to him.

It’s a cliched question, but I ask if there are any contemporary acts that have inspired them during this project, which started around November 2017.

And quite confidently, they both respond: “No, not really, I don’t think so.”

“We’re at this a long time,” Dave adds. “Being in the band is a funny thing when you know the members musically and personally. There might be disparate and varying influences and varying styles, but when you put that group ensemble together, you do get a cohesive sound, a signature.

“So, influence-wise, it is what it is. The songs are what they are. We are not dictated by any trends. You can’t be, because then you are in a losing battle.”

The band has had quite an impressive repertoire of musicians, and the current make-up is Peter, Dave, Brian Mulcahy, James Hanley, Eddie Clancy and Ger Costelloe.

And through the years, The O’Malleys have lost cherished bandmates. In December, they lost guitarist Tom Cronin who was with the band since their golden era.

“He was a fabulous player,” Peter says.

Other late members of the band include Dessie O’Dwyer, Alan Cheevers and co-founder Dudley Herbert.

The album, the two say, does feature a tribute to the members of The O’Malleys who have passed away.

Can You Hear Me is steeped in sagacity, a kind of catharsis for the seasoned musicians and people who look back on halcyon days, but look forward in eager hope.

Some songs are odes to particular places, such as Peter Donnelly’s Denmark Street, and others are to unique, drinking-til-dawn memories, such as Brian Mulcahy’s Ghosts.

And others simply do not require words to embrace the spirit of tapping into one’s own unbridled creativity, as evidenced in Dave Keary’s velvety instrumental The Resilient Sun.

Peter admits there is not exactly humour in this release, but not for any particular reason.

“We wanted to do this album and we said might as well do some originals and some covers that we do.”

And with every album, there is a promotional drive, and their itinerary is pretty straight forward.

“We’re doing June the 6th first!” they laugh before Dave adds: “And we will see what happens after that. This is extremely important to us and our long-term fans and family members. It is a big one for us.

“But I think we have achieved something really, really great, and that is something we are really proud of.”

And for those who want to experience this special record live, The O’Malleys will be performing at the Lime Tree Theatre on Thursday, June 6 at 8pm, with tickets on sale at €20. However, it is understood that tickets are selling fast.

Now that The O’Malleys have finally released their debut album, it might be presumptuous to suggest that the band won’t be going away anytime soon.

“I think we’re a best-before,” Dave laughs. “Individually, there is probably a best-before but we’ve probably expired! But collectively, it’s going to go on as long as we can go on.”