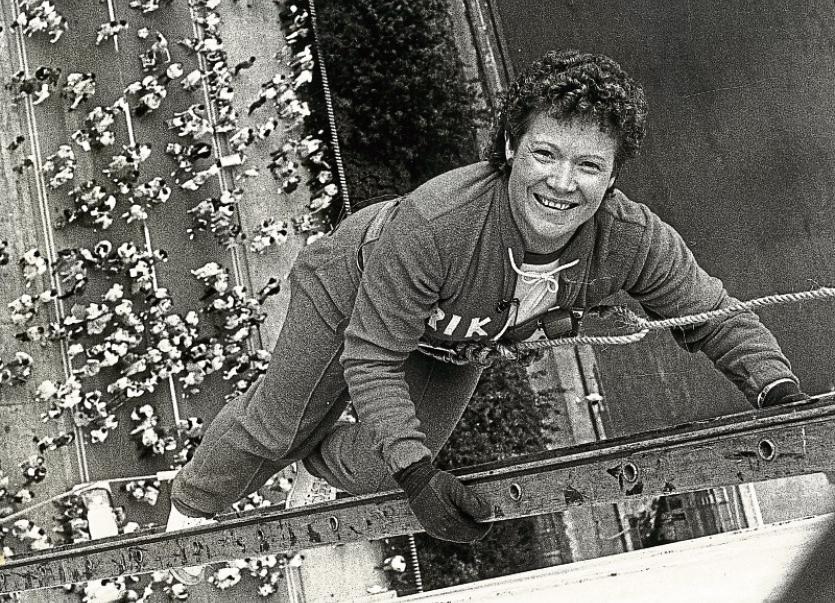 Angela Collins, Ireland's first steeplejill will be abseiling from Thomond Park for charity

ANGELA Collins has shown no sign of slowing down. Following on from her recent last-minute abseil in Croke Park, she is going one step further and organising her own Thomond Park abseil as promised.

There are a number of beneficiaries lined up, namely local charities, The Cari Foundation, Cliona’s Foundation and Children's Grief Centre which helps children who have been troubled by bereavement, separation or divorce.

Angela, who hails from Kilkishen in County Clare,  is excited to be organising the event, in association with Live 95.

“I’ve come out of retirement for this. I turned 76 last week and I’ve come across a lot of helpful people who I am hoping will get on board,” she said.

Angela is no stranger to heights, having set up Ireland's first steeplejacks, Collins Steeplejacks, which is still operating out of Ardnacrusha.

She insists however, that anyone can get involved in the event. “I see young people doing it all the time and they love it, but I’m asking people of all ages, it’s completely safe and it’s great craic, while raising vital funds” she said.

Angela recalled her experience of a similar event in Croke Park recently. “I was dressed in a guna and heels as myself and my husband Jim originally went to support our three daughters as they did the climbing.  When I saw them all I got the buzz of excitement and I couldn’t resist, next thing I knew I was borrowing a jacket off of Susan Kennedy and running after the group,” she laughed.

“It was such a proud moment to get to do it with my daughters, 30 years after my last climb on Best’s on O’Connell St.”

Having suffered a run of bad health, including four heart stents, Angela surprised herself with how well she coped. “I feel so invigorated since, I’ve come to the realisation that I am only at the last third of my life,” she smiled, adding that the organisers treated her just like everyone else.

“I’d love to see some more oldies get on board, we see young people doing it for stag nights and hen nights all the time. There’s no reason why we can’t” she said.

The Leader will follow with more details on the event and how to apply closer to the event.