OPINION: Restoring some power to local politics will rekindle our love for elections 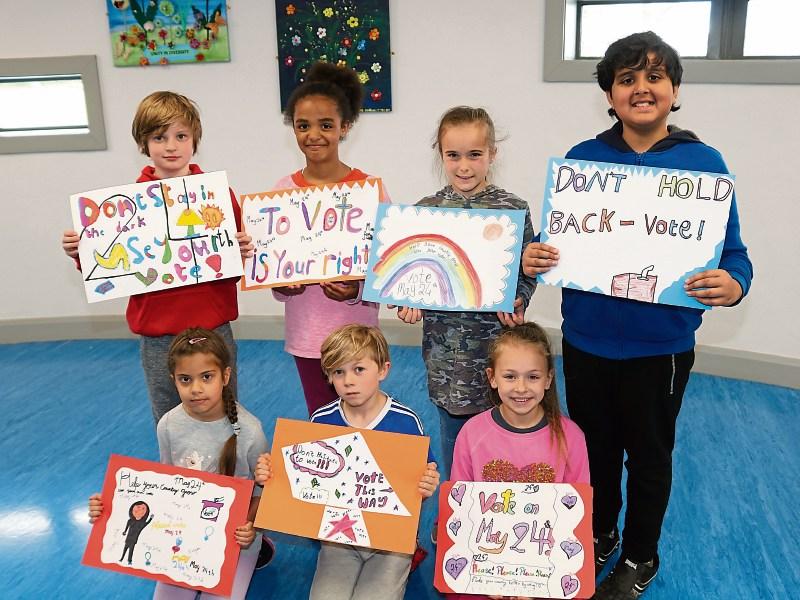 Pupils from Educate Together in Mungret with their posters asking people to vote Picture: Michael Cowhey.

AFTER decades of exercising the franchise in lathers of sweat, with the temperature soaring to 104 at times, we finally seem to have developed some kind of immunity to election fever. This is a great pity, because I’ve always rather enjoyed being laid low with the fever. Sometimes, it was actually quite exhilarating.

The ‘fevered brow’ has certainly abated as far as local elections are concerned. I say this because there isn’t much sign of excitability – as distinct from excitement – in this particular election campaign. The European election is slightly more animating, but not much, to be honest. Maybe it was a mistake to hold them on the same day.

Anyhow I miss the election fever that once prevailed. I miss it like the plague. Whatever about its enervating effects afterwards, it was vital to our sense of involvement. It was a bit like the Munster hurling championship, lifting you to dizzying heights and the wildest possibilities one minute, and, just when you thought the blood pressure couldn’t take anymore, dashing you to the ground pitilessly and unmercifully. It is a well-known fact that the national blood pressure register always peaked at election times ever since the foundation of the State, and even the most unruffled voter was known to succumb to intense excitability. That, of course, led to all kinds of confrontations in the past, with the blackthorn stick the weapon of choice at one stage when democracy was found wanting. Election fatigue left us flattened for weeks.

Now, it only happens – if it happens at all – at General elections. It looks as if most of us couldn’t give a toss anymore about who gets elected to the local Council. I think it’s because we can sniff the impotency of the office and the dire fact that there isn’t an awful lot a brown envelope, or even a vote, can get you anymore. Candidates have only themselves to blame for being too respectful of our sensibilities. Some of them prefer to be invisible. I was watching ‘EastEnders’ the other night when I heard a leaflet landing in the letter-box. I rushed out but there was nobody there. “Sorry to have missed you,” the leaflet read. Maybe I’m just too mouthy to be canvassed personally or maybe the candidate knew I was watching the soaps and wasn’t to be disturbed.

Now, it’s all very well deciding not to be too familiar with a voter, but some of my acquaintances have no idea who their county councillors are, even though they must have once voted for them and either way, they have been represented by them on the council for the past five years. What does that say for local democracy?

Tip O’Neill once said that ‘all politics is local’, but I think he was wrong. Only the less influential kind of politics is local now – at least in this country. You only have to look at the deep chasm that is now growing between metropolitan and rural Ireland to realise that not all politics is local. The punch is gone out of Local Government. For a start, local politicians no longer enjoy the enviable status they once held in the public perception. But then I suppose you could say the same about teachers, parish priests, bank managers and even big farmers. As far as most of us are concerned, the playing field has become too level to induce any kind of a worthwhile thrill.

Time was, before the insidious erosion of local power and autonomy, when county councillors had a role to play in every aspect of life in a community, social house building, health, education, road building and agriculture. They even operated a quarry in my own county where you could buy gravel at a discount and we could have become the wealthiest county in the country if the central powers had left them at it. They might even have found gold in the end.

County Councils have long since been stripped of most of their powers, and town councils, that other worthy arm of local rule, haven’t even survived. But the Government still thinks we should now be delirious at the thoughts of a local election and in the throes of election fever if local democracy is to prevail at all. I beg to differ.

Local democracy will not prevail unless someone restores at least some of the lost autonomy to the local county councils and make them meaningful again.

We could start by giving them a bigger say in the operation of our health services. Their input in the past, despite the grudging attitude of medical professionals, was second only to that of the nuns. Maybe we should abolish the HSE, once and for all, and restore the ancient regime. Although I do remember a time when you couldn’t get into the nursing profession without having a county councillor at your back, but that was our own fault, not theirs. We were always suckers for patronage and maybe that was the root cause of our infectious election fever.

Election fever, on the local scene anyway, belongs to a time when victims literally doffed their caps to their local representatives. Now, they don’t even want to see them at their funerals unless they are family friends. It seems that we’ve become too sophisticated for that kind of patronising. Personally, I’d be delighted if the whole county council came to bury me, but I suppose after reading this, none of them will turn up.

I spent the first part of my career working for a County Council and the rest of it reporting on the deliberations of County Councils for newspapers. I was the game-keeper turned poacher, if you like. I think I may even have colluded with the erosion of their powers. But, for all that, I’ve never lost my affinity with Local Government, although like most of the country I’ve become absolutely immune to election fever.

But don’t worry; I will be casting my vote, for all it’s worth.